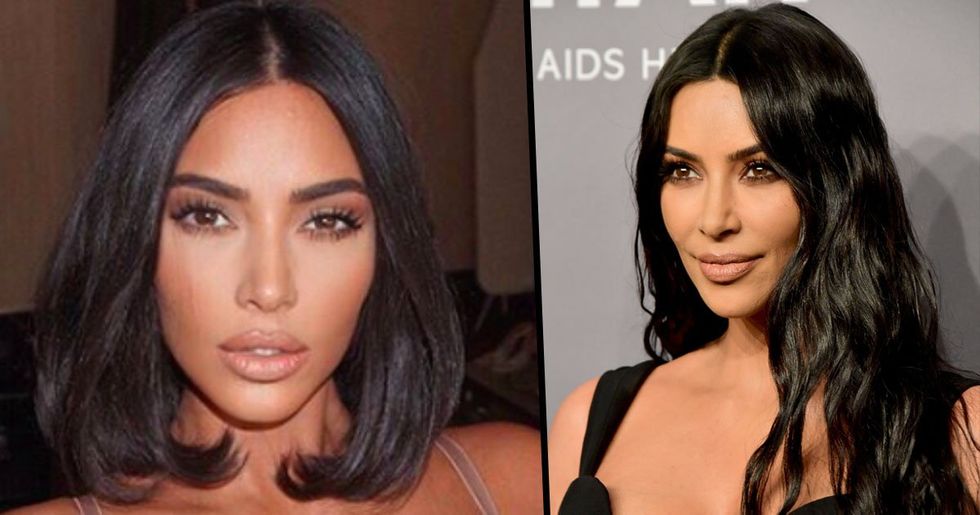 People Are Accusing Kim Kardashian of Facetuning Pictures of Her Kids

Love them or hate them, it is no secret that the Kardashian family are the most famous family to have ever graced the planet. From their ventures into the beauty industry to their hit reality TV show, Keeping Up with the Kardashians, they seem to have dabbled in almost every industry out there - well, besides the food industry, but I wouldn't be surprised if they released their own line of vegan baby food or something of the sort...

Besides all of their success, they are also known for their crazy antics that always seem to make the news. What can I say? Everyone wants to know what is going on in the glitzy world of the Kardashians. This time, Kim hit the headlines for yet another stupid mistake that she made: Facetuning her young kids... Yikes.

Keep scrolling to check out the picture in question, as well as a bunch of other Kardashian photoshop fails.

It's no secret that the Kardashians love a bit of cosmetic surgery.

It's practically what they're known for.

Every single time that you think that you know what they look like, they appear again looking completely different.

Suddenly, their lips are poutier or their bodies have been molded into a whole different shape. Whatever work they get done seems to spark a new trend among internet users and, before you know it, everyone's walking around with lip fillers and injected ass cheeks.

And we can't forget about the photoshop, can we?

I mean, I have nothing against people choosing to get surgery, but with all that money spent perfecting the ideal body, why would you then need to use photoshop tools like Facetune?

Imagine spending all that money and still having to excessively edit your photos. No thank you.

Let's check out some of the worst Kardashian photoshop fails that had the internet in stitches.

Most of these photos are still up on their personal Instagram accounts... Yikes, including the photograph of her kids who have been heavily Facetuned...

You would think that whoever was paid to edit these photos would check that they've managed to airbrush everything out correctly... or at least not forgotten an arm, right?

Well, not in this case!

Can you spot number two?

This one might be slightly more difficult, but, if you're good at paying attention to detail, you've probably got it already.

Many fans noticed that her foot seems to have two big toes. I mean, one photoshop fail in a pic is pretty bad, but two is really pushing it.

This picture would have been pretty cute, if not for the extreme bobble-head fail.

Those proportions cannot be right...

Why does her face look as if it doesn't belong on her body? And her thighs are much thinner than usual. Fans were quick to call her out in the comments saying that the picture looks completely "fake."

Recent Kardashian edits have people questioning whether they should believe anything that they see on the internet.

I'm going to put it as simply as I can for you: Don't.

Facetuning is the lastest editing trend to have swept all social media platforms.

And we're all guilty of it in some way or another.

But maybe not to this extreme extent...

Kim Kardashian's Instagram photos have faced immense backlash from her fans as they have criticized the star for looking "unrecognizable". But things have taken a turn for the worst as now, people are accusing her of involving her kids in the Facetuning game.

What kind of example is that setting for beauty standards?

That they're unattainable, for one thing. That no matter how much you try, you will never be considered beautiful without a few tweaks? It will be a hard pill to swallow when children grow up and realize they actually have flaws in real life and they don't know how to deal with it.

This seems to be the main photo in question:

I mean, we all dabble in a little editing our own pictures once in a while, whether it's brightening our skin or smoothening out some of the fine lines under our eyes. Every little helps, right? But why are we doing it to kids?

And as you'd expect, the comment section blew up with unhappy Kardashian fans.

Kim Kardashian's children are gorgeous, so people couldn't get their heads around why they were heavily edited.

"They're children!" One user commented.

We do know they're beautiful.

Facetune has become a blessing and a curse.

Don't believe everything you see on social media...

On a brighter note, here's some photoshopping that's bound to make your day.

Kirby Jenner has a "special" relationship with the star-studded family. Check out this article containing some of his best shots!