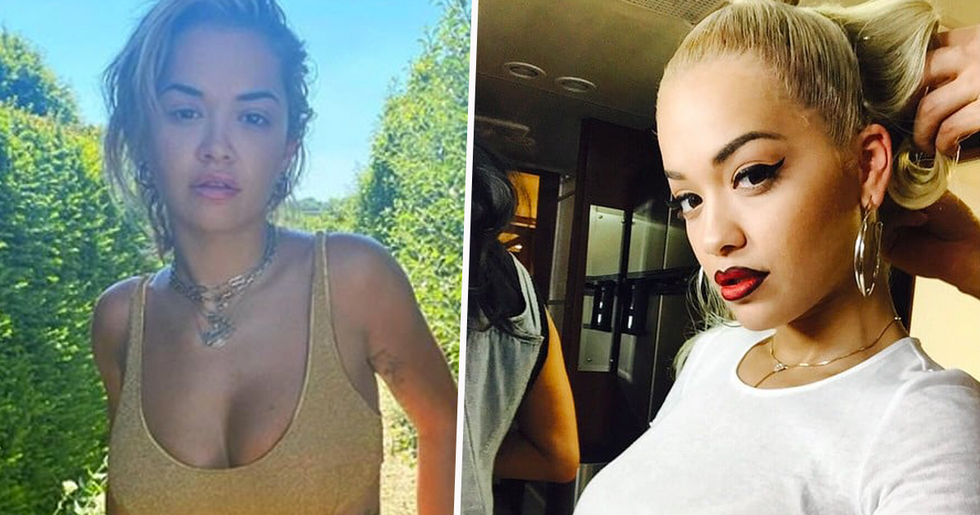 Rita Ora has come under serious fire this week after her fans had a sudden, yet damning realization about her true ethnicity...

The British singer has forever been in and out of the headlines for her highly-publicized relationship dramas and controversial actions.

In 2016, the "Hot Right Now" singer was accused of cheating by her ex-boyfriend, Rob Kardashian.

In an episode of Rob & Chyna, the reality star said not too long after their split: "I had a really bad past relationship where the girl was cheating and having sex with so many different people."

Many of her other ex-partners have seconded these claims.

Old flame, A$AP Rocky, publicly blasted Rita in his track, "Better Things," and TMZ reported that DJ Calvin Harris called it quits with Rita after she was seen getting "touchy" with Justin Bieber.

And, in 2018, her collaboration with Cardi B for the track, "Girls" landed her in even more hot water.

The song featured lyrics about being “open-minded" and "50-50" when it comes to sexuality, which many people from the LGBTQ community found to be "dangerous" and "tone-deaf."

So, many of us weren't too shocked to see the singer's name circulating online once again...

But, this time, it is surrounding a new issue entirely.

This week, Rita has been accused of "blackfishing."

I know what you're all thinking... What exactly is blackfishing?

Blackfishing is a recently-coined term used to describe someone accused of pretending to be black.

It usually happens on social media, when influencers use makeup, hair products, and in some cases, surgery to drastically change the appearance of their ethnicity.

The phenomenon emerged back in November...

When a Twitter thread calling on people to expose "all of the white girls cosplaying as black women on Instagram" went viral.

Can we start a thread and post all of the white girls cosplaying as black women on Instagram? Let’s air them out because this is ALARMING.
— Wanna (@Wanna)1541556201.0

And thousands of white women "blackfishing" themselves on Instagram were publically named and shamed for creating aesthetics and features typically associated with black women, so as dark skin and afro hair.

Critics of the trend describe it as a form of cultural appropriation...

Wherein elements of a minority culture are adopted by those in a more dominant, less discriminated culture without crediting the origin.

Swedish influencer, Emma Hallberg is one of the most-cited examples, with countless side-by-side images of the twenty-one-year-old circulating online.

And now, Rita is the latest woman to be accused of blackfishing.

The singer was born to Albanian parents and was raised in London... But she has been known to adopt black aesthetics in the past.

That some people are confused as to whether she is mixed race or not.

But she has owned up to not being black in the past...

Speaking with Wendy Williams a couple of years ago, who admitted to thinking she was mixed race, Rita said she "might as well be," but is definitely Albanian.

However, she has continued to adopt the hairstyles typically associated with minority black cultures...

Such as box braids and afros.

Well, people have had enough of it.

This Twitter user shared a series of photos of the singer with her hair in the said styles, along with a picture of her very European mother, writing: "Finding out Rita Ora isn’t black at all and both of her parents are white Albanians is so trippy. the girl's BEEN blackfishing."

And people responded by expressing their shock over Rita's true ethnicity.

However, some jumped to Rita's defense.

@slitmyclitt This is what she looked like when she was young. She's always been an ethnic Albanian girl with a tan… https://t.co/W8E0WsoxYb
— albanianranting (@albanianranting)1597010950.0

This Twitter user shared the singer's school photos, saying: "This is what she looked like when she was young. She's always been an ethnic Albanian girl with a tan and never changed her features or anything. She's always been a loud and proud Albanian. The cultural appropriation of braids is not ok but it doesn't make her black."

And others are claiming that they never thought she was black in the first place.

Though at the end of the day... Who's business is it but hers?

Rita is yet to respond to the accusations.

For more on the controversial world of blackfishing, keep scrolling to see why people think Bhad Bhabie is guilty of it too...