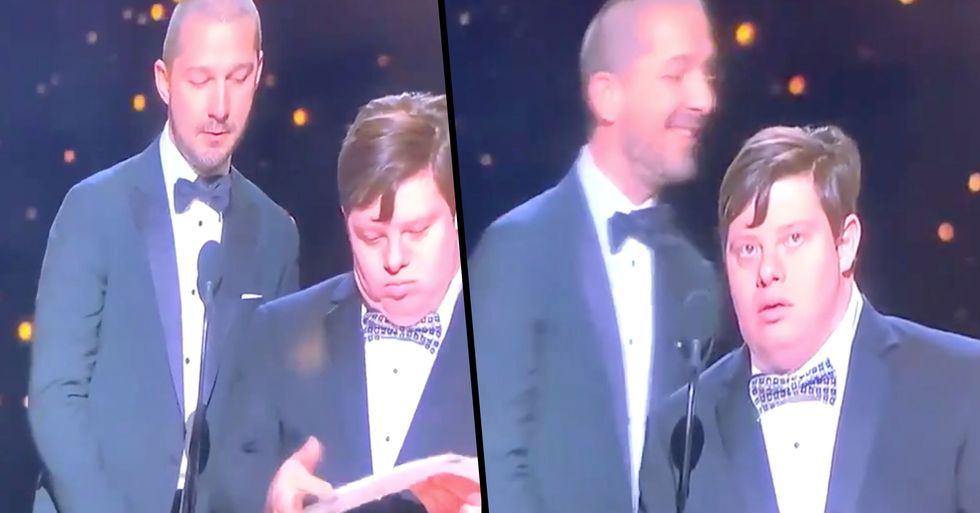 It's safe to say that the evening certainly lived up to its expectations and many worthy winners were presented with awards.

But things have taken a frostier turn after people have accused Shia LaBeouf of laughing at his co-star... who has Down's Syndrome.

And alongside the worthy winners are...

The famous hosts who present the awards.

And he presented this award with his The Peanut Butter Falcon co-star Zack Gottsagen, who has Down's Syndrome.

For those who haven't seen The Peanut Butter Falcon...

It centers around a man with Down's Syndrome (Zack) who, with the help of his friend (Shia), attempts to pursue a career as a wrestler.

All went well with the presenting...

But the internet was not happy when Shia was seen to smile when Zack stumbled on his lines.

Shia's smile caused people to question his patience with Zack...

And many interpreted it as a cruel gesture towards his co-star.

People were seriously upset with his "actions"...

But we must say that the majority of the haters online didn't even know who Zack Gottasgen was.

There are many people out there supporting the actor and defending him.

And they have stressed the fact that the pair are indeed very close, especially after working on the movie together last year.

And to prove even more than Shia has nothing but good intentions...

To all the morons trying to call out Shia LaBeouf, Shia was offered a chance to present at the Oscars but only acce… https://t.co/P8apLWbp5z
— Jared Christopher (@Jared Christopher)1581304019.0

Shia was offered the chance to present at the Oscars, but he only accepted on the condition that Zack could present alongside him.

This is a simple misunderstanding...

Everyone stop shaming #ShiaLabeouf he did absolutely nothing wrong, from some one with two brothers with special ne… https://t.co/tXLmo6fed0
— The Snapper Ω (@The Snapper Ω)1581334231.0

And Shia was only smiling while experiencing the moment of a lifetime with his friend.

But we think that Shia and Zack did an immaculate job together in presenting an Oscar Award... well done, guys!