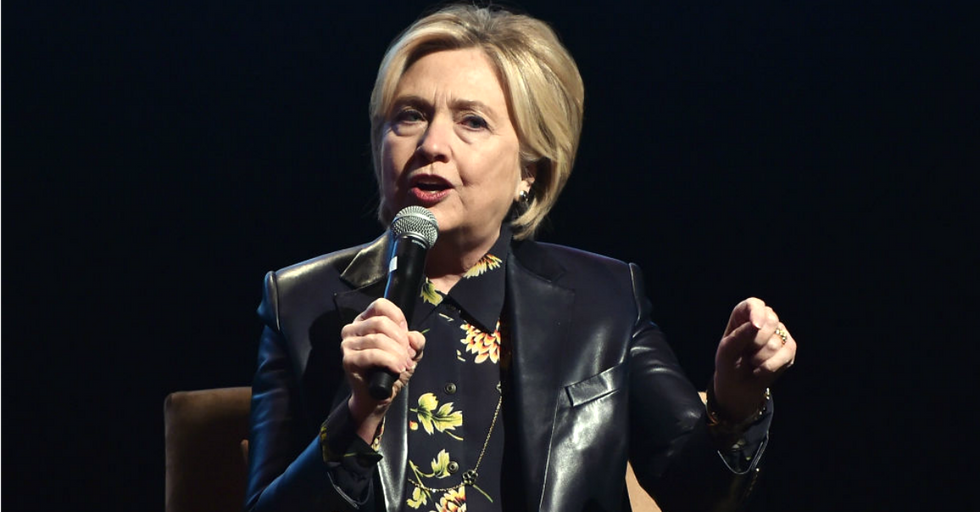 As New Year's Eve approaches, people with any sense of self-actualization whatsoever are starting to think about their year-end resolutions. As this dog turd of a year comes to an end (finally), people can't help but hope that they'll be able to do something to make the world better in 2018. The easiest way to do that is by challenging yourself to do better.

However, it appears that Vanity Fair doesn't have any interest in making the world a better place. Instead, the publication thought it'd be simply hilarious to post one of the most condescending videos we may have ever seen.

Vanity Fair made a video of 6 New Year's Resolutions that Hillary Clinton should make.

You know, because it's totally normal and not patronizing or at all presumptive to make resolutions for someone else — let alone someone who has worked in politics for literal decades. (Vanity Fair made similar videos for Gary Cohn and Sarah Huckabee Sanders, but neither of those got the same reaction as their suggestions for Clinton.)

The first resolution Vanity Fair came up with for Hillary was that she should write another book.

Specifically, a sequel to her New York Times bestseller What Happened. The nebbish champagne drinker in the video has a hilarious idea of what the title should be: What the Hell Happened? It's a hilarious joke, obviously. A real knee slapper. We can barely contain our laughter.

This woman thinks that the former U.S. Secretary of State should go hiking more often.

You know what Hillary Clinton — the woman who won more votes than any other presidential candidate in U.S. history aside from Obama — should do? According to this woman, she should take up knitting!

Oh yeah, and about that whole Richard Comey thing.

You know, that little issue of Comey releasing a letter mere days before the election that ultimately cost Hillary the presidency? Yeah, Vanity Fair thinks that Clinton needs to just get over it already. Their other resolutions include teaching a class on alternate nostril breathing and another *hilarious* joke about fixing the autocorrect on her phone. The response to Vanity Fair's completely tone deaf and tasteless video was swift and vicious...

Activist and actress Patricia Arquette does a great job of summing up our own feelings:

Just where does Vanity Fair get off giving advice to Hillary Rodham Clinton? Did they actually think they were being funny? Is there any part of their brains that considered — even for a second — that maybe Hillary Clinton has dealt with enough of this particular brand of BS? Doesn't seem like it! It seems like the edgy "comedians" of Vanity Fair wrote some "jokes" that they considered amusing and decided to slap them up on the Internet and be taken seriously. Yeah. Not so much.

Despite being incredibly condescending and just all around super gross, the Vanity Fair resolution video is also pretty darn sexist.

Whatever you think of Hillary Rodham Clinton, a woman who has dedicated her entire adult life to politics for bette… https://t.co/xNFVyg5f4u
— Summer Brennan 🌈 (@Summer Brennan 🌈)1514331446.0

Where's their video for Joe Biden, who ran for campaigned for president in both 1988 and 2008? Or how about one for Bernie Sanders? No? They're only this condescending toward Hillary Clinton and misogyny is alive and well in 2017? 'Kay. Got it.

To sum it up, people are not happy about this video.

@VanityFair How about you and your staff of self-important, presumptive, condescending, attention-deprived, tone-de… https://t.co/z9dq53UKkI
— Ceil (@Ceil)1514334722.0

And it's not hard to see why. It's in incredibly poor taste and doesn't offer anything of value to the world — which is pretty much the opposite of what a New Year's resolution is supposed to be. On Wednesday, Vanity Fair issued a statement of apology for the video, saying, "It was an attempt at humor and we regret that it missed the mark." Yeah. Ya think?

There's one person who's defending it though. Take a wild guess who.

Ah, there he is. We actually kind of love this tweet. He manages to downplay the harmful nature of the video and insult Vanity Fair in the same breath. Who's side is he on, anyway? Never mind. We don't actually even care.

Unfortunately, this kind of misogynistic treatment of Hillary is awful, but nothing new. It's become sort of boring at this point.

Good work, Vanity Fair. You really stuck it to Hillary Clinton, a woman who has already suffered one of the greatest losses of her life. Way to be. Since the editors of Vanity Fair seem to be concerned with New Year's resolutions, we thought of one for them, too: Be Nice.
20%