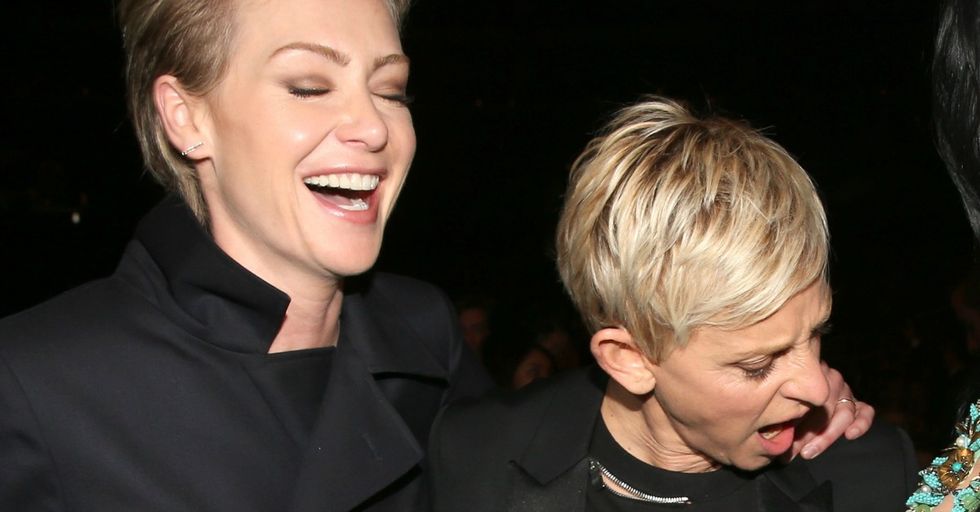 Ellen Degeneres made a joke about Katy Perry's boobs yesterday on Twitter. Not everyone thought it was funny.

With so many women coming forward with sexual assault allegations against Hollywood bigwigs like Harvey Weinstein, Ben Affleck, and James Toback, unwanted sexual attention is a hot-button issue right now in Hollywood and beyond. People are saying that the photo and joke that Ellen posted is inappropriate and skeezy.

"Happy birthday, Katy Perry!" it read, and then, "It's time to bring out the big balloons!" The second part of the tweet alludes to Katy Perry's song, "Birthday." The photo shows Ellen ogling Perry's "balloons" as Katy looks at the camera.

People were not pleased.

Erick Kunzelman replied, "WTF? Ellen Weinstein? ...totally unacceptable." The joke wasn't in good taste, and perhaps this was the wrong week for it, but let's be real... Ellen's actions weren't anywhere near Harvey Weinstein's.

Other people thought that Ellen was getting let off the hook because she is a lesbian.

Jeremy Rist replied, "How is this acceptable with everything going on in Hollywood? If it was a man he would be blasted. Oh, that's right she is lesbian." It seemed that a lot of people were more upset about the double standard in scrutinizing men and women for unwanted sexual advances than they were about Ellen's actual joke.

But other people thought that gender didn't have anything to do with it at all.

@TheEllenShow @katyperry Not appropriate, regardless of gender. I'd be offended if this tweet was about me on my birthday.
— Janet (@Janet)1508950848.0

Twitter user @Janetcwalsh1 wrote, "Not appropriate, regardless of gender. I'd be offended if this tweet was about me on my birthday."

Twitter user @RickRock1112 used an image to get his point across.

He wrote, "The way we dress doesn't mean yes," tagging #ellenweinstein, showing that when Katy Perry wore a dress with a low-cut front, she wasn't inviting people to stare down into her cleavage, even if the person staring was another woman.

Piers Morgan said it was hypocritical that Ellen was calling for more respect for women one day and then sharing this joke the next.

While Ellen's joke wasn't nearly as bad as actually groping or assaulting people as many men in positions of power have done, it didn't set a good example or precedent for how we should be regarding people's bodies. Sharing things like these as a lighthearted joke perpetrates a culture where people's bodies are objectified. That leads to people taking advantage of other people behind the scenes. The fact that people called Ellen out for this joke means that people are passionate about the issue of sexual assault and want the culture to change. But were these people who called Ellen out equally outraged about Harvey Weinstein's transgressions? What do you think? Was Ellen's tweet out of line?