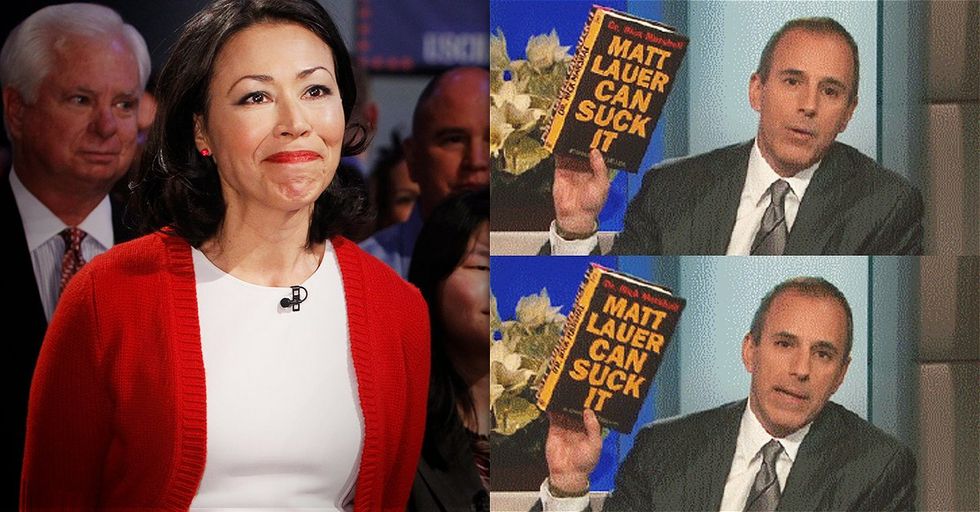 In early 2012, there was a mysterious codename floating in the halls of NBC's prized morning show, the Today show. It was called "Operation Bambi," and it had a disturbing meaning. It was a concerted effort orchestrated by longtime Today show anchor Matt Lauer to oust his then co-host Ann Curry. Lauer had named his sinister effort "Operation Bambi," because getting rid of Ann Curry, a longtime veteran reporter for NBC credited in part with giving the organization its reputation for hard-hitting journalism (interspersed with entertainment and hokey comedy beats, of course) would be tantamount to "killing Bambi."

Curry was fired in June of 2012, and her tearful departure message is still as visceral today as it was then. Many people speculated that her abrupt departure had been Lauer's doing, but NBC alleged that Curry had been fired because Today's ratings began to lag behind competitor Good Morning America.

Lauer was finally fired today, and social media is rejoicing.

For years, Matt Lauer ruled the roost at NBC.

Female co-hosts have come and gone, but Lauer remained, reportedly signing a $28 million dollar two-year contract despite whispers of his backstabbing, inappropriate and vindictive ways. In fact, when colleague Al Roker once euphemistically referred to "throw[ing] people under the bus," everyone knew who he was talking about.

Today, however, the winds have changed, and the seemingly impossible has happened.

Today co-anchor Savannah Guthrie announced live on air that Lauer had been let go due to allegations of sexual harassment, which, as she noted, seemed extremely credible. "All we can say is we are heartbroken; I’m heartbroken," Guthrie said. The New York Times noted that Today staff only learned of the news moments before going live. Guthrie continued by saying she was “heartbroken for the brave colleague who came forward to tell her story"

While this may seem shocking, NBC wasn't particularly blindsided by the news.

Several other news organizations, the New York Times included, have been working on stories about Lauer's sexual misconduct. Given the current social climate, particularly with the ever-emerging news of sexual misconduct by powerful men, it was only a matter of time before the axe would swing surely in Lauer's direction.

Besides, as previously noted, Lauer has always espoused a particularly virulent and sinister form of sexism.

Remember in 2016 when he repeatedly interrupted Hillary Clinton during a presidential forum, questioned her judgment and fitness while giving then-candidate Trump what amounted to a pass? In her memoir, What Happened, Clinton wrote, "Lauer had turned what should have been a serious discussion into a pointless ambush. What a waste of time." Indeed.

But Lauer's most vicious treatment was saved for the women who worked next to him – particularly Ann Curry, who he hated because she threatened his dominance as the reigning Today show hard-hitting journalist.

Lauer, along with other male members of the staff, cultivated an atmosphere of disdain and harassment that wore Curry down and eventually led to her firing. Brian Stelter of the New York Times described what Curry went through:

Curry felt that the boys’ club atmosphere behind the scenes at “Today" undermined her from the start, and she told friends that her final months were a form of professional torture. The growing indifference of Matt Lauer, her co-host, had hurt the most, but there was also just a general meanness on set. At one point, the executive producer, Jim Bell, commissioned a blooper reel of Curry’s worst on-air mistakes. Another time, according to a producer, Bell called staff members into his office to show a gaffe she made during a cross-talk with a local station.

Well, now, times have changed, which means people on social media are having a blast.

Well, they're saying #SomewhereAnnCurry is doing any number of things, because finally, after years, she has been vindicated.

The #SomewhereAnnCurry meme has become widespread in only a couple of hours because it speaks to a very deep part of the psyche.

2017 has been a banner year for the outing of sexual assault. The number of powerful men who have been outed as sexual predators that preyed upon the women around them for decades is staggering.

The worst thing about all the allegations is that people are finally starting to understand the structure that protected these powerful men, and how these structures ground-up and discarded countless women.

Ann Curry, for instance, was the better reporter, as compared to Matt Lauer. As the Huffington Post notes, "internal research reportedly found that when the two were onscreen together, it was Lauer who was less appealing to viewers, not Curry.
'He was looking aloof, a little bit holier-than-thou, and pompous,' a former NBC executive who viewed the research told New York Magazine." And yet she is the one that got fired.

Ann Curry is not the first woman to fall victim to the structures protecting a powerful, predatory man.

The reason the women who have come forward publicly with their stories are considered to be so brave is because they are in many ways avatars for the uncountable women whose lives were affected either directly or indirectly by the actions of these men.

There are the women who were denied job opportunities for not succumbing to advances. There are the creators whose work never saw the light of day because they didn’t play these men’s games. There are the people who left the industry disgusted and wounded by how they were treated, whose potential output and excellence was cut short. There are ambitious ones who refused to work with powerful people whom they had heard “the stories" about, or whose upward mobility was limited because they were resistant or fearful of working too close to them.

So people have more than just cause to celebrate #SomewhereAnnCurry, but even so, there's something we should remember.

Ann Curry spent decades at NBC raising the profile of NBC, and yet, she's not the face of it. She isn't the primary host of the Today show, and she isn't even the face of any other networks. People are hash tagging #SomewhereAnnCurry because she isn't currently somewhere they can see her. She's not on the news, not on air, not in the trenches or any of the other places she worked so hard to be and that's because of the sinister and misogynistic machinations of Matt Lauer and men of his ilk. While it's great we're hashtagging and (justifiably) enjoying the comeuppance of Lauer and men like him, let's not forget all the brilliant, talented, hardworking women they left in their wake.