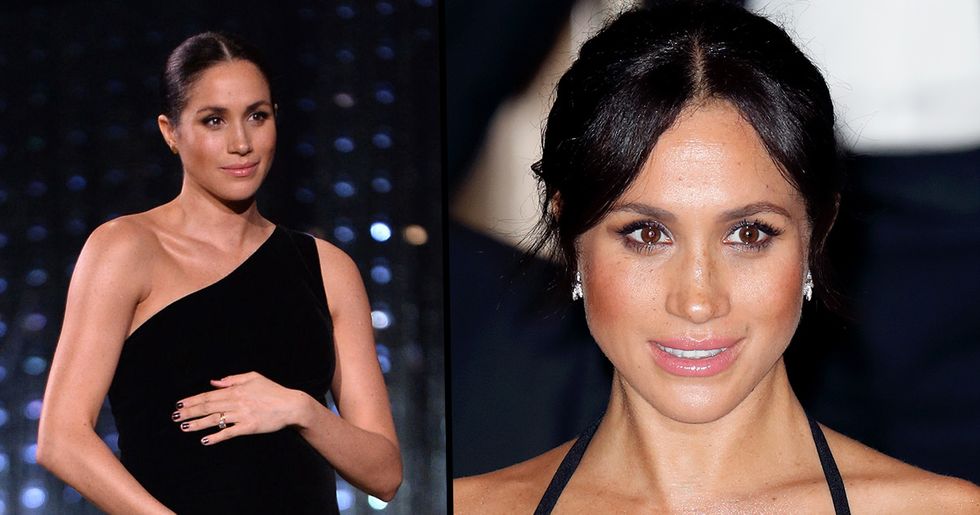 Dear Internet, why do you have to be so mad? Like all of the time. Every day it seems as if I type the words "and the Internet was pissed." Maybe that's just representative of my writing skills– but seriously –Twitter loves someone to hate. And this week, it's Duchess of Sussex, Meghan Markle.

So did she say something? Or maybe do something weird or mean of positively "un-British?" Or maybe it's what she didn't do? Like, forget to put Marmite on her morning toast? Nope. She was living her life, and people freaked out! It seems like this might've been a long time coming, but things escalated this week after her appearance at the 2018 fashion awards, where she looked perfectly fashionable. Because when does she not? Read on to find out what the heck everyone is freaking out about.

They're everyone's ideal fantasy. Royal AF, but still cute and fun. They have money but they still seem down to earth. It's perfect.

Some people sympathize with Meghan, having stepped into the spotlight in a major way.

But others are more critical, after all, she did marry into a TON of money and power.

But Meghan Markle has become the center of some online hate recently.

Which honestly sounds kind of redundant. The Internet is full of haters writing mean comments that drown out any positivity, but we all love it, so what are we gonna do?

Markle seems to be the direct target of this lately.

People going after her for not being deserved of royalty or not acting British enough (which is funny, since she's an American).

The recent attacks have mostly revolved around her pregnancy.

Ever since her pregnancy was announced in October, everyone has been obsessing over it. Because, you know,  we all love a royal baby!

Somehow the Royals still manage to stay super cool even with a baby on the way.

Like okay, they have a ton of money and probably an army of people picking out their clothes, but I wish I could look this cool every day.

Even when she's pregnant she looks great, and dare I say, properly British. Brexit folks come at me.

But some people will never be happy!

Maybe they're just looking for reasons to dislike Markle, and this week they found something to hate.

You may have noticed Markle has kind of adopted a "pregnancy pose."

Maybe you can tell what I'm talking about. All these photos share one distinct similarity.

Have you noticed what everyone is annoyed with yet?

It's glaringly obvious. Not the hair, not the dresses, not the nail polish...

Protect that baby, Markle! Am I still allowed to say Markle or do I have to say Duchess of Sussex?

Can someone please explain to me why Megan Markle meets clutching at her womb. Dear God the whole knows your pregnant #obnoxiousroyals
— It's So Holly (@It's So Holly)1544559433.0

People online will find the most arbitrary thing to focus all of their angry energy on. This person has can't even be bothered to write "bump" and it makes the tweet like 10x better.

I don't even know what this means.

#MEGXIT? Really? It should go without saying– but they're the Royals. You should and don't have any input. You come off sounding xenophobic.

What is this accusation?

Have you never seen a pregnant person? EVERYONE does this. What is she supposed to do? Put her hands on her hips and lead with her bump? Cause honestly that kinda sounds funny, if not slightly dangerous.

I honestly hope these don't get back to her, but how could they not?

Guys. She put her hand on her stomach. She's not begging for your attention, she's acting perfectly normal.

Markle isn't the only one who's had to defend herself against this same thing.

Khloé Kardashian had to tweet this out earlier this year when she was facing the same comments.

Let's look at this scientifically, shall we?

Maybe science will silence the haters. (It won't. But I'm doing it anyway.)

According to Katherine Graves, this cradling is good for your pregnancy.

Who is Katherine Graves? Wonderful question, dear reader. Graves is a birth expert who has spoken at the Royal Society of Medicine and has been interviewed on the BBC and has "written the book" on home birth. Take that as you will.

She says what Meghan does will "have a profound effect on her baby."

It brings the mother and child closer together. Who knew! "Stroking of the stomach is a relaxation method [Katherine] asks clients to practice in hypnobirthing classes" A technique Markle is reportedly looking into as her due-date approaches and one that Katherine Graves developed.

But some people have been showing their support!

Thank god Twitter is a mixed bag. After all the hate, hundreds of Markle fans flocked to the social media site to voice their support! Aww!

Some people think it's super cute.

I agree! It's super sweet.

Some people are criticizing the haters.

In the supposed era of Body Positivity, there seems to be people who have an issue with Meghan cradling her baby bu… https://t.co/N4wKCZZTeg
— Style Files (@Style Files)1544563168.0

Because it's honestly so unnecessary.

People are even dragging her other "controversies" into it.

Who knew an off-shoulder dress and a baby bump could cause such a national uproar?

Seriously! Don't you people have anything better to do?

Seems like for a lot of women, it's a natural impulse.

@NBCNews People have way too much time on their hands. I loved touching my bumps and did it often without thinking.… https://t.co/qwJd99zZlw
— Kathy Radigan (@Kathy Radigan)1544656488.0

I'm a very-not-pregnant-man and I do this after a big meal. It's natural! And fully gross in my case.

Let's hope for Markle it doesn't continue after she gives birth though.

God forbid, people will try to drive her out of Europe.

This is too accurate!

Mind your own business, internet.

So you know my opinion. What's yours?

Am I wrong? Is Meghan the bane of the crown? Does she need to be stopped? Let me know!