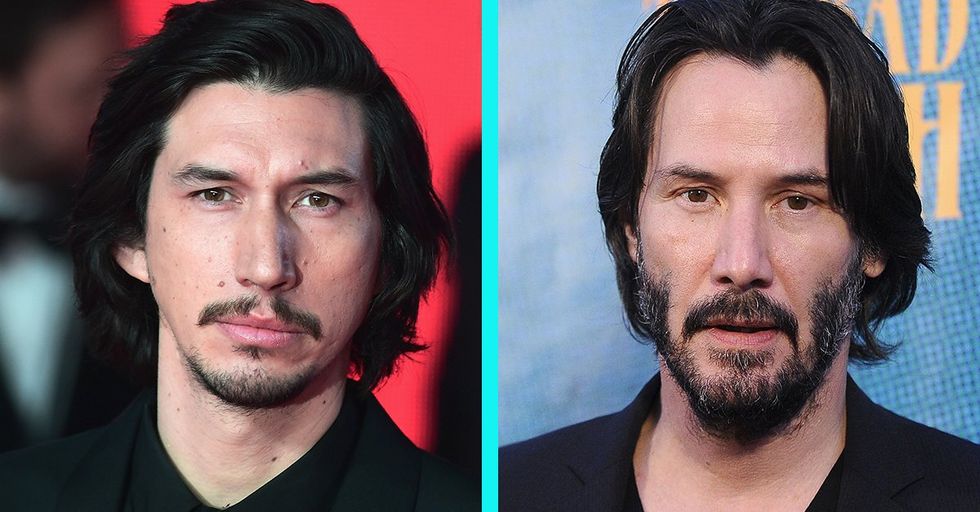 They say that everyone has a twin out there somewhere, but what happens when it turns out a famous person has a twin not exactly somewhere out there but also famous and in Hollywood? This week fans of Star Wars found out that Kylo Ren has a twin and it's been right under our noses this whole time!

Shirtless Kylo Ren has been a fan favorite from the new movie. Who knew Adam Driver looked...like that?

But one thing you may not know: Adam Driver has a celebrity doppleganger.

You may have had the thought “He looks familiar..." the first time you saw him and that’s because there’s a celebrity that basically has his exact same face.

But only because that cat is not technically a celebrity.

So who is his celeb twin? Keanu Reeves!

Screenwriter Mark Millar tweeted a photo of a faceswap between the two of them and the results are freaky! They look like the same person. Can you even tell which is which? (Hint: Driver is on the right)

People couldn’t get over the similarities!

They do look basically exactly the same? How has nobody noticed this before?

But other people thought it wasn’t really a face swap, it was more of a face mash.

Some people noticed the photos look suspiciously similar, like maybe it wasn't a true face swap.

They suspected there was some manipulation going on in the photos.

Is it the same face, though? It’s so hard to tell!

The resemblance is pretty close. But, maybe not like identical twin close, more like “Hey did you know the Olsen twins are actually fraternal" close.

Maybe we’ll never know. Or maybe we need to look at them both shirtless to really, truly know?

Strictly for research purposes, of course. We’ll see ourselves out.