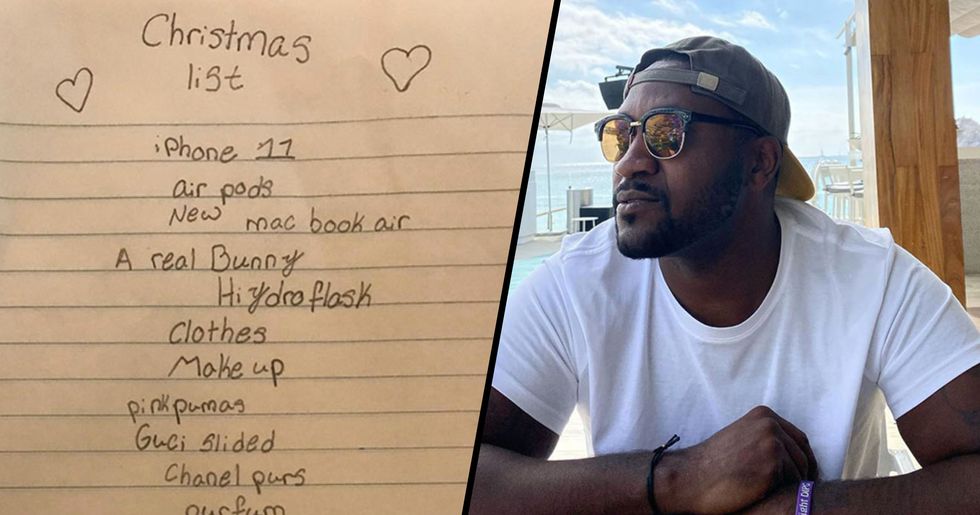 Ah, the Christmas list. Who else remembers writing down all of our wildest dreams in the hopes that maybe someone out there would listen? And hey, if you got a little overambitious in your desires, that's only to be expected, right?

But one dad has gone viral after receiving what might well be the most ridiculous Christmas list we've ever seen. The internet has gone wild for these hilarious requests, which range from the super-expensive to the downright bizarre.

The festive season is truly upon us.

And when you think about Christmas, there's a lot to love.

But for some, there's one thing which stands out.

Gifts, of course! Christmas is the time when you can both give and receive coveted presents.

And for little kids?

Well, alongside the sharing of gifts with the family, there's also the Santa factor to contend with.

And Santa adds an element of magic to the season.

Kids can literally write a wishlist to a magical present-giver, and receive whatever it is they desire.

But sometimes things get out of hand.

And one particular list has got the whole world laughing this week.

Drew Johnson is a father to 2 daughters.

And he took to social media to share the incredible list of requests his daughter has made for the festive season.

The list was over the top to say the least.

"My soon to be 10-year-old daughter clearly has a false sense of funds that we have with this Christmas list. But kudos to her for her expensive taste," he laughed.

And it quickly gained a lot of attention - with many parents finding it both hilarious and worryingly relatable.

On the one hand, there are many items that are just wildly expensive.

But along with those?

There were also some items on the list that were just downright strange.

Here's the list that got the whole internet talking.

And as you can see, it's ripe for some analysis. For one thing, it's most certainly a long read.

With this specific set of items, it does almost seem as if this kid is planning a new life.

Some of the items were super strange.

As grown-ups, we can all agree that doing laundry is one of the worst aspects of adulthood.

And these items got a lot of attention.

Not only is this spelling just adorable, but it brings up a lot of questions about what exactly this kid is planning.

Maybe the list-maker had become self-aware about her ridiculousness?

It's not as if every item on this list was totally outside of the realms of possibility.

And if she does get that bunny rabbit?

Maybe she has a long-term plan here?

Or maybe the alarm clock is to wake her up and bring her back to reality?

Although some had a rather unexpected reaction.

Maybe following this list to the letter could be an investment in his future?

But one thing is absolutely true.

We can all relate to this wishlist item, right? Want to see a dad who really did go the extra mile for his daughters? Scroll on to look inside an incredible hand-built, two-story Disney playhouse.