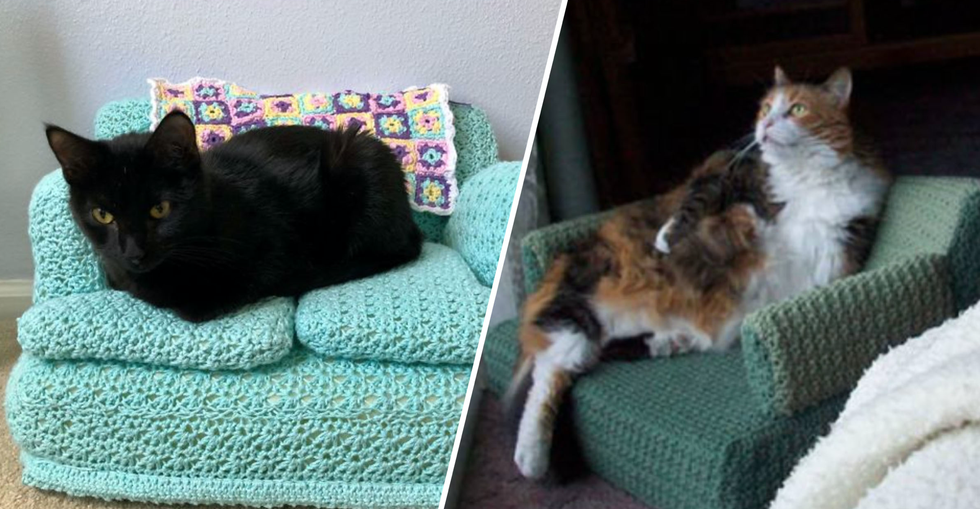 It's good to keep yourself busy and occupied in the current times.

Some people have been using this free time to learn new skills.

And for some, those skills are crocheting couches for their cats.

In the current circumstances, people are pretty bored.

You might not think there's much to do at home.

But you could use the time wisely.

By learning or practicing a skill.

You could brush up on your painting skills, for example.

Or develop your knowledge of the garden.

You could learn how to sew.

Or practise your baking skills.

Or if you really wanted to do something different.

Then you could crochet a couch for your cat. Obviously.

People have been using their free time to pamper their pets.

By creating somewhere for them to lounge.

Although crochet couches have been around for a while.

We think it's the best trend to resurface for a while.

Perhaps by the end of this, you'll want to make one for your cat.

Keep scrolling to see the cats enjoying their crocheted beds.

First up, is a plush blue couch posted to Reddit.

Reddit user Katie229141 wrote "It took 4 months but it finally happened! My cat actually sat in the sofa I crocheted for her 😊"

Next up is an Etsy seller who makes the crocheted couches.

Instagram account @wolvyncreations posted a picture of Simba enjoying his and wrote: "Cat couches don't have to just go on the floor!".

This next cat looks very comfy!

Reddit user oopoopmagoo shared a picture of their creation stating "I bit the bullet and made the kitty couch - I think she likes it".

All these cats seem pretty pleased with their couches so far.

Next is up is a little green crocheted couch.

Also posted to Reddit this user wrote "I didn't expect my cat would ever sit on my completed cat couch, but when I woke up the next morning, he had already found it!"

The sixth cat couch we've found is for Callie.

Posted on Crochetville forum this crocheter wrote "I got this pattern to make a crocheted kitty couch and my cat Callie really likes it as you can see. She relaxing and watching the birdies outside the patio door."

The next cat's owner understood that they were most comfortable on the sofa, so their cat should be too.

This Reddit user wrote, "I figured if I'm sitting at home on the couch all the time, the cats should get to do that too." He looks very content with his little spot.

It looks like this next cat took luxury to the next level.

As his couch even looks like an L shape couch.

The next couch is long enough to stretch out.

The Instagram user @my_knotty_hobby shared her creation and will even be treating her cat to some pillows as she wrote, "I skipped the skirt, but will be making some #catnip infused throw #pillows."

Next up is the tenth couch...

Which even includes a cat blanket.

Now the next cat looks a bit unsure.

Maybe Sushi will be sticking to her normal cat bed.

Nope, she's even made another crocheted couch for her cat, Soup.

The next one was made as a present.

Given to the crocheter's mom's cat, this cat must have had a good birthday!

Well, there's no missing this couch.

This bright orange one was a homemade gift for Barkley, who seems to be enjoying it.

This second to last couch is for the spoilt cat, Jigglypuff.

Her owner wrote "She gets all of the good things from her mom, and I get to crochet/knit her things like toys and...couches."

And now last of them is a pretty fancy one...

This crochet couch even has a frill on the bottom and the cat looks very happy with it.

Will lockdown have you crocheting your cat a couch?