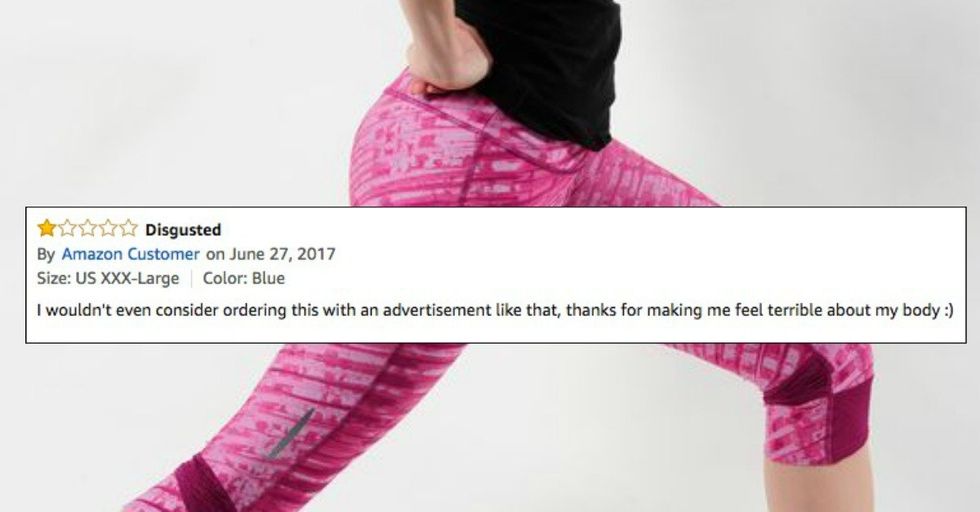 Amazon Accused of Fat Shaming with Absurd Marketing for Leggings

It's not a news flash to say that companies hire models to advertise their products. Once in awhile you'll get the "average" person in a commercial or advertisement, but most of the time it's someone who makes their product look the very best it can.

That means that no, there's not always truth in advertising, and sometimes it's down-right insulting.

Awesome news, since the average woman wears a size 14/16 and might have trouble finding leggings that fit. That's not the problem.
Buy Now

The problem is that the model used by the company is not exactly reflective of the plus-sized shopper, and quite frankly, goes so far as to insult their target customer.

Yes, that would be a thin model stuffed into one leg of the pants to demonstrate just how large the leggings run and how clearly out of touch the company is with reality.

Fitness trainer Betsy Abel was doing some online shopping on Amazon when she discovered them and shared it on Facebook.

"Here’s one for today’s ‘Are You Freaking Kidding Me’ file. Scrolling through Amazon looking at leggings… Get to the bottom and see this pair of plus size leggings… That’s fine, no shame if you need a larger size. So what the hell are they thinking using a slim model with two legs in one side??? Talk about disrespectful and being in poor taste. Like oh, hey, in case you don’t feel bad about needing a larger pair…let’s make asses of ourselves and show how two trimmer women could fit in these. Un-freaking-real!" she wrote.

“I work with women every day who fight stereotypes that go along with being plus-size and unfortunately, they are bombarded with images that make them compare themselves to cultural norms," Abel told Yahoo.

"I wouldn't even consider ordering this with an advertisement like that, thanks for making me feel terrible about my body," added yet another.

Look, there's nothing wrong with slim models, but you have to know your audience. Was this meant to "inspire" larger women to lose weight in the most insulting way possible? Was it to shame them, and if so, what the hell? Unfortunately, Amazon said they don't have the manufacturer's information, despite selling their products, so I guess we'll never know. What we do know is that they probably won't be selling many of these. As they say, money talks — and these comments speak louder than words.
20%