People Are Drinking 'Milk Coke' in the UK, and People Are Horrified | 22 Words 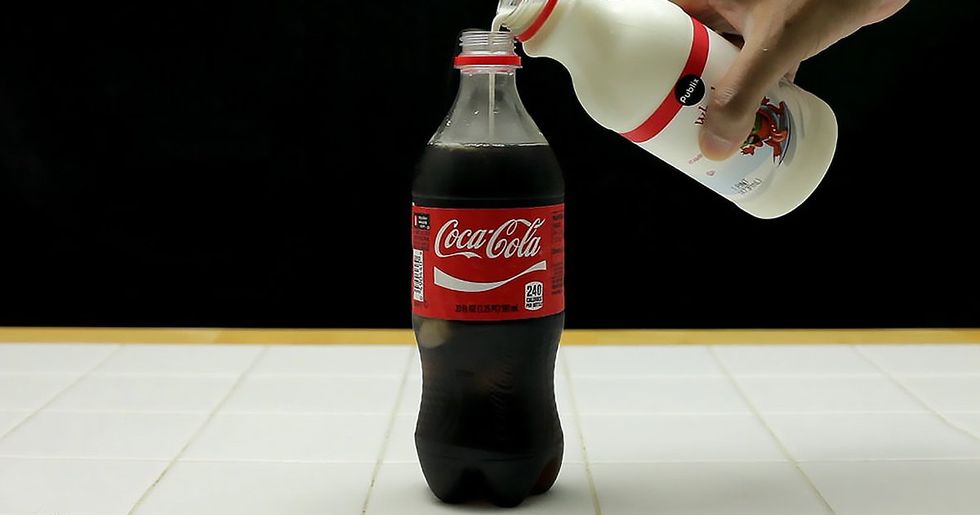 People Are Drinking 'Milk Coke' in the UK, and People Are Horrified

There are some food combinations that are generally agreed upon as being pretty delicious. Take chocolate and peanut butter for example — a sweet and salty mix so popular, it’s been named the top candy in America.

Then there are food combos are a little more niche. Figs and goat cheese? Chicken and waffles? Peanut butter and Sriracha? Sure, they might not be as popular as Reese’s peanut butter cup, but they’ve each got their own cult following of devoted foodie fans who love to experiment with unexpected pairings.

Some of the foods you’d never expect to work together can end up surprising you with their delightful blend. But some just sound like they’d give you a stomach ache. Case in point, "milk coke."

Yup, someone out there decided to test the very laws of nature with this unholy concoction of dairy and carbonation. What’s more, they actually love it. When a milk coke aficionado took to Twitter with this treat, the Internet got a collective rage stomachache.

Some foods just go together.

Combining different nutrient sources is actually essential to getting an adequate amount of the complete proteins necessary to feed your body and mind.

Ok, maybe some of our favorite food combos are more about taste than health, but these two clearly go great together.

Or a grilled cheese sandwich and tomato soup.

There's nothing better than dipping that crispy golden goodness in a cup of hot bisque.

And who could forget the classic peanut butter and jelly?

PB&J’s are like the Nick Offerman and Megan Mullally of food combos. You wouldn’t expect it to work at first, but then you realize it’s actually the most perfect thing in the world.

Oh, of course, there’s always the beloved combination of milk and coke.

Just kidding, I’ve never heard of this before and truly could have gone my whole life without the mental image of MILK mixed with COKE.

But apparently, some people love it.

What is milk coke, you ask?

Unfortunately, it is exactly what it sounds like – a nightmarish amalgam of milk and Coca Cola.

Unsurprisingly, people were not totally on board with the idea of a food combo that includes carbonated dairy.

Once the tweet went viral, the man became even more committed to defending his curious elixir.

Felton argued the drink is not unlike a melted root beer float.

Counterpoint, a root beer float is only good before it melts and turns completely disgusting afterward. But, to each their own.

People were understandably grossed out.

The idea of fizzy milk alone is enough to turn a stomach.

Some locals wanted to distance themselves from the trend.

For those outside of the UK let me reinforce that this is not normal British behaviour and James will be given the… https://t.co/JWmY6UPbNP
— norespawns (@norespawns)1551449082.0

The jury is still out on whether this is a confirmed UK trend, but it appears likely.

It sounds more like a science experiment than food.

And what exactly is the desired effect? Caffeinated energy? A satiated appetite? I have to stop I think I’m really going to be sick.

People had a lot of questions.

Never before has something so simple also been so perplexing. It’s a genuine food conundrum.

But Felton had all the answers.

Even the ones we didn’t want to hear. Honestly, his troubling replies made me wish that no one had even dared to ask.

Many believed he must be lying about his love of the notorious milk coke.

But Felton proved them wrong with a smirk of satisfied triumph, and a horrible milk coke mustache.

Some were ready to notify the authorities.

And can you blame them? I mean, someone needs to do something about this. The man clearly needs help.

Finally, Felton’s co-worker tried to put an end to the madness.

The brave woman ventured to call his bluff in their place of work, for everyone to see.

But he still didn’t back down.

Finally, he called for backup.

Felton tapped his sister for a supporting opinion on the drink, which she confirmed was a treat loved by… at least two.

Apparently, it’s all about having the right milk.

At least according to Felton’s dad, who said the beverage must be made with UHT milk or it would be totally undrinkable.

Some people were actually into it.

They agreed with the unappetizing argument that the drink resembled a melted soda float.

Others were turned to the dark side over the course of the milk coke hype cycle.

Curiosity got the best of a few lost souls, and #teammilkcoke grew stronger.

A few people have related to the Felton family tradition.

In some circles, a love of milk coke is passed down from cousin to cousin over generations.

Fans of the beverage are serious about their drink.

The #teammilkcoke crew generously provided variations on the recipe for every milk coke mood.

Some knew only of its healing powers.

There were other instances of its medicinal capabilities.

Could milk coke be… a modern medical marvel?

Felton had no patience for other soda and milk combinations.

There’s nothing like the original. Milk coke or bust, baby.

He also doesn’t care if anyone else likes it.

Though the idea that it ‘sustains’ him is a little troubling.

When all the fanfare blew over, Felton just wanted to cash in.

And can you blame him for all the free PR he drove to Coca Cola? He even offered to bring his own milk. Cool, more for him!