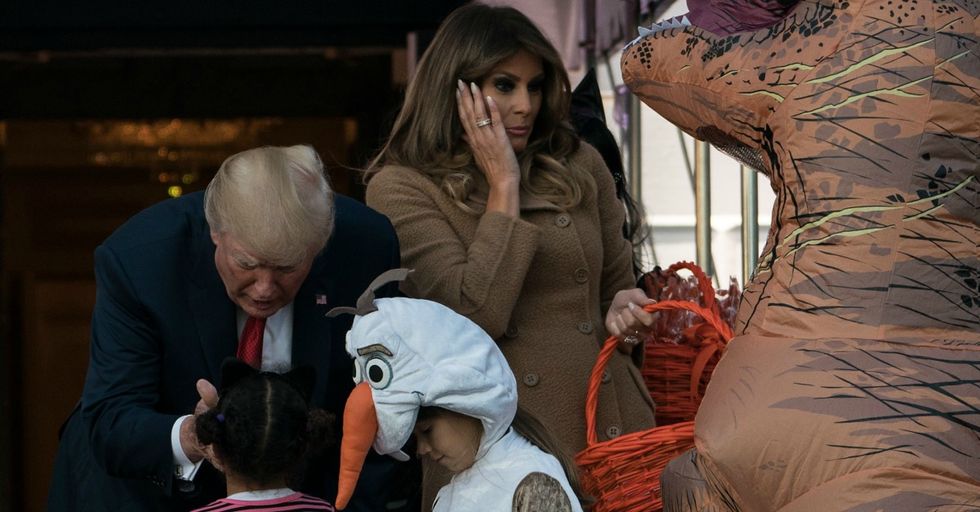 The White House hosted a Halloween Party on the South Lawn Monday. It was filled with decorations, candy, kids in costumes, and very odd interactions... for Donald Trump, that is. The President, who had already body-shamed children during another Halloween event, reverted to his awkward ways when confronted by a very strange sight.

It was a kid dressed in an inflatable T-Rex suit.

Before we go any further, let us note that Donald Trump has not had the best luck with tyrannosauruses... or anything with the name "Rex" for that matter.

His secretary of state "Rex" Tillerson, for instance, once called him a moron.

While Tillerson has never outrightly copped to the insult, tensions have been high between the nation's top diplomat and the Commander in Chief, and Trump's reactions to the racist Charlottesville protests and "on both sides" comments only served to exacerbate them.

There was also that dinosaur protest on Capitol Hill.

In August, about 100 people dressed in dinosaur costumes stampeded Washington to protest budget cuts to national service programs like AmeriCorps.

No doubt Trump still has nightmares about that fiasco, which may have explained why he reacted the way he did.

When confronted with the specter of a lumbering, ferocious dinosaur (*psst* there was a kid inside – an innocent, fresh-faced kid), First Lady Melania Trump did a very appropriate faux-shocked but interested face. Not Trump, however.

As the dinosaur stomped up to him in all its majestic reptilian glory, Trump just awkwardly buffed his coat.

That's right. No handshake, no candy, no greeting – just the Donald shuffling and looking awkwardly away from the adolescent hopeful inside the costume. Our president, ladies and gentlemen. Our president...