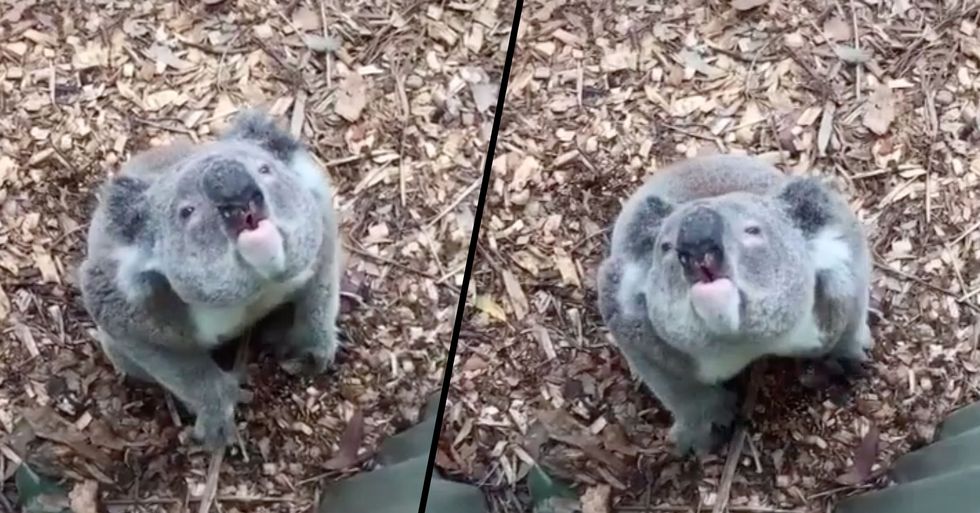 People Are Freaking out After Hearing the 'Crazy' Noise Koalas Make

People on the internet have been losing their minds after hearing the noise koalas make for the first time. It turns out that, despite how cute and cuddly the Australian animals may appear, they make the most horrifying noises.

Keep scrolling to hear it for yourself, though be warned: It may just scar you for life.

Koalas are one of Australia's most popular native animals.

The marsupials, which reside in the heights of eucalyptus trees, have become one of the most popular symbols for the country.

Especially amongst shameless tourists like us, who will queue for hours to have a quick cuddle and stroke of one of the furry creatures.

Maybe it's the fact that they resemble living, breathing teddy bears...

But there's something that's so damn cute about the furry grey creatures.

However, koalas haven't had the best start to the year.

As you are all probably aware, Australia has been completely torn apart in the last couple of months by devastating bushfires.

It's been a truly heartbreaking time.

Millions of acres of land have been burnt out by the fires, thousands of homes have been destroyed, and at least 8 people have lost their lives.

Over a billion animals, reptiles, and birds have perished in the flames.

And, out of all the suffering animals...

It's the koalas who are facing the worst fate.

Koalas are amongst the worst affected.

And tens of thousands of the marsupials are estimated to have died in the flames.

Many have been nursed back to health...

And, amid the crisis, people are rediscovering their love for the fragile creatures.

Well, most of them are.

Many people are actually feeling disturbed regarding the animals, after a video of one making a stomach-churning noise went viral - Yes, koalas actually make sound, people.

The video, which was originally shared to TikTok but quickly went viral over Twitter...

Shows a koala sat in its enclosure, looking up at the camera and pulling a rather peculiar face... Am I the only one who's never seen that expression on a koala before?

Through its oddly shaped mouth, the koala emits a noise...

And what comes out of it is completely unexpected, and a little bit terrifying.

Is it a koala or a warthog?

The noise, which is a weird grunting type of sound, is something that wouldn't be out of place in a pig stye.

Let's just say, the noise has ruined koalas for me forever.

The face alone is enough to haunt my nightmares, too.

And, since the video went viral...

People have been left completely traumatized.

Many are regretting watching the video in the first place...

With this Twitter user saying she wishes she could "unhear" some things.

And some are just sad that koalas are now ruined forever.

You can have a listen for yourself here...

Though be warned: It may ruin the cute little koalas for you forever.

And, to make the noise even worse...

Some have been insisting that this is a koala's mating call. I'm not sure how much luck this little man will have making that kind of noise...

Meanwhile, others have been distracted by something else...

everyone on ethe tl making fun of the noise koalas make but no one talking about how weird they look. they dont loo… https://t.co/1Qhd2Dbel6
— aeglans freak show (@aeglans freak show)1580289550.0

Koalas do look a little bit weird, don't they? If you haven't been put off koalas for a while, keep scrolling to read about the heartwarming koala shelter that has been set up amid the bushfire crisis... I promise you'll think they're cute again.