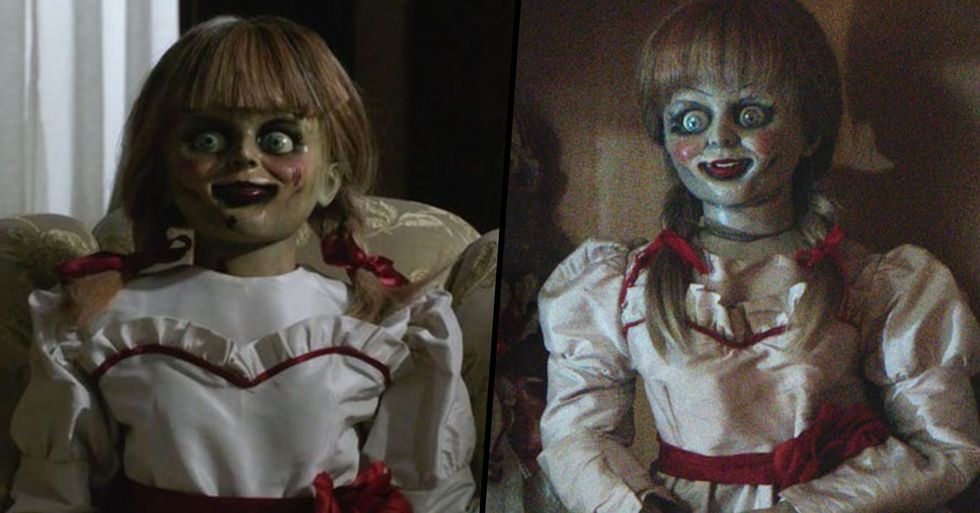 Horror fans have long enjoyed the Conjuring franchise - a truly bone-chilling haunted house movie series that keeps on giving, in terms of scares. But what makes these movies all the more terrifying? When they break that barrier into real life.

Recently, the Annabelle doll, which got its own spin-off in 2014, has gone "missing" from Occult Museum and everyone's freaking out... But now, the theory has reached a conclusion.

Whether it's true crime, legendary monsters, unsolved mysteries, or paranormal activity, there's something about creepy things that have an definite draw.

But one horror franchise has always kept on going is The Conjuring.

Alongside the Conjuring films, the franchise also includes 2014's Annabelle, 2017's Annabelle: Creation and the much-anticipated Annabelle Comes Home, which came out in June this year.

We can't even decide which is the scariest one.

Perhaps one reason for its success, is that it plays into a favorite horror film trope - that of the haunted figures.

The fact that the events of these films are all based upon true stories. The inspiration behind The Conjuring franchise, including Annabelle are experiences shared by real-life paranormal investigators.

So, when elements of the movies seep into our lives... We're left terrified.

Recently, a rumor that the Annabelle doll from the franchise has gone missing from its place in the Warren Occult Museum has everyone fearing for their lives.

For those of you that might not be aware, Annabelle is a "haunted" doll.

According to the Warrens, a student nurse was given the Victorian doll back in 1970. The doll started behaving strangely but it was all soon explained when a psychic medium told the student that the doll was inhabited by the spirit of a deceased girl named "Annabelle".

If that isn't enough to scare the life out of you...

Then I really don't know what will.

The hashtag "Annabelle" started trending on Twitter a few days ago.

This is because people were fearful that the doll had "escaped" for some sort of revenge. And from there, users started posting their thoughts about what she could be doing. Obviously, the internet being the internet, there were a few strange responses...

But I'm here to debunk that theory for you.

According to Too Fab, it's all just been one big misunderstanding, as things on the internet usually are.

This all stemmed from an interview posted by The Hollywood Reporter which featured British actress Annabelle Wallis.

She claimed she convinced Tom Cruise to let her run alongside her in The Mummy film, before changing the title of the interview to "Annabelle Escapes."

And somewhere along the line, the clip was then translated into Chinese and that's what led to the misunderstanding.

Translation across languages can be a sticky one, with many misunderstandings occurring during the process. But here's the twist... the actress Annabelle Wallis played the character Mia in Annabelle back in 2014.

So there you have it guys, don't believe everything you see trending on Twitter.

Not that you'd want to anyway. Keep scrolling to see what one of Netflix's scariest movies consists of...