People Are Freaking Out Over This Mom's Baby Bump With Twins Vs. One Baby | 22 Words 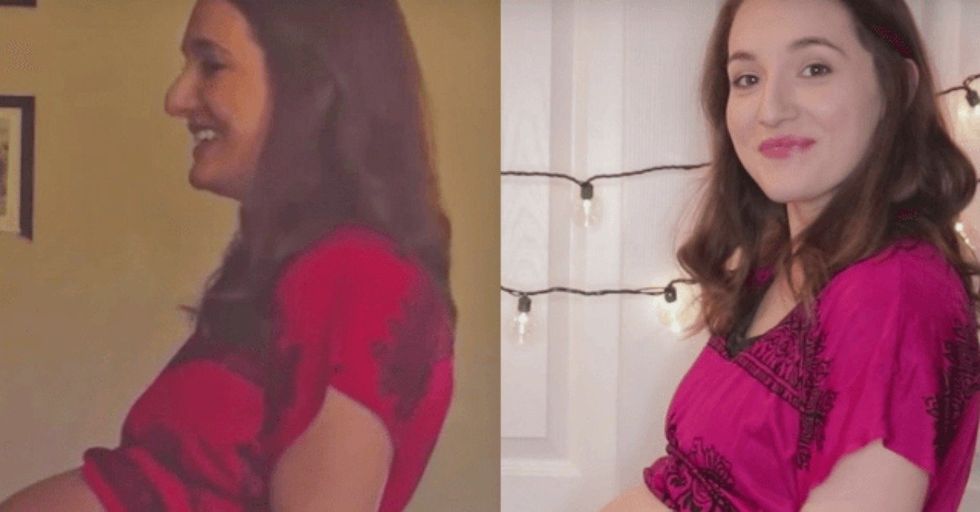 People Are Freaking Out Over This Mom's Baby Bump With Twins Vs. One Baby

Well, parents of twins can attest that it's not quite that simple when one pregnancy bears two kids.

The truth is that even before you get to the task of RAISING them, carrying twins can be quite different from carrying a single baby.

Obviously, they take up more space.

But how much more?

Perhaps if you've seen someone pregnant with twins, you may not have noticed a huge difference.

And...sometimes you can REALLY see it. Like in this photo.

But we don't often get a side-by-side view of what the same mom looks like carrying a single baby, and, later, twins.

As a vlogger, a mother of two toddler twins, and 36 weeks pregnant with a baby girl, it's safe to say Natalie Bennett is kinda, sorta busy.

But recently she still found time to create a video comparing her belly at 36 weeks in each pregnancy, you can see it below, and holy crap, people. Now I've never had children, so to me this looks insane and I want to send this woman a medal — or at least some gallons of ice cream.

Speaking to how her pregnancy was with the twins two years ago, Bennett said being pregnant with twins means lots more face time with your OB (and ultrasounds of your babies, if you’re lucky) than with a single pregnancy. Getting to and from all those appointments is exhausting, especially towards the end of your pregnancy as your belly approaches a size worthy of its own zip code.

How's that for a difference?

What's that? You're not TOO impressed? Hmm. Let's wait a minute, shall we?

"I had a huge torpedo belly sticking out like a freaking shelf," she said. "It was so heavy."

"My belly was so ridiculously large it looks inhuman," she added. "The thumbnail of it is downright shocking. People look at it and they go 'oh my gosh what am I looking at.'" But this time around with her single pregnancy, it's going a bit better because she has a stomach with skin that’s already used to being super stretched out.

“I think overall the fact that my twins pregnancy was my FIRST pregnancy really took a toll on my body," she said.

"My torso had never stretched out before, my hips had never widened, my ribs never expanded to their limit and my back had never supported that much extra weight," she added. Now carrying a single baby, Bennett says she's worn out, short of breath, dealing with caring for the twins...and still more relaxed than she was when she was carrying them.

How's THAT for a difference?

It's really something isn't it?

When the fetuses (feti?) are small, they don't take up much space. But as they grow, they're growing in twos, and the difference goes from imperceptible to...perceptible. Big time.

"One baby is so much more straightforward than a pregnancy with multiples," she explained.

My back hurts just looking at those pictures, but good luck with your little girl, Natalie!

Though it can be quite a burden, it's not particularly painful or dangerous.

It just takes the awkwardness of pregnancy and, more or less...doubles it.

So it might not be super-fun, but it's natural.

The same goes for raising them, I suppose!