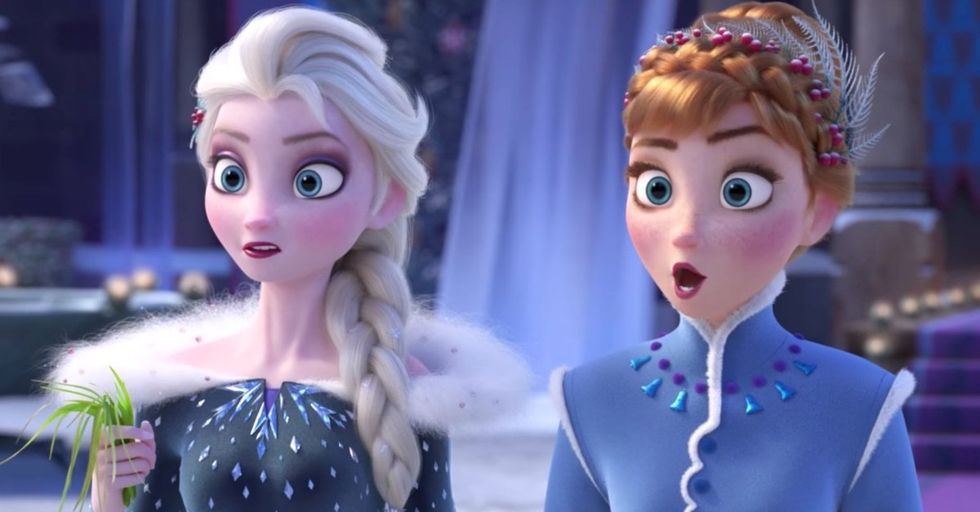 We all know that going to the movies means sitting through what feels like 30 minutes of previews before the movie even starts. These can range from great to a little entertaining to laughably horrible to FOR THE LOVE OF ALL THAT IS HOLY WHY DID THEY SHOW THAT PREVIEW TO THIS AUDIENCE? DO THEY HATE US??

Many Disney movies now also include a short film beforehand. Generally, these are 5-10 minutes and are at least somewhat charming. Unfortunately, the new Frozen short film that is played before screenings of Coco has apparently missed the "somewhat charming" benchmark. By a lot.

And people are over it.

First thing you need to know is that this "short" is long. Really freaking long.

Oh, was your kid excited to watch Coco? Sorry, they are gonna be itching it get up, pee, and run screaming before the real movie even starts. The running time of the Frozen short is 22 minutes. But honestly, it feels like 30. Time seems to stand still when you're held hostage by Olaf.

People aren't happy about having to watch this short film.

Coco is getting great reviews. It's essentially universally loved by all who see it. So being forced to watch something that is entirely NOT Coco first feels like punishment.

People are confused about why the short film is there at all.

Coco is such a great film on its own. Why did the powers that be decide that they had to tack on a mediocre Frozen short? Did they think Coco needed the boost?

Many people are left wondering if the Disney execs were worried that audiences wouldn't buy into a Mexican story.

But a great story is a great story. And a children's movie full of music, colors, strong family connections, and more than a few pulled heart-strings is going to work. Even for predominately white audiences.

If they thought the short film would be a boost, they got it really, really wrong.

People don't just have feelings about it. They have strong feelings. And they're not mincing words. We've collected some of the funniest, most biting comments on the Frozen short.

It seems that some people are experiencing PTSD.

When watching an animated short feels like a waking nightmare, the film has missed the mark. I don't think the intention was for friendly Olaf to haunt our dreams. Oh, Frozen, how far you've fallen.

When even the kids are complaining about it, you know it's bad.

When the movie Frozen came out it was so insanely popular it was a zeitgeist for the under 12 set. That was in 2013. Now, five years later Disney may have taken a giant misstep with this one, if a new generation of kids are seeing this short as their first introduction to Frozen.

The people of Twitter are not afraid to tell us how they really feel.

This short film is so unpleasant to endure, people are likening it to what death must be like. How terrible to think that the last moments we have are actually just reliving this far too long commercial pile of animated garbage!

What have we done to deserve this?

The short is so bad, and so long, and causes us to wait forever to see the movie we paid for. Surely someone is doing this to us on purpose? Is it punishment? Is it just so we all leave the theater and buy more popcorn to pass the time?

There's something racial going on here, but it's hard to put your finger on it.

It's hard to deny the issue of race with this one. What was it about Coco that made the executives think they needed to bolster it with a "sure thing" like Frozen? Hmmm, what is it about all the characters, and the setting, and the story line that makes Coco different from most other animated films coming out of American studios? The outrage over the Frozen short was so strong, that theaters, especially those in Mexico, have taken note!

Mexican audiences were so unhappy about the short, that Mexican theaters stopped showing it!

oh my god audiences in mexico hate the frozen "short" before coco so much that they literally stopped showing it
— Bobby Schroeder (@Bobby Schroeder)1511918728.0

This fact is awesome. The contracts between theaters and movie studios generally do not allow for much leeway on the theater's behalf. But Mexican theaters pulled the short anyway. Take that Olaf!

But, there are actual warning signs posted! Apparently, movie goers were so confused by the never ending short, that they thought they had gone into the wrong theater and were coming out to ask about it in droves. To preemptively allay any confusion, theater employees have posted warning signs. "You're in the right theater, there's just a crappy and long short first." (That's probably not exactly what the signs say.)

Others are coming up with survival strategies.

Want to see Coco, but also want to not suffer? Arrive late. If you arrive on time, expect a constant stream of late arrivals throughout the entire preview/short film portion.

Seriously, more than one article has been written about how to go see Coco but avoid the terrible short film.

Has a short film ever inspired such strategizing? Or so much vitriol? It's really too bad for Coco, that the horribleness of the short film proceeding it is getting so much press.

The execs at both Pixar and Disney usually have their finger on the pulse of what we want.

The 21-minute Frozen “short” before the spectacular Coco might be the worst thing Disney has put its stamp of approval on in ages.
— Brittany (@Brittany)1511506598.0

But with this they missed by a mile. They made a great film, but the publicity is being dwarfed by the distraction of the Frozen short. Hopefully they hear the audiences this time, and even if they don't pull the short, they avoid this kind of disaster in the future.