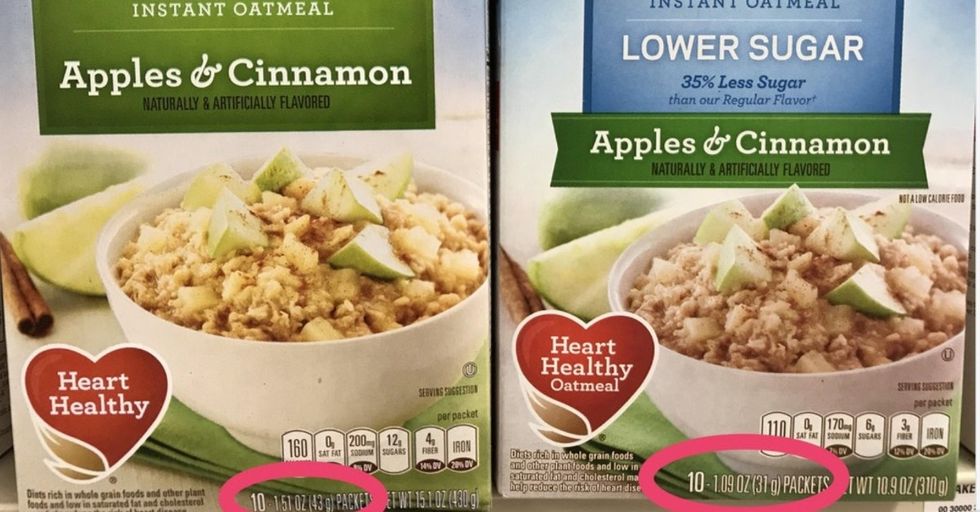 Confusing, misleading, and downright dishonest food labels are nothing new. And nutritional science is complicated, with new research about what's good for you and what's not emerging pretty much every day. The marketing execs behind our favorite brands use our best intentions and limited knowledge against us to move their products off shelves. Unfortunately, we're used to this — and we're jaded.

It all started with a simple premise, that sounded totally believable.

Look! The serving size is smaller! These oatmeal packets went from 1.51 oz to 1.09 oz. So it's basically reduced EVERYTHING, not just reduced sugar! They're trying to trick us. That's not right, Quaker. Not cool.

At first glance, it seems like a classic case of misleading marketing.

We know that these huge companies don't mind massaging nutritional facts, so it was completely believable that Quaker was selling the promise of reduced sugar simply by reducing the serving size. People were all ready to be upset.

But then some commenters took a minute to work out the math.

Taking the portion size into account, turns out there IS a reduction in sugar here. So this isn't an outright lie on Quaker's part. Instead, it's a reminder that, even when faced with something that's tempting to get angry about, it's a good idea to pause and think critically before reacting. There's a lesson in here somewhere...

Some people explained it differently.

However you understand it, it seems that Quaker isn't trying to outright deceive us. They're providing a reduced-sugar product in addition to a smaller serving size. OK, OK, maybe the world isn't built entirely on lies.

Then again, maybe the world IS built entirely on lies.

People were quick to believe that Quaker was up to nefarious marketing ploys, because we've been duped before. This chocolate sauce package says that it has added calcium AND that it has 0% calcium. So which is it? This isn't the worst offender either...

This gluten-free cookie promises to contain only one thing: gluten.

It's lying right to our faces.

If they really wanted to trick us, surely they would have placed the 100% bit a little further away from the 27% bit. There's probably some food labeling loophole that this falls into so that both statements are technically true. But do you really want to live in a world where something can simultaneously be 100% juice and 27% juice?

When marketing something as bigger, size matters.

Is this a glitch in the matrix? Is this a brain teaser devised by some evil high school math teacher? Surely it can't be Campbell's blatantly lying to us. Right? Maybe there's some fine print somewhere that explains that they're not actually talking about can size, but something altogether different and unrelated to soup or cans.

It's no wonder we have trust issues.

The world is a terrible place full of lies. Trust no one. Except maybe Quaker, because it turns out those guys were telling the truth.