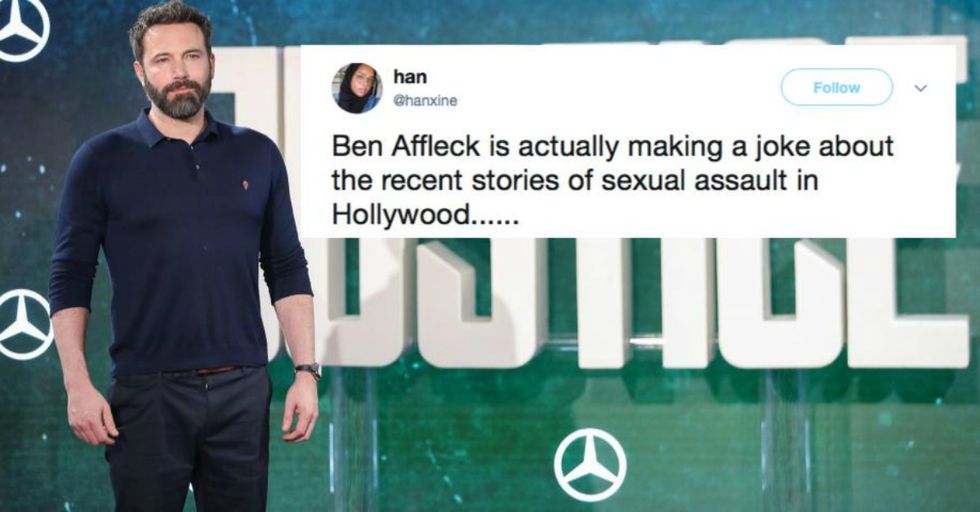 Actor Ben Affleck has led a charmed life. The actor started his career when he was a just child, starring in the educational program The Voyage of Mimi and several television specials and movies. Affleck later rose to Hollywood superstardom when he and childhood friend Matt Damon penned and acted in the Oscar-winning film Goodwill Hunting.

The actor has also had great luck in the romance department.

He dated Jennifer Lopez, remember that? Freaking JLO! Not only that, he was married to Jennifer Garner for years (this Jennifer thing might just be a trend) until he cheated on her with the nanny. Now he's dating a Saturday Night Live producer whose name, thankfully, is not Jennifer.

Since 2000's Bounce, the actor has consistently made $10 million and above, with the Batman franchise netting him $20 million per movie. After years on the Forbes top lists, Affleck is definitely not suffering in the pocket.

Which may be why he's so out of touch when it comes to current events like the Weinstein scandal.

As a refresher, Hollywood mega-producer Harvey Weinstein assaulted 57 women since the late 1970s. Affleck, who has worked with Weinstein since he produced Goodwill Hunting claimed to be shocked – shocked! – by the accusations.

Except... he already knew about them.

Rose McGowen blasted him on Twitter, reminding him that he'd said, "Goddamnit, I told him to stop doing that!" after Weinstein assaulted her.

And then, there's the matter of his brother...

Casey Affleck has had two sexual harassment lawsuits filed against him by former employees, who he flashed, called "cows," and tried to solicit sex from, only to damage their careers when they said no. And wouldn't you know he got an Oscar too – with Ben's help, of course... What a lovely guy. And then, there's the matter of Ben himself...

Affleck has been accused of groping by at least four different women. He publicly apologized to one.

Author Annemarie Tendler recalls Affleck groping her at a Golden Globes party in 2014. "He walked by me, cupped my butt and pressed his finger into my crack," she wrote. "I guess he tried to play it like he was politely moving me out of the way and oops touched my butt instead of my lower back?"

All this is to say Affleck has consistently surrounded himself and engaged with men who sexually assault, and he has done his fair share as well.

The fact that Ben Affleck has the AUDACITY to make a joke about sexual assault in Hollywood, especially given his t… https://t.co/OSNmMo89JY
— Jade Budowski (@Jade Budowski)1510759733.0

Which is why you'd think he would be the last person to make sexual assault jokes, right? So wrong..

Last week, Affleck did an interview with MTV for the Justice League press tour.

During the interview, Affleck's co-star Ray Fisher (Cyborg), was asked what would the Justice League would "get up to" if Supergirl became a part of it. Fisher diplomatically answered, “I think it would create a different dynamic."

Cool, right? Nothing to take offense with there.

Strange that Affleck should immediately pivot there, especially since he'd just mentioned how the Justice League needed women.

Then again, when the interview asked earlier which women the members of the Justice League wanted in the League, Fisher had replied, "Katana," to which Affleck had quipped, "The fishnets, right?" Sigh. Do better, Ben, do better...