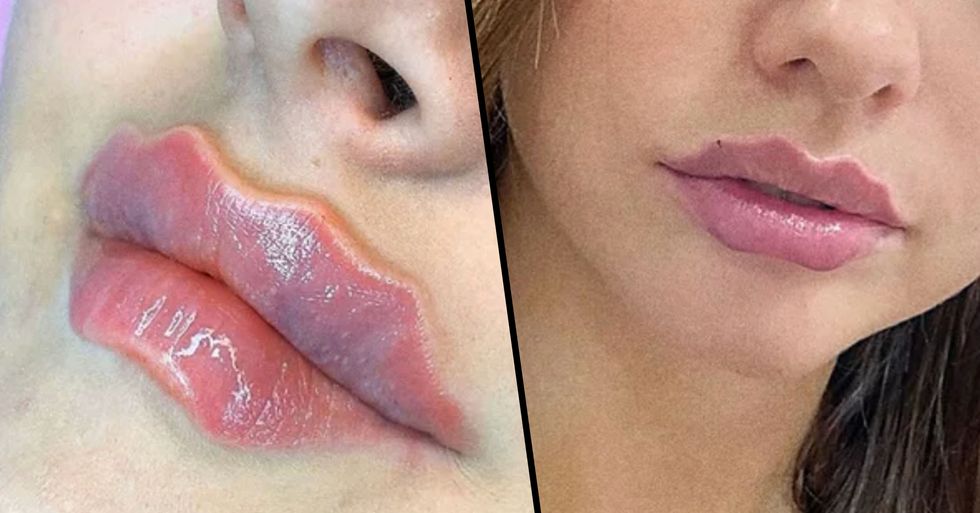 Ah, another day another viral trend doing the rounds online. It truly seems like not a day goes by without some strange beauty trend making its way into our lives. Although this one is particularly horrifying.

So-called "Devil Lips" have swept through Instagram and the pictures are utterly bizarre.

But there may be some very serious hidden dangers. Keep scrolling to find out more about this baffling trend...

Kickstarted by the one and only Kylie Jenner, Instagram became obsessed with the shade of Mac lipstick so they could recreate the star's signature look.

And it could come with potentially fatal consequences. Keep scrolling to find out more...

People can't make their minds up of it after seeing the pictures.

For the most part, people were pretty horrified.

Others shamefully admitted that they actually liked it.

Each to their own, right?

You've heard of lip fillers or overlining your lips, but this new fad, dubbed as "devil lips" sets out to achieve a "wavy" appearance.

Many believe its origin lies in Russia.

The procedure is said to involve inserting filler in the outer lip...

Sorry to break it to you, but 'devil lips', created using lip filler, are the latest bizarre trendy in beauty. It's… https://t.co/CxybKyummG
— Sunday Times Style (@Sunday Times Style)1575906241.0

Creating a wavy outer edge across the lips.

And the final look is pretty bizarre.

But it kind of looks strangely aesthetically pleasing too.

But the bizarre lip look could come with some very serious health risks...

"You can sharpen and contour by enhancing the vermillion border, but these ‘devil lips’ are unnatural,"  Dr Krystyna, cosmetic dentist and facial aesthetician, explained to Dazed.

Trying to recreate this look with filler could be fatal...

“Filler injected inappropriately could end up in a blood vessel, causing blockages and leading to necrosis (death) of the tissue. The vessels are around the lips, so using filler inappropriately is what can cause this."

Of course, many have questioned how legit these so-called "devil lips" are...

We know how prevalent the use of Photoshop or Facetune is, so it's not totally unreasonable to raise questions over whether these pictures are even real.

But there's still a danger people could try and recreate it.

I really thought this was just editing when I first saw it but I searched this up and it’s actually something you c… https://t.co/kOEbPiwthQ
— Ariana Perez (@Ariana Perez)1576941047.0

And as we already know, the consequences of this could be deadly.

It looks like someone has sussed out the mystery behind the trend once and for all...

This woman claims the trend is all down to Photoshop after using the editing technique for herself. We have to say, we aren't exactly surprised... For a list of the weirdest fashion trends, keep scrolling. Some of these are horrific...