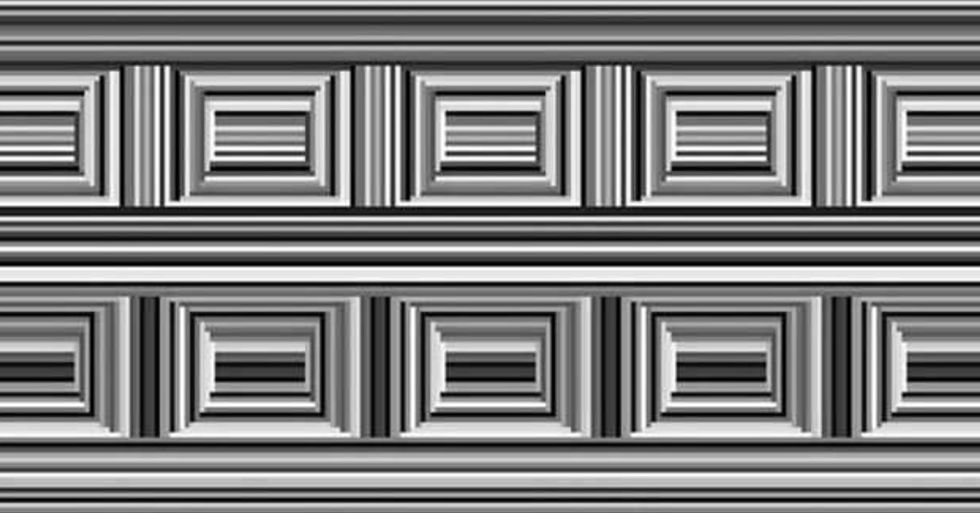 Despite sending you mad with confusion, people just can't get enough of brainteasers. There's not one person on earth who hasn't peeked at the answer before trying to figure out a puzzle...

I know the shame is eating away at you, but you can redeem yourself.

The latest one to go viral is driving everyone on Twitter absolutely crazy.

Can you solve it?

There's a whole world of puzzles out there designed to confuse and frustrate.

Here are some of the most mind-boggling brainteasers...

Can you solve them?

You'll have to shake your head to reveal the hidden image.

Can you see it? Dr. Michelle Dickinson, a nanotech engineer, posted the optical illusion on Twitter last January.

The hidden animal is a cat... and you don't have to shake your head to see it.

If you zoom out on the original illusion or look at a very small version of the image, the cat should become clear.

Although you may see a bunch of swirling circles, this image is actually completely still.

This is an example of a peripheral drift illusion, where we see still images as moving ones.

There are 12 black dots in this image, but you can't see them all at once.

Can you find the cat in this photo?

Reddit users had a hard time finding the log-colored cat, which blended in with the piles of chopped wood.

One Reddit user commented: "That took entirely too long, I thought maybe it was just a knot in that tree bark in the background."

If you focus on this image for about 30 seconds, it'll disappear completely.

This is actually a variation of a famous optical illusion called Troxler's fading circle, where the brain filters out images that seem less important.

The horizontal gray lines in this image are actually completely parallel, despite looking slanted.

This is a classic optical illusion or the "café wall illusion," dates back to the late 1800s!

Here's another example of the "café wall illusion."

This version of the classic optical illusion won second place in the Neural Correlate Society's "Best Illusion of the Year Contest" in 2017.

When you squint really hard, or the image is blurred, you can see that the lines are perfectly parallel and perpendicular to one another.

The illusion's creator, Victoria Skye, blurred the image to prove that the lines are straight.

No one seems to be able to get their head round it.

It's called the 'Coffer Illusion,' which challenges players to locate circles in this image.

The illusion was created in San Francisco, by Anthony Norcia of The Infant Vision Laboratory at Smith-Kettlewell Eye Research Institute.

It's resurfaced on Twitter, when UK based Bernie Spofforth shared it, racking up 1,600 likes.

It works because the brain tends to focus more on closed shapes, as well as its poor ability to interpret vertical and horizontal stripes. When the puzzle was first created, it was shown to 45 people, taking them an average of 45 seconds to spot the circles. Take a look at this optical illusion making a car door look like a beach... It's crazy.