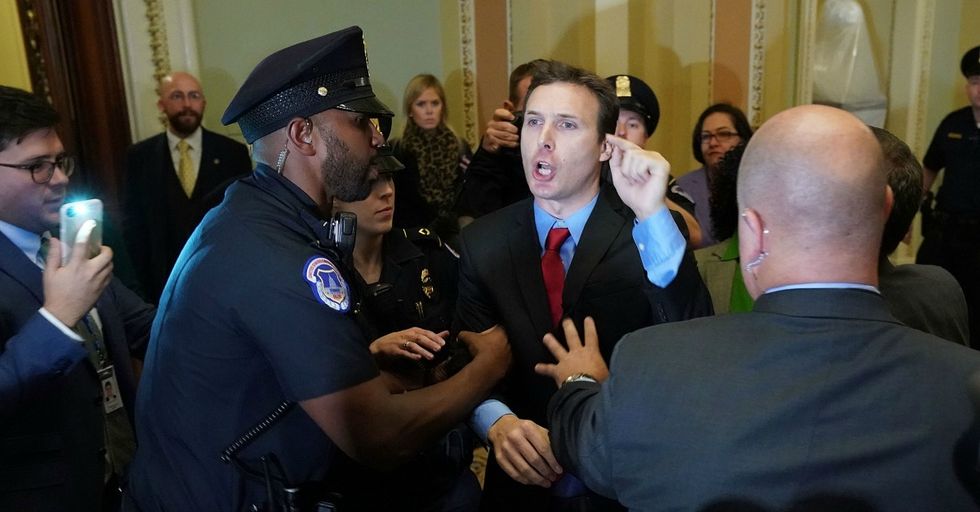 Ryan Clayton, president of Americans Take Action, a populist group geared towards "restor[ing] free and fair elections in America, creat[ing] a purpose driven economy, and sav[ing] the free and open internet," took action against President Trump this week when he threw a handful of Russian flags with the word "Trump" inscribed on them at the President as he entered a meeting with senators on Capitol Hill.

As he shouted "Trump is treason" over and over, Clayton, who had previously tried to get the president's son-in-law Jared Kushner to sign a Russian flag, was taken into custody and charged with unlawful conduct.

Very, very titillated. And users had all sorts of reactions to Clayton's protest.

One Twitter user in particular zeroed in on Trump's companion, Mitch McConnell.

The Senate Majority Leader, who has been quietly engaged in of a "political Cold War" with the president seemed frozen between amusement and horror. It seemed almost like he desperately wanted to laugh but knew he couldn't – you know, because of the optics.

Other people speculated about the surrounding decorations.

Twitter user @mikea1hill tried to articulate the thoughts of a nearby covered statue, stating, "Even the statue knows its toxic." That cover looks like it's there for the dust, but who knows...

Others took the opportunity to divert conversation back to the state of Trump's tax returns.

$200 million does seem like an awfully specific sum... However, he STILL hasn't shown them, so we can't know anything for sure.

A few others, however, had a more practical reaction.

We don't know of a Gofundme for Clayton as of yet, but we'll keep you updated if we hear anything...