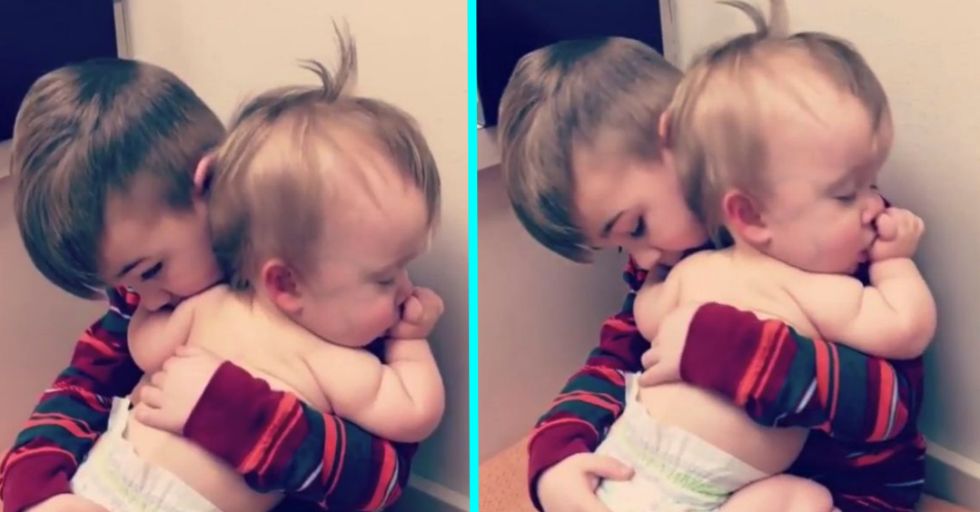 Parents on social media would love us to believe all siblings are best friends who hold hands in an overgrown wheat field with each other while the sun sets peacefully above, but the truth is sibling relationships are usually much more complicated than that. One second you're peacefully watching an agreed-upon television show quoting your favorite characters and then the next your brother is practicing pile driving you into your un-carpeted basement floor. It's just how it goes.

This video of a big brother rocking his little sister to sleep is absolutely adorable.

The sister sleeps peacefully, sucking her thumb in his arms while he rocks back and forth to soothe her. It’s basically the cutest thing ever.

Like videos of little kids with British accents, kittens trying to fit into strange containers, and baby animals wearing pajamas, this is the kind of high quality adorable content we can only get from the internet.

Thank you, internet. Without you, we’d never know that sometimes goats just fall asleep unexpectedly while running, or be able to replay over and over again a video of a porcupine loudly eating a pumpkin. This lovely sibling content is no exception to the rule of the internet once again finding the best possible thing and bringing it to our collective attention.

But of course, not everyone’s experience with their siblings is this pure.

For most of us there were a lot of moments in our childhood that probably wouldn’t make people say “awwww". More likely they’d make people say “SHE’S FINE. DON’T TELL MOM." And leave it to the people of the internet to bring up those moments in the comments of this video.

One person recounted the time their mom played a very intense game of hide and seek with their future uncle.

My mother took her baby brother to the park and hid him under a bush and left him there. It wasn’t until the police were at the house and everyone was frantic that she told them where he was....hours later.

Sometimes kids try to be helpful but the truth is that kids are usually really bad at stuff.

This person obviously thought he was helping but...

The day my brother came home from the hospital I decided he was dirty and tried to clean him with windex. Really not much has changed in the last 32 years.

And some kids are just actually tiny maniacal geniuses.

This tiny (but terrible) genius wrote:

When I was about 4, a date came by the house to pick her up. As she was leaving I started yelling, "Don't go mommy! Don't go! Mommy! Mommy! Mommy!" Sis was mortified, my mom had to reassure her date that I was in fact her sister and not her daughter. Sis leaves & mom asks why I did that? "I was just being silly." I think maybe a babysitter put me up to it, not sure how else a 4 year old would have come up with something so diabolical (and ok, a little bit awesome) for a prank.

Kids can be really creative when they want to torture their siblings.

I used to tell my brother we got him at Kmart and they wouldn't take him back because he was on clearance. I think he believed it at first, but eventually figured it out.

This person’s brother has a point, puppies are very good.

What he really wanted:

Damn, and to think when I was born, my brother was pissed because I wasn't a puppy.

This person just had very inquisitive sisters who were big on science experiments, probably.

They wrote: Yeah - my sisters were stopped in the middle of trying to plunge my hand in a toaster.

It can be very disappointing to find out your new sister isn’t the brother you specifically asked for.

This person had the audacity to be born a girl:

I was number 3 of 4 kids but the only girl. My older brothers were so disappointed I wasn’t the new brother they wanted that when my hair started to come in and I started looking more like a girl, as my mom would say, my older brothers shaved my head.