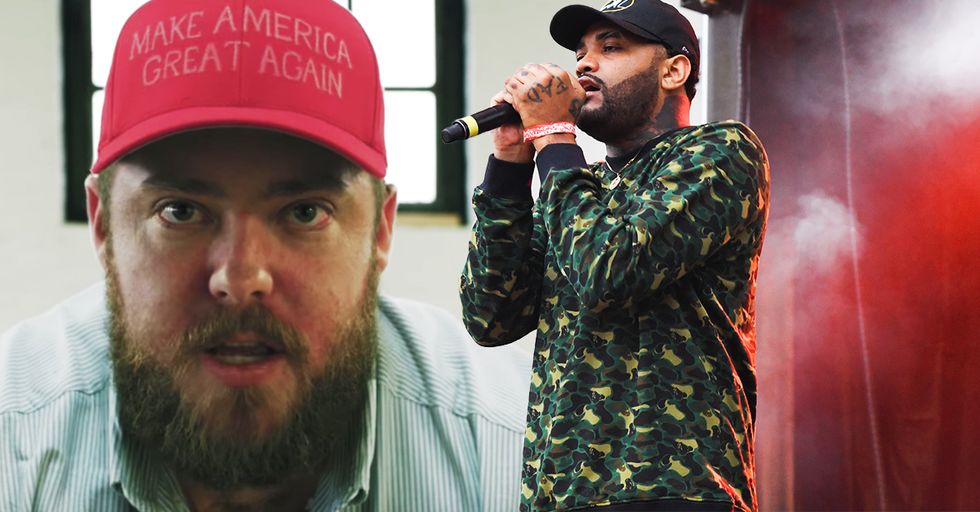 People Are Intensely Divided Over This Viral 'I'm Not Racist' Video

2016 and 2017 have been banner years for racism. Ever since the November 2016 election, which saw Donald Trump elected on his "Make America Great Again" platform (a platform many have rightly noted encourages the very worst forms of American nationalism), racists have been coming out the woodwork.

Between the resurgence of the alt right, Neo Nazis, white supremacists and the KKK, America is a much different racial and political landscape than it was just a year ago.

A large part of this can be placed very squarely at the feet of Donald Trump.

The Commander in Chief has done very little to dissuade nationalism. In fact, the closest he got to even attempting to deter white supremacists was when he was forced to make a statement in the aftermath of the Charlottesville Riots, which he did through gritted teeth and furrowed brow.

Of course, he then backtracked immediately afterwards to levy one of his most infamous statements of all time.

In reference to the violence in Charlottesville, which culminated in the death of a protestor, Trump said, "I think there is blame on both sides." By both sides, of course, he was referring to the white supremacist rioters (who he later termed "fine people") and the counter protesters who turned out to stand up against their campaign of hate.

This, of course, was only the beginning of the President's slow slide towards showing his true colors an outright Nazi sympathizer.

In the time since then, Trump has berated numerous notable people of color and has railed against immigrants and anyone he deemed not white or male enough. He has also been careful not to go after anyone who might alienate his base. When Eminem released an inflammatory rap about him, the president did not comment, but the minute LaVar Ball, father of basketball trio Lonzo, LaMelo, and LiAngelo Ball, said he was not thankful for Trump's assistance in getting his son out of jail, Trump was all over it.

A wide reserve of his particular brand of white supremacist virulence was saved for Muslims.

In November of 2017, Trump, who has repeatedly attacked muslims over the years and stoked resentments against them, retweeted a trio videos which purported to show muslims engaging in heinous acts. His source was Jayda Franson, an avowed Fascist and deputy leader of British far-right political party Britain First. Franson, who was recently found guilty of  religiously aggravated harassment after she harassed a Muslim woman wearing a hijab while she was with her four children, ecstatically tweeted "GOD BLESS YOU TRUMP!" after the President shared her videos. In the aftermath, British politicians, and indeed, the British public, condemned Trump for his actions, but Trump's supporters remained steadfast.

Then again, the other reason racism has peaked in America is because there has been a sea change in the American zeitgeist. To be more plain, White America fears it is losing ground.

It is because of this troubled racial climate that one rapper decided to stimulate conversation in the most unexpected way.

29-year old Joyner Lucas is a rapper from Worcester, Massachusetts.

Concerned by the increasingly inflammatory racial climate, Joyner filmed a new song called "I'm Not Racist" and posted it on his Youtube account on November 28. The song immediately went viral, and has garnered nearly six million views as of this article's posting.

The song begins with seemingly ordinary white man in a red "Make America Great Again" cap staring into the audience as he perfectly lip syncs a rap.

The lyrics, which are actually rapped by Joyner, are inflammatory, to say the least. "With all due respect, I don't have pity for you black n*****s, that's the way I feel/Screaming black lives matter, all the black guys rather be deadbeats than pay your bills," the song begins.

As he speaks his part, the camera pans to show that he has an audience, a young black man in dreads, who listens quietly as he unloads. Then, once his part is over, the black man stands and says his part, speaking about white privilege, oppression, attacks on President Barack Obama, black joblessness, etc.
"I wish we could trade shoes or we could change lives," both men rap, "So we could understand each other more, but that'd take time/ I'm not racist, it's like we livin' in the same buildin', but splittin' the both sides/I'm not racist, but there's two sides to every story and now you know mine."

Reception for the piece has been positive, much to Lucas's surprise. In an interview with CNN, he acknowledged, "It's a very uncomfortable conversation to have."

I've been listening to @JoynerLucas for years now. Everything he makes is incredible. All his music is about real l… https://t.co/8ghUmEnpsj
— Nasty_CSA (@Nasty_CSA)1512124086.0

Lucas further expanded why the video has resonated so quickly with so many people.

It was an average white man speaking his mind on how he actually feels about black people, and it was an average black guy talking about his interactions with white people. These are suppressed feelings that both parties have but are afraid to express.

The video is by no means perfect.

#ImNotRacist what people are missing most about this video is that its supposed to give you the message that a SIMP… https://t.co/bGEiKbpdam
— Alexanderp (@Alexanderp)1511962475.0

The verses in the black man's part lack a truly detailed understanding of the historical and socio-economic forces behind black America's continued struggles. The diligent and deliberate effort to segregate and disenfranchise the black community for one. The continued societal and governmental forces that ensure the black community remains mired in poverty. The prison-industrial complex as a legal surrogate for slavery. The way how all those black people are languishing in prison for one ounce of marijuana and yet white entrepreneurs are now thriving on the legal marijuana trade. As Damon Young of Very Smart Brothas opines:

The most obvious [problem], after watching this three times now, is that the black guy’s rebuttal is weak as fuck. The white guy spits all of the Breitbart and Bannon talking points, and the black guy cites ... Tupac? Sure, he also does mention how historical structural racism makes him feel as if he’s living in a “frying pan." But his overall rebuttal is more “Racism is why I do these bad things" and not “Actually, most of us don’t do those bad things you think we all do." He basically returned shrapnel fire with a spitball.

...The song and the video—is based on a faulty premise [that] white people’s race-related gripes and black people’s race-related gripes are .... equally justified and deserving of equal time and attention. They are not. There is no conversation that needs to happen between the races in order to create some measure of truce and racial conciliation. The only conversation that can do that is white people talking to other white people to try to find a way to be less awful to black people. (Also, saying “Hey, stop discriminating against and hating and killing us" is not asking for a truce. Just for them to stop doing what they’re doing so we can breathe.)

But it's still a good start though.