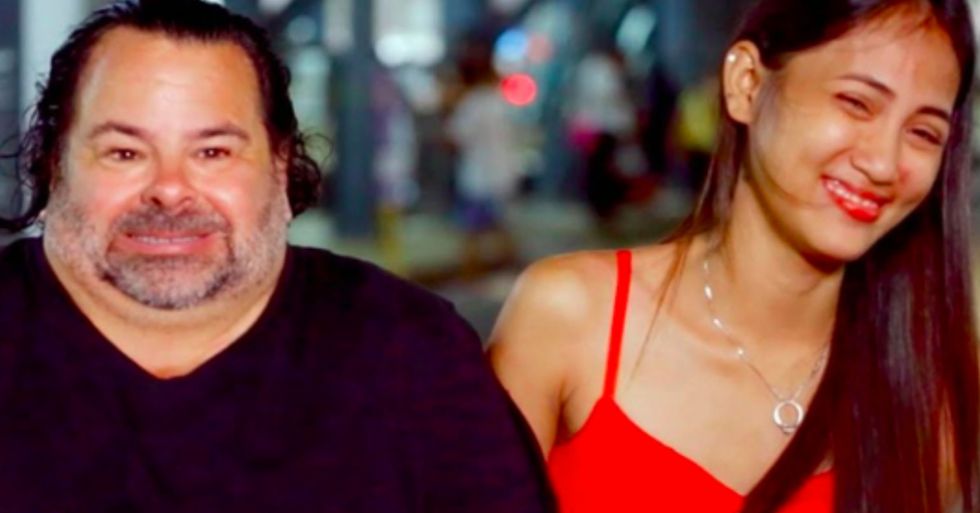 We will never look at Big Ed from 90 Day Fiancé in the same way ever again now that some amazing pictures have emerged of him looking like a model.

Keep scrolling to have a look at some incredible throwback pictures of Ed from the 80s...

We all love a good TV series binge...

Our choice of binge-able TV is now endless...

And one of the shows that falls under this category is 90 Day Fiancé.

90 Day Fiancé is a documentary/reality TV series that follows couples who have applied for or received a K-1 visa (available uniquely to foreign fiancés of U.S. citizens) and therefore have ninety days to marry each other

Yep, we are serious.

And it has just been renewed for its seventh season, meaning it has proven to be very popular.

The series currently has 6 spin-offs...

This spin-off follows couples that have met each other online, but have not yet started the K-1 visa process.

The series follows their journeys of meeting one another for the first time...

And it is always super exciting to see if they will actually hit it off in real life.

While things don't always go to plan for the couples...

It's entertaining to watch how two completely different people are thrust together to create the perfect combination of chaos and quality TV.

Does anyone remember these two?

Anfisa and Jorge took us on a ride to remember.

They taught us that you should always do a background check on your partner.

Anfisa wasn't perfect, she had slight psychopathic tendencies, at least she wasn't dealing drugs from the boot of her car like Jorge was.

But Anfisa was nowhere near as crazy as Larissa.

Oh God, where do we start with Larissa? The hot-headed Brazilian had her partner Colt wrapped around her wedding-ring finger until a domestic abuse complaint meant the two had to go their separate ways. Yikes.

On the topic of domestic abuse, Angela and Michael really took things to a whole new level.

Michael, the Nigerian bad boy kept pushing his fiancee's buttons right to the point that she smashed a cake into his face. Literally.

Who could ever forget such an iconic moment?

Even though Michael thought his apology was going to win Angela back, she taught him that cake wasn't the answer to their problems.

They say communication is the key to all relationships...

This couldn't be more apparent for this couple. Anna and her Turkish man Mursel really felt the constraints of their language barrier.

Shackled to the translating device, these two couldn't even have an argument properly. Just imagine wanting to yell at your partner but instead having a robotic voice relaying a half-assed message...

Not to mention that Anna's kids practically hated his guts...

How is their relationship ever going to last?

But strangely enough, even the normal couples couldn't make it work.

Take Johnathan and Fernanda, for instance.

It seemed like a match made in heaven, but things quickly went downhill.

After their season finished filming, the two called it quits even though they had gotten married only a few months before. Fernanda was so happy to get out of the relationship, that when she got the divorce papers, she was seen dancing around with them! Good for you, Fern, Johnathan was a jerk.

Regardless of the outcomes, the spin-off is a huge hit with audiences...

And it's easy to say that one of the newest guys, Ed, is one of the reasons why.

Ed, who is also known as Big Ed, has so far been one of the most outrageous characters on the series.

Watching Ed has been a completely cringe-filled "joy" of sorts.

Ed has a very strange relationship with his Phillipino "partner" Rose...

They met on Facebook and, even though they have a twenty-year age difference, the pair have been adamant about making things work.

Ed has repeatedly shocked viewers with his behavior on-screen...

He asked Rose to shave her legs, telling her to choose between shaving her legs or kissing him. He also forwardly asked Rose if she was clean of any STDs, which is not something you ask in the first few days.

Fans weren't impressed with his behavior...

And we must say, that is no way to treat someone you supposedly care about.

He also admitted to lying about his height online...

So yeah, Big Ed is one big whirlwind.

But now, pictures have emerged of fifty-four-year-old Ed way back in the day...

And it has left the internet completely shook.

And pictures from the 1980s have been discovered showcasing a very young and a very different Ed.

Surely this can't be the same man...?

But believe it or not, it is!

He is completely unrecognizable...

And it is easy to say that if we weren't told that this was Ed, we would never know.

Perhaps the biggest glow-down... ever?

Make sure to keep scrolling to learn about the oldest "Bachelorette" ever...