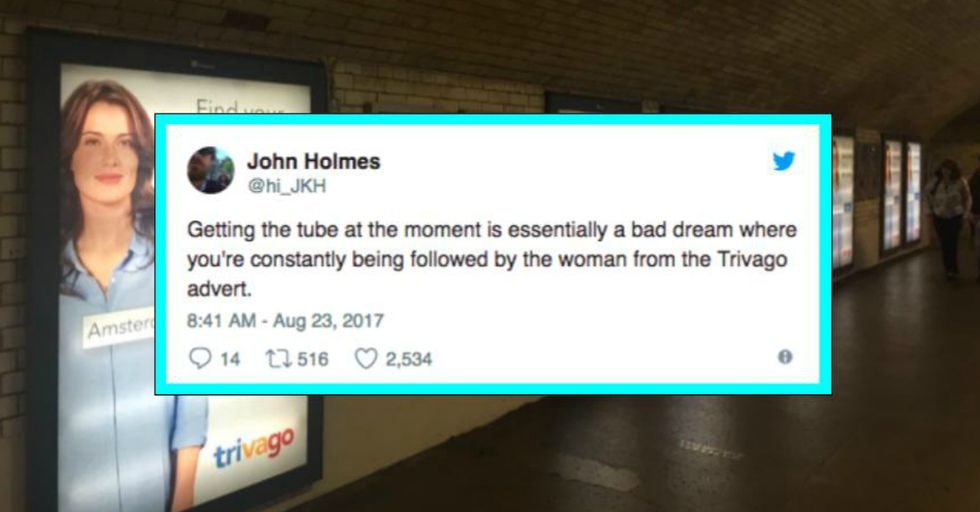 Advertisements can be annoying and, at times, even intrusive. But this bizarre tale of an ad in the London Underground has tons of people freaking out — and it's hilarious.

This is the advertisement:

Well, well. Maybe it is possible.

And maybe just a little creepy. Five pictures of the same woman staring you down at once.

Now Londoners think they're being followed by the mysterious ad woman.

Seriously, this looks like something out of a weird horror film.

There is something about the forced innocuous smile she has that just screams, "I'll murder you in cold blood."

I've never been more happy to live in the U.S.

The political side of things might be crumbling, but at least we aren't being followed by a creepy travel ad woman who might eat our souls when we have our backs turned. Take a look at this next video and tell me this is normal.

The end is nigh! Repent your sins to the Trivago woman and you shall be spared!

It is your only hope. (Or whatever. But you have to admit that it must be pretty bad if these daily riders can't even get used to her.)

This ad would be way less creepy if it just showed a picture of her destination instead.

This is the biggest plot twist since finding out Bruce Willis was dead the whole time in The Sixth Sense. (Oops, spoiler alert.)

"Everyone sees a different woman." No, no, NO. I can't handle this right now.

The Trivago woman has made her mark on England, quite literally.

She's even bigger than the Beatles. (Okay, not really, but she's around more nowadays.) It also seems she has enlisted some more help as of late.

They got a new robot to stare into our souls.

Oh, no! They're multiplying!

OK, turns out it's the same woman/robot. She just got a new shirt.

Somehow it makes it more creepy to know it's the same woman.

Based on her presence everywhere downtown, if aliens landed they might think she's our ruler.

At this rate, it won't be long until we're all hailing the Trivago woman.

She is basically the new Queen of England.

Mate, you're lucky if it's only a few weeks and not the rest of your life.

Her newfound popularity has everyone wondering: Who is our mysterious new overlord?