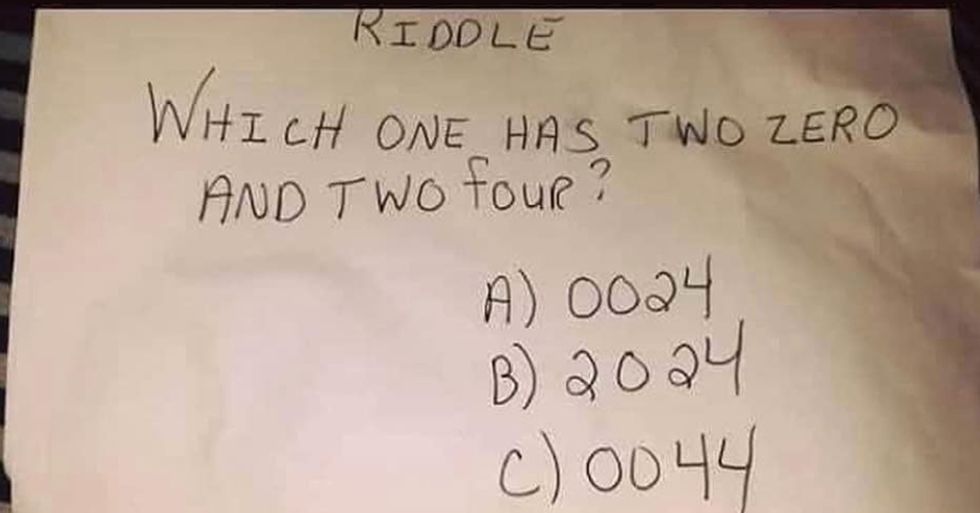 People Are Losing Their Minds Trying To Solve 'Impossible' Riddle

Riddle me that, riddle me this ... There's one riddle that's breaking the internet's brain this week.

What do you think is the right answer?

Who doesn't love a good riddle?

There's nothing better for exercising your brain.

How about a riddle no one can solve?

There's one that's been sending the internet wild this week.

And there is some good news - the answer is out there.

The problem is, no one can seem to agree on it!

It's getting everyone riled up.

Here's the riddle that everyone's talking about.

But first, let's get warmed up with some classic riddles...

A murderer is condemned to death. He has to choose between three rooms:

The first is full of raging fires; the second, assassins with loaded guns; and the third, lions who haven't eaten in years. Which room is the safest?

Those poor things would have died of starvation long before the assassin even entered that room.

What number belongs where the '?' is?

This five-letter word becomes shorter when you add two letters to it.

Can you figure out what it is?

When you need me, you throw me away. But when you're done with me, you bring me back.

What am I? And no, it's not that ex that you had a toxic relationship with.

It took me a LONG time to get this next one...

I stay in the corner but travel around the world.

This is a great riddle for mail carriers to use on their co-workers! ...I'm assuming all they do is talk about the mail and mail-related accessories all day long.

What rock group has four men that don't sing?

Try to think outside the box for this one.

They might not sing, but they sure have that stony gaze down. It makes for an epic band picture.

What was the largest island in the world before Australia was discovered?

And no, you don't have to be a geography expert to get this one.

It was still there, just wasn't discovered yet! Okay, so that was kind of a trick question...

What can you hold in your right hand...

I seriously cannot believe I missed this next one...

Two girls ate dinner together. They both ordered iced tea.

Answer: The poison was in the ice.

As she slowly drank her one drink, the melting ice released the poison.

A woman shoots her husband, then holds him underwater for five minutes.

A little while later, they both go out and enjoy a wonderful dinner together. How can this be?

Answer: She shot her husband with her camera...

...and then developed the photo.

Many have heard me, but no one has seen me, and I will not speak back until spoken to.

You got that one, right? No? Try not to beat yourself up. You'll get the next one for sure.

A window cleaner is cleaning a window on the 25th floor of a skyscraper when, suddenly, he slips and falls.

He has no safety equipment and nothing to soften his fall, and yet he is not hurt. How can this be?

Answer: He was inside cleaning the windows.

I also would have accepted 'The window cleaner was actually Spider-Man' as an answer.

Name the next number in the sequence:

I am the first on earth, and the second in heaven.

I appear twice in a week though you can only see me once in a year. What am I?

See? These are actually pretty simple! The secret is not to overthink them.

A woman was born in 1948 but only celebrated her 16th birthday quite recently.

Answer: She was born on February 29th.

AKA, Leap Day. I'm guessing she looks pretty rough for a 16-year-old...

A man is found murdered on a Sunday morning. His wife calls the police, who question the wife and the staff, and are given the following alibis:

The wife says she was sleeping. The butler was cleaning the closet. The gardener was picking vegetables. The maid was getting the mail. The cook was preparing breakfast. Immediately, the police arrest the murderer. Who did it, and how did the police know?

There is no mail on Sundays. Plus, 'getting the mail' takes about 5 seconds. Pretty flimsy excuse, don't you think?

Four men were fishing in a boat on the lake.

The boat turned over and all four men sank to the bottom of the lake. And yet, not one single man got wet. How can this be?

Answer: All of the men were married.

Get it? Not one 'single' man got wet? Talk about clever wordplay!

If it's information you seek, come and see me.

If it's pairs of letters you need, I have consecutively 3. What am I?

Bookkeepers also do your taxes. That doesn't have anything to do with this riddle, I'm just reminding you how helpful bookkeepers are. Let's move on.

We hurt without moving.

We poison without touching. We bear the truth and the lies. We are not to be judged by our size. What are we?

And now for the answer to that riddle that no one could figure out...

Here's what the internet had to say.

Well, that solves that one. Fancy another mind-bending puzzle? Scroll on...
20%