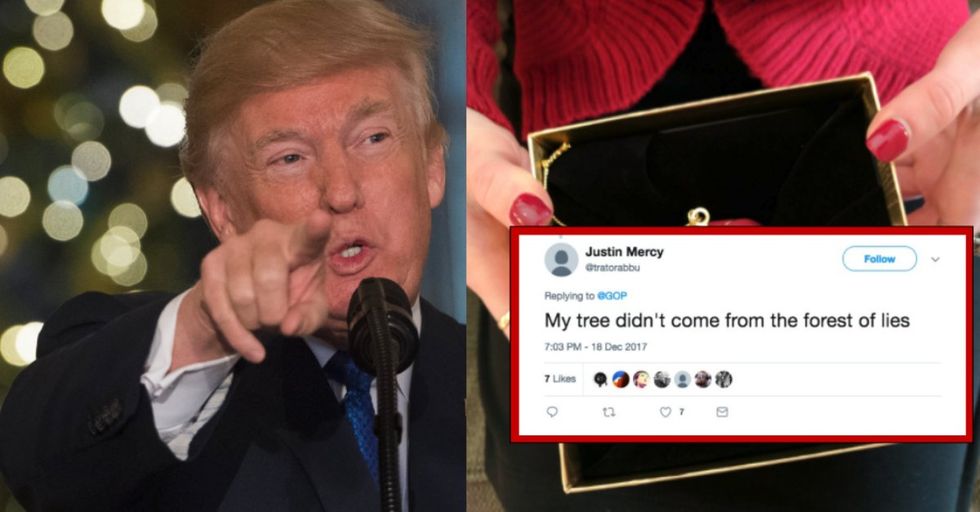 People Are Losing Their S*** Over This Trump Christmas Ornament

We're losing track of the ways in which Donald Trump has ruined Christmas, and there are still six days until the actual holiday! For a guy who's purported to be the savior of the holiday, he and his family have sure found a bunch of ways to make it terrible.

His latest gaffe includes a truly awful ornament, which is being sold by the GOP (Ghouls of Pukiness is what it stands for, we're pretty sure). The Internet did not take too kindly to this Christmas decoration, and for good reason: It celebrates Donald Trump.

Donald Trump really wants to end the "War on Christmas" that he's positive is a thing that exists.

Second, the White House Christmas decorations look like the inside of Melania's cold, sad head.

And then there was the official Christmas family photo.

Yes, the family photo that doesn't include a full one-third of the family; Barron is missing! Can the Trumps get Christmas right at all? Surely that was the last thing that could go wrong.

But no, there's more.

Earlier this month, Donald Trump made the (irresponsible, rash, inappropriate) announcement that he would recognize Jerusalem as the official capital of Israel. That announcement prompted riots in the street and caused Christmas celebrations in Nazareth to be canceled or at least curtailed a bit. Yes, that Nazareth — the Israeli Arab city in which Jesus was believed to have grown up. Trump actually caused Christmas to be canceled in Jesus' hometown.

The official White House Christmas ornament, below, was released without a hitch. It didn't seem to anger or offend anyone, so that's good.

It was designed to honor Franklin D. Roosevelt's administration, and it seems perfectly fine. Perhaps we were out of the woods when it came to things about Christmas that Trump could ruin. But alas, we were not. The GOP just released a #MAGA Christmas ornament that made people lose their s***...

The GOP announced that the ornament, a tiny, brass version of one of those infuriating red hats that says "Make America Great Again," was available for order.

It's $45.00, we assume because Trump is the 45th president and he's going to need every last penny of that ornament money to pay for his lawyers when the Russia investigation comes to a head.

There's one word that comes to mind when we look at this ornament, but we can't quite think of what it is... Ah. This is it:

"Ghastly" is a pretty catch-all term for every aspect of the Trump presidency so far, from this Christmas ornament all the way to his collusion with Russia.

Many had strong feelings about (against) this ornament, but no feelings were as strong as Denise's:

"I'd rather die and burn the tree down before I would ever put that on my tree!" she wrote. Welp, there's no question where Denise stands on Trump, and we stand with her. "I'd rather die" has sort of become a mantra for many in good ol' 2017.

It's weird, but the ornament doesn't even work on regular trees.

It only works on trees that come from the forest of lies. It's crazy, but when we tried to hang one of these MAGA ornaments on a regular tree's branch, it shriveled and died and turned into dust and blew away in the wind right before our eyes.

Here's a different idea for an ornament for your tree: