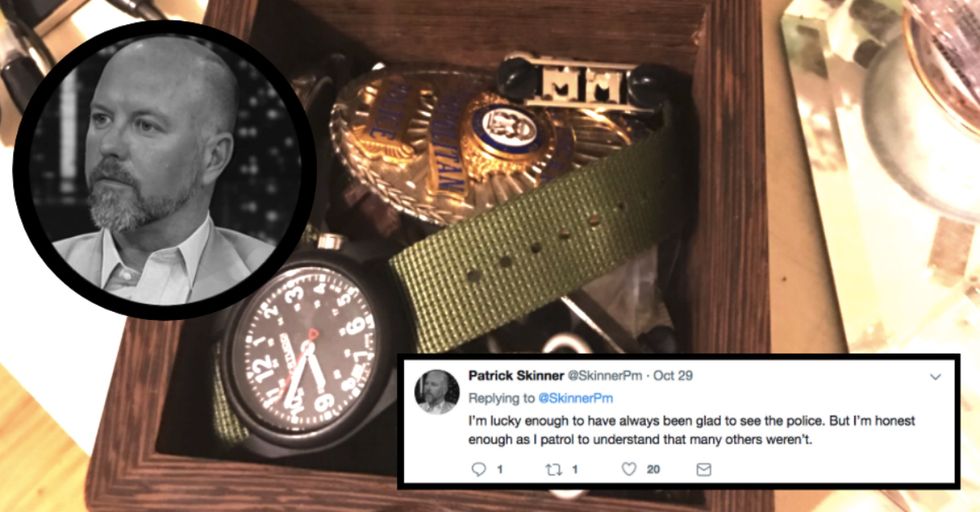 Police officers have an incredibly hard job. Their very lives are on the line every single day. The danger is real, possibly lurking around any corner. With so many stories of excessive force, police abuses of power, corruption, coverups, racism, and brutality, it's hard to remember that good cops are out there doing good work every day.

Something is missing in the stories that fill the news — humanity. Gone are the days of the neighborhood cop walking his beat, chatting with shopkeepers, neighbors, and school kids. Our police are now equipped like a military force, which makes our towns the war zone and our citizens the enemy.

But the good cops are out there. We just don't usually hear about them.

Patrick Skinner, or @SkinnerPm on Twitter, describes himself as "making my way back from federal work & overseas counterterrorism to local community policing in my hometown" in his bio.

His Twitter feed is filled with brief descriptions of his brand of community policing. It seems that he believes his role as a police officer includes assisting and protecting the people in his town. Unfortunately, this feels fresh and new.

Skinner shares his everyday encounters, usually simple and straightforward, and they paint a picture of what real community work looks like.

Patrolled 8 hours in a tough part of town & talked to tons of people. Not one of them a criminal. And I made sure they didn’t feel like one
— Patrick Skinner (@Patrick Skinner)1509106831.0

These tweets convey a community servant using his position and influence to make a positive impact. Each encounter he describes reinforces this. He's out there making his community better one person at a time. In an era when we mostly hear stories of police behaving badly, using unwarranted force, and being armed to the teeth, Skinner's stories give us hope.

On October 28, Skinner shared a story through a series of Tweets.

We often hear stories that start this way, but end with an unarmed man, or child, being shot to death. It was "nothing big," a small infraction. With the wrong mindset on the part of the cop, these small infractions turn deadly for the citizen all too often.

Per procedure, Skinner ran the plates. The small infraction just got marginally larger.

The car registration was suspended cuz of a lapse in insurance coverage. If stopped driving, that a big deal.
— Patrick Skinner (@Patrick Skinner)1509229218.0

This person's insurance had lapsed. Had a law been broken? Yes. The man shouldn't have been driving. Was Skinner's life in immediate danger because of a motor vehicle infraction? No. Did Skinner pull out his gun? No.

Rather than assuming this man was a criminal, potentially dangerous, and flagrantly breaking the law, Skinner let him know that driving would lead to problems.

So I see him walking back to the car and I stop him and literally say ‘don’t start the car. We’ve got to figure something out to avoid drama
— Patrick Skinner (@Patrick Skinner)1509229274.0

In every instance of simple traffic stop ending with the cop shooting the driver, the critical first step of calm conversation is skipped entirely. The cop sees a broken taillight, runs the plates, maybe sees another minor infraction, and pulls his gun. He is instantly in fear for his own life. Most people we all encounter in our daily lives don't want to harm us, aren't violent, and aren't criminally minded. Somehow, it seems, cops have forgotten this.

I tell him what the computer is saying & that if he drives off he’s gonna get jammed up. I ask him about his insurance (which is important)
— Patrick Skinner (@Patrick Skinner)1509229343.0

He did not accuse the guy of purposely breaking the law. He explained that his insurance had lapsed, and why that's a problem, and then asked him about it. Maybe the man had an explanation. Maybe he didn't know. Not every encounter with a cop has to be a "gotcha" situation.

He says he switched it a week or so ago. Can’t find the paperwork. We call the company and get them to confirm it but also call the state.
— Patrick Skinner (@Patrick Skinner)1509229468.0

Skinner could have had the car towed. That was completely within his rights. Instead, they made a phone call together.

Took maybe 15 minutes & saved that kid a tow, a ticket, or worse. Gun in my face is an emergency; everything else can be resolved slowly
— Patrick Skinner (@Patrick Skinner)1509229544.0

"Gun in my face is an emergency; everything else can be resolved slowly." This is the kind of perspective we all hope most cops have. Maybe they do. We don't hear the stories of good cops doing good police work often enough.

Skinner has over 9,000 Twitter followers who appreciate his style of community policing.

Hopefully there are many cops like Skinner throughout our communities. The stories that make headlines are the bad apples. But there's a culture of violence, mistrust, and "shoot firs"t that comes from the top of our police forces. New recruits are trained in this culture and it permeates every level of law enforcement. Even the good apples go bad in a toxic environment.

@SkinnerPm Also could you & your fellow officers keep sharing stories? It's helpful to understand what you do. I only see when ppl screw up.
— Lisa Wetzelberger (@Lisa Wetzelberger)1509231552.0

Skinner's Twitter feed is full of acts of kindness, of going the extra mile, of taking the time to talk to those around him. He faces his shifts with the idea that the citizens he'll encounter are good, regular people who may have problems he can help with, rather than criminals who are trying to get away with something or who are going to hurt him if given the opportunity.

Doing the hard daily work of good community policing can be a thankless job.

There are no awards for all these small interactions. Accolades, promotions, and recognition don't come from taking the time to talk to a man on a park bench, or the shop owners with the noise complaint. The good cops go out there and do their jobs every day simply because it's the right thing to do.

We are on the same side.

@CareQD I agree. The issue is the tiny fraction of bad Police can cause generational damage. We need to fix that. B… https://t.co/vEAD6eAZm4
— Patrick Skinner (@Patrick Skinner)1509233860.0

Skinner doesn't deny or make excuses for the bad cops. He doesn't get defensive or explain how hard and dangerous the job is. He acknowledges that there's a problem that needs fixing. And with his actions, day in and day out, he's out there doing his best to fix it. Great job, Officer Skinner! Let's hope that there are many more like you patrolling our communities. Thank you for sharing your stories, and keep them coming!