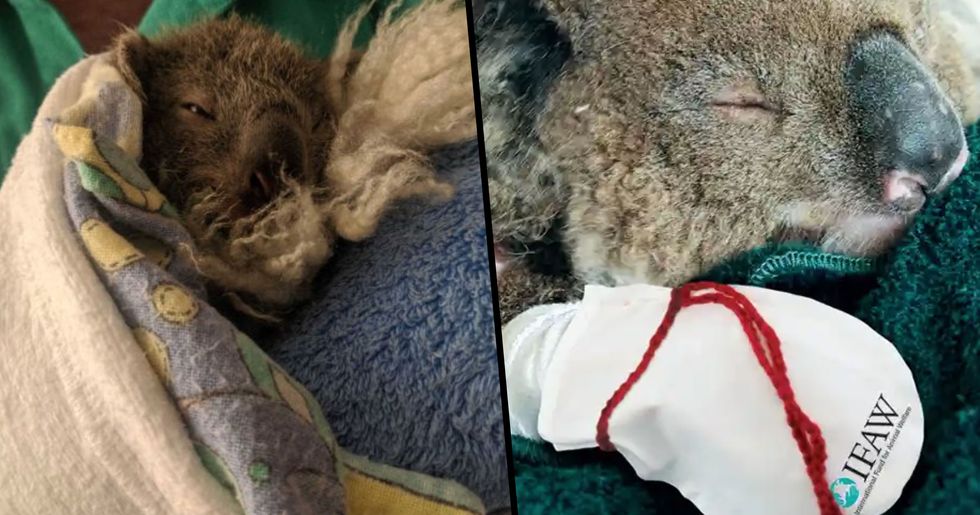 These natural fires cause devastation around the country every year, with hundreds of homes being destroyed, and hundreds of miles of forests being completely torn apart. But it's not only us humans that are affected by these fires - but it's also the wildlife too.

Just days after a video went viral of a brave woman saving a helpless koala bear, the community has been rallying together to help suffering animals, by knitting mittens.

This act of kindness truly proves there's still some good in the world. Keep scrolling to learn more...

The BBC reported that close to fifty bush fires continue to burn in populated coastal and inland regions to the city's north. Authorities say 468 homes have so far been destroyed since blazes flared up on the 8th November.

4 people have been confirmed to have died in the fires since they ignited...

As many as 350 koala bears have died, with an approximate 75% of the fireground footprint said to have encroached on prime koala habitat.

And because of these efforts, lots of dehydrated and scared animals are saved from the relentless bush fires.

One selfless woman became an internet sensation for her heroic acts this week...

Toni Doherty, a local to the New South Wales state, fearlessly ran into a bush fire at the aid of a helpless koala bear.

He was clearly very confused as to what was going on around him, and his vulnerability was very apparent.

The little koala was then seen stumbling through the burning forest...

It was truly devastating to watch, but help was soon on its way.

She then took off her t-shirt and used it to wrap up the helpless and frightened animal. She then rushes off to give the koala plenty of water.

The koala was clearly extremely dehydrated and his fur is matted from the heat...

The poor little thing could be heard wailing as Toni poured water over him and bundled him up in extra towels and blankets.

Toni proceeded to take the scorched koala, now dubbed "Lewis" to the nearby Port Macquarie Koala Hospital, a specialist facility currently treating a number of injured koalas. The hospital has now treated the Lewis’s but his health "hangs in the balance", 9News reported.

Since the clip surfaced, other locals have been rallying together to help animals scorched by the fires.

While wildlife hospitals are doing the best they can, they are struggling to meet the huge demand. They are experiencing huge influxes of helpless animals being rushed into their care. Supplies are running at an all-time low, so members of the community have now come to the rescue.

In an attempt to aid the wildlife hospitals, not-for-profit group The Rescue Collective has been supporting the hospitals.

The group has been collecting and distributing supplies from the public, to domestic rescue and wildlife hospital services throughout Australia.

But the locals have also been coming up with their own ways to help the animals.

Locals have been creating "koala mittens" for animals whose paws have been burnt in the fire, as well as little pouches for marsupials to snuggle up in.

People are doing whatever they can to help...

"We have had people knitting koala mittens for burnt pads and sewing pouches for marsupials," Nicole Blums, an organizer to the operation, explained. "People are so passionate to help the animals, they want to save our national emblems and they want to do whatever they can to help."

Sadly, Blums admits that this is only the beginning of the devastation.

"There are many areas that no-one can get into at the moment – people are finding animals on the side of the road or in the homes as they’re fleeing out of the bush. "We’re getting them the supplies they need but we do know this is the tip of the iceberg and the worse is yet to come."

As so many people were eager to offer their help, The International Fund for Animal Welfare has explained they are no longer appealing for mittens.

Though they say they are still in need of donations to help pay for the all-important medical supplies needed to help save more animals from the flames. According to Blums, more than $75,000 has gone to koala hospitals in the state so far. The Rescue Collective has also had a lot of help from over a thousand kind people who want to help the wildlife hospitals deal with the huge intake, Unilad reports.

In the face of tragedy, it's amazing what people can do when they pull together.

Our faith in humanity has been well and truly restored.