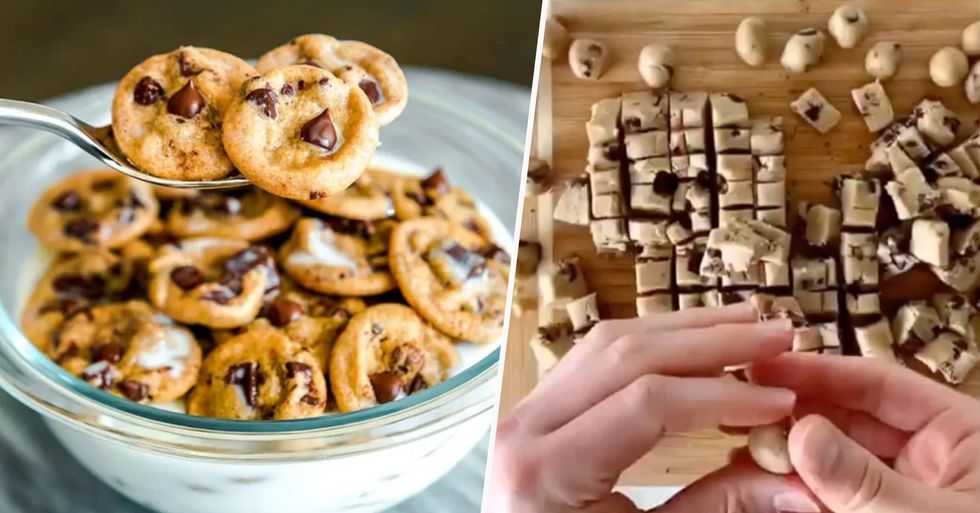 Warning: This article may just change the way you eat cookies forever.

A man has gone viral after he posted a step-by-step video demonstrating how to bake tiny chocolate-chip cookies and transform them into a delicious cereal treat.

Keep scrolling to read more about the recipe, and to learn how to make them for yourself...

While in lockdown, many of us have been getting creative in the kitchen.

With endless hours to kill and quite literally nothing else to do, the kitchen has become our solace during these dark and difficult times.

We now have all the time in the world to transform ourselves into culinary wizards.

Pizza, pasta, soups, stews... You name it, we've attempted to make it during our lockdown boredom.

Numerous fast-food favorites have been replicated, too.

While our favorite restaurants remain closed, many of us have been attempting to recreate our guilty pleasures at home - Did someone say homemade KFC?

And we are loving it.

So many of us have picked up baking as our new isolation hobbies...

Because there's nothing quite as good as a batch of homemade cookies, is there?

But now, one man has upped the game for all homemade cookies far and wide...

By creating tiny cookies that can be transformed into a cereal. Genius, I know.

Justin Schuble has opened our eyes to the wonderful world of tiny cookies.

Jason is the brains behind the popular Instagram account @dcfoodporn, where he shares an array of mouth-watering recipes, both sweet and savory.

And now, it has only gone and got a whole lot better.

Justin has dabbled with breakfast experimentation in the past...

Not too long ago, he shared his pancake cereal recipe, which involved miniature pancakes which are drizzled with butter, maple syrup, and milk.

The miniature pancakes were a roaring success...

So Justin decided to broaden his cereal horizon.

We present to you...

The chocolate-chip cookie cereal! Though it took him 2 attempts, Jason has now perfected his cookie cereal recipe, and he is ready to share it with the world.

Jason used a pack of Nestlé Toll House pre-made chocolate chip cookie dough... Though he stresses that, at home, you can make your own if you'd prefer.

He sliced the cookie-dough into thin lengthwise strips...

And then sliced them crosswise to create small squares.

He then rolled each small square of dough into a ball.

Justin stresses that the cookies need to be cut into even pieces. He wrote: "You want to make sure they bake evenly or else some will burn and others will be undercooked. Instead of rolling them into balls, just round the edges. And add an extra chocolate chip on top for a prettier final product."

The cookies are then neatly transferred onto a baking tray, and put into the oven.

They are baked for approximately 7 minutes at 350 degrees Fahrenheit. Justin notes how they may be a little bit soft upon removal from the oven, but they will gradually harden once left out to cool.

It's time to eat! To avoid getting all the cookies soggy at once, Justin recommends adding only a few bites to your bowl at a time.

Once the milk is added, the cookies are transformed into a delicious breakfast treat.

But they can also be enjoyed with ice cream as a dessert.

But it doesn't have to end here.

Justin explained that these cereals are a great opportunity to get creative. He wrote: "You can make any type of cookie into cookie cereal. It doesn’t have to be chocolate chip!"

You can watch the instructional video for yourself here.

Happy baking! For more amazing home-made treats, keep scrolling to learn how to make your own whipped espresso martini...