People Are NOT Happy About Disney's 'Moana' Costume | 22 Words 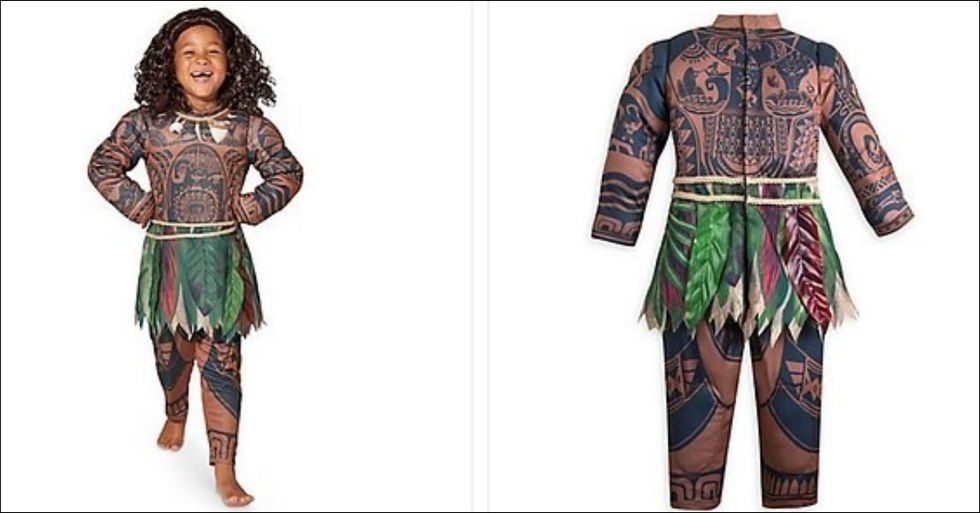 People Are NOT Happy About Disney's 'Moana' Costume

A few Halloweens ago, as kids were gearing up to trick-or-treat, Disney debuted a new costume that had people up in ARMS...

The children's costume was inspired by the character Maui — a Polynesian god voiced by Dwayne "The Rock" Johnson in the film Moana — and included an "island-style skirt" made of fabric leaves, rope necklace, and fabric brown skin with tattoos.

The zip-up costume cost about $50 — not including the matching wig (another $15).

Some called this "brown face" and many believed it teetered the line of offensive cultural appropriation.

Some expressed the sentiment that "culture is not a costume."

Tēvita O. Kaʻili, an Oceanian sociocultural anthropologist at Brigham Young University Hawaii explained this point of view further to The Huffington Post, saying, "Cultural appropriation is when a dominant group takes on the symbols, rituals and practices of another culture ― especially a less powerful minority or marginalized group ― and uses it with little understanding of those symbols or culture."

“I understand that Disney is trying to be inclusive and also trying to show that their characters are diverse," he continued, "but there’s an imbalance of power here."

“A dominant group is getting to wear and become part of a marginalized group without any sense of its history, culture or even its struggles." Without a true understanding of those struggles, “people will be able to put on the brown skin and be somebody brown without understanding the experience of someone who is brown."

Some felt like they wanted to support Polynesians who worked on the movie but still believe the costume was not OK.

Others just thought it was creepy.

Then there are those who had no issue with it at all.

It should be noted that Maui is a great hero and god in Polynesian myth, not an original character by Disney, and is seen as an important cultural figure in Hawaii.

In response to the controversy, Disney did indeed pull the costume from its shelves.

The organization told The Huffington Post, "The team behind ‘Moana’ has taken great care to respect the cultures of the Pacific Islands that inspired the film, and we regret that the Maui costume has offended some. We sincerely apologize and are pulling the costume from our website and stores." “I think it’s good for people to challenge Disney," Ka'ili said of this drama. “Disney has evolved over the years to become what they are today because of people critiquing them. It’s good that they are listening."