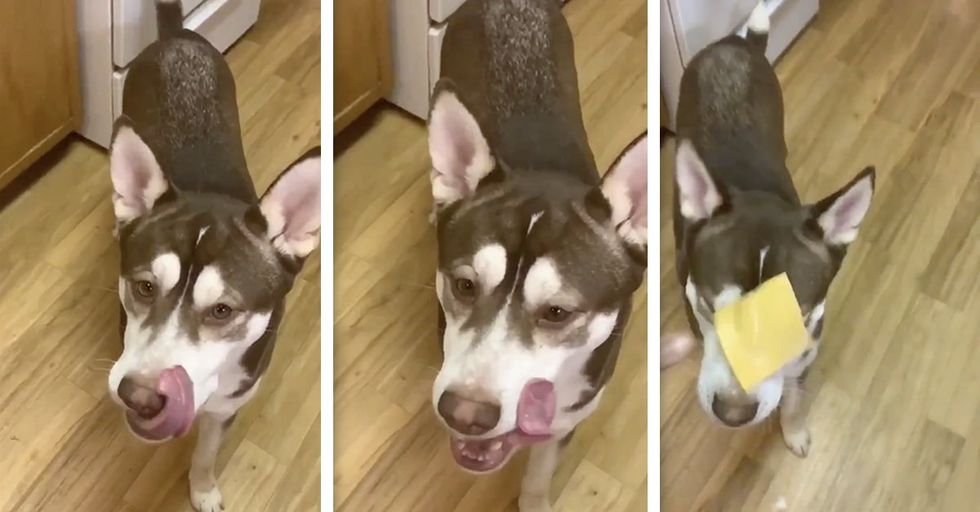 People Are Now 'Cheesing' Their Dogs and the Results Are Hilarious

There are a lot of super dumb internet memes and trends that have become popular over the last few years. There are enough weird eyebrow trends and nail art fads to make people look silly for a lifetime. Let us not forget the Harlem Shake, the ice bucket challenge (which was actually used for a good cause), and the Kylie Jenner lip challenge (which was not). We all debated The Dress whether we wanted to or not, and then we all replayed that "Yanny or Laurel" video a million times too.

There is no shortage of dumb stuff that has taken over the internet, but the latest one, the Cheese Challenge, is about to become your absolute favorite if it isn't already. What started as a weird thing to do to your baby has evolved into so much more. Yes, it involves dogs. And yes, that is exactly why I love it so much.

Cheese is a wondrous product.

I used to love cheese because it was delicious. But now I love cheese for the comedy it creates.

Soon, others caught on, started "cheesing" their own babies, and a viral internet sensation was born.

It is the perfect, harmless prank, and I love it so much. This little girl's reaction is priceless.

The hashtag #cheesed now garners thousands and thousands of results.

But it's not just babies that people are cheesing anymore. They've moved on to their dogs. And sometimes, it works better than other times...

This pup wasn't phased at all by a slice of orange American cheese hurtling toward his head. He knew it was snack time.

What a well-trained pup! She took her cheese treat right into her crate for snacking. Too cute.

Terra might have initially been caught off-guard by the cheese in the face, but he recovered quickly. I wish I could see that again in a slo-mo replay.

Um, this is precious. Seems like not every dog out there is a talented cheese athlete, and that's A-OK with me.

That pup ate that cheese so fast he didn't even realize it was gone until it was too late. I know the feeling, my dude.

Aw. This poor dog doesn't seem to get it. Open your mouth, little buddy! Let the cheese in! It tastes good!

Truly, I don't understand all these people who have slices of American cheese in their homes at all time. If I did the cheese challenge, this would have to be me.

Oh! That is not what you expect from a dog cheese challenge video. The drama! The stakes! So entertaining.

The way the cheese lands is perfect. Way too perfect, in fact. Like, is this a professional dog actor?

Blinded by the cheese

This adorable puppy is way too adorable and I can't stop watching this video. His little face! I can't.

Back of the head

The angle at which this slice of cheese lands is truly strange, a total mystery, and this poor dog just wants it off his head.

Charlie played himself with this one! He say it coming, but then it landed square on the top of his head and he couldn't see it anymore.

Poor Gus indeed! No matter how much he licked and tried to get his tongue to touch the top of his head, he could not free the cheese!

No, this is not how it was supposed to go, but the dog who the cheese was meant for doesn't seem too broken up about it.

This one is hilarious because it lasts so long. You think his friend is going to help him out, but then he's like, "I don't know what's going on, dude. You're on your own!"

This dog was not amused by their owner's antics. How dare she throw a wet square on your head?! What was she thinking?!

You can tell from the tail-wagging that this pup was really excited about the cheese challenge. And what a catch!

That poor pup! The cheese is bigger than his whole head. This is a big "No thanks!" from him.

I love this dog and his massive jowls. This slobbery mess may be too slow for the cheese challenge, but it doesn't matter. He's perfect just the way he is.

Sophie is a quick one! She almost lost the slice for a second there but made a brilliant recovery and stuck the landing.

People have now expanded from babies and dogs...to cats.

Cats are — how shall I say this? — not exactly fans of the cheese challenge, as you can see here.

They simply do not handle it well, and they end up looking ridiculous. Cats are supposed to be elegant and majestic creatures.

Yet, cats getting cheesed are some of the dumbest looking animals I have ever seen in my life. It's hilarious.

Newsflash: Rabbits sort of freak out if you throw a slice of cheese on their head. Who knew?

I don’t have a baby but I definitely have a rat for the #cheesechallenge #CheesedChallenge #rat https://t.co/wzcALwRdyj
— Brianna Bell (@Brianna Bell)1551937841.0

This rat loves the cheese challenge! Rats are cute. Share this with someone to make them laugh!