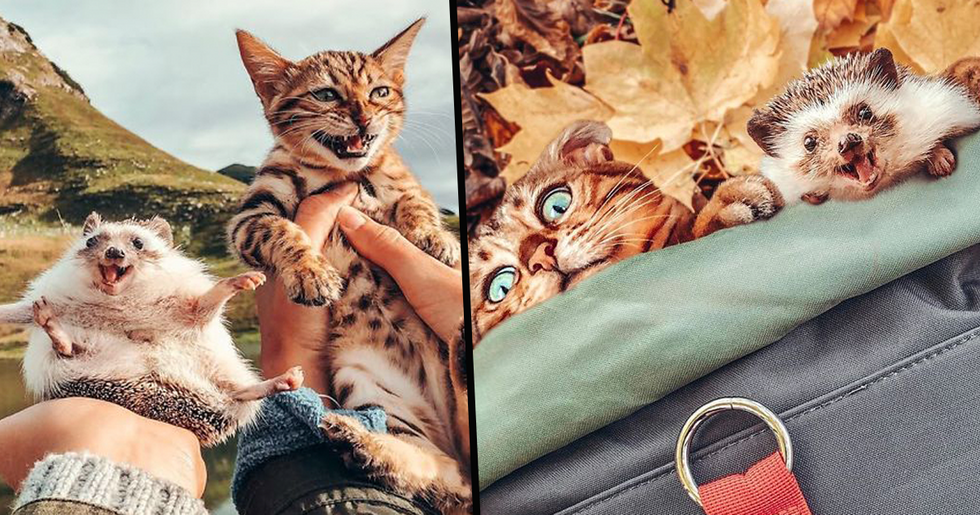 Out of all the unusual animal friendships out there, Herbee the hedgehog and Audree the Bengal kitten have to be the cutest!

Make sure to keep scrolling to have a look at their amazing life together...

There are all kinds of unusual animal friendships out there...

And if that doesn't prove that we can all get along, then what does?!

Animals are often ones to restore our faith in humanity.

Especially through their adorable friendships!

Many of these unusual friendships prove to be very popular online...

And the story of Herbee the hedgehog is perhaps the cutest yet.

As you can see, Herbee is a teeny tiny hedgehog and he lives in Germany with his human-mom, Talitha Girnus.

Of course, a hedgehog isn't the most common of pets...

But Talitha adopted him due to his previous owner being unable to care for him due to severe allergies.

Luckily for Herbee, Talitha is an experienced hedgehog owner.

She used to own another hedgehog named Pokee (which is who her Instagram account is named after) but he sadly passed away last year.

Herbee has been a huge hit on social media...

And it's easy to say that the little guy makes the perfect model!

The pair enjoy going on little adventures together...

And they always seem to pick the most Instagrammable places!

But a few months after adopting Herbee, Talitha felt that something was missing.

"It has been my dream for so many years to have a cat and Bengals get along well with other pets. I wanted a special cat that would go on adventures and travel with me, so there wasn’t much choice on the breed. And then one night I had a dream that I had a Bengal cat that I took on adventures and we became the best friends ever," she explained in an interview.

Talitha decided to act on her impulsions...

"When I woke up and realized it was only a dream, I became sad. But a few moments later I realized that this dream wasn’t something that couldn’t turn into reality. And so I started to Google. The first cat I found was Audree and I saw her and knew it," she went on to say.

Talitha felt a connection to the little kitten immediately...

"When I called the lady she told me the story and I felt like it was meant to be. Audree has 3 brothers while I have 2 brothers. They always played like crazy and she would be right there next to them being a bit shy and just watching. Just like me as a child."

Talitha said that she took Herbee with her when she went to visit Audree once before making the final decision...

"They immediately became friends! Now they’re inseparable! Wherever Herbee goes, Audree goes. She lays down on spots where he was, they sometimes even snuggle and play together. Audree is now almost one year old!"

At first, Audree was more cautious of Herbee than he was of her...

But it didn't take the pair long to get used to each other and settle in.

The pair are now best friends!

"They eat together at night, sometimes from the same bowl. Audree likes Herbee’s food better than her own even though they eat the same food (except for Herbee’s insects)," she explained. "Audree is allowed in Herbee’s cage and sleeps there sometimes or just watches him. Herbee bit Audree once and she wasn’t hurt but meowed and left—it never happened again."

They both work incredibly well together for their little photoshoots...

And we must say, they make the cutest pair!

A lot of their shoots feature some of Europe's most stunning locations...

And they sure as hell know how to work the camera.

Capturing some of Austria's most stunning landscapes...

With a big smile, of course!

Cuddles all over the world...

Did you know that cuddles boost your immune system?

Herbee has made many friends on his adventures...

Including these 2 very good boys!

One that can fit in a hedgehog and a kitten, preferably!

The dynamic duo even have their own 2020 calendar!

Now, this is something that is certainly going in our shopping baskets... even if its 4 months late! You can shop for the whole range of Mr. Pokee merchandise here.

Way too many hedgehogs are killed on roads every year and Talitha wants people to be driving carefully during the dark evenings when wild hedgehogs roam around freely.

It isn't every day you see a hedgehog and a kitten hiking together now, is it?

But for these 2, this is every day!

"Amazing people from all over the world are inspired to follow our adventures especially because they love our message," Talitha wrote on her webpage. "Between all the serious things happening in the world every day, Pokee and now also Herbee and Audree are here to give you a reason to be happy and smile. Whenever you return to our page, we want to remind you to never lose faith and always follow your heart."

It's hard not to smile at pictures like this...

Just look at them!

But in recent times...

Talitha has been struggling to take Herbee and Audree out and about.

Thanks to global lockdowns, Talitha can no longer travel.

"Of course, we can go on walks and take spring photos, but we are in the middle of nowhere staying on a family farm at the moment and it’s only just starting to bloom outside," she explained. "Of course, we can’t travel, but I think it also has a good side. It makes me appreciate going on adventures with them even more!"

The quarantine has taken them all back to their roots...

They are now spending a lot more time with their family and this has helped them appreciate the little things in life. "Like a ladybug sitting on Audree’s head or Herbee smelling a little flower," she pointed out.

Well, we can't imagine anything better than spending our quarantine with these 2 cuties!

For more adorable stories, keep scrolling to check out the hidden camera footage of a cat and a baby having the cutest conversation...