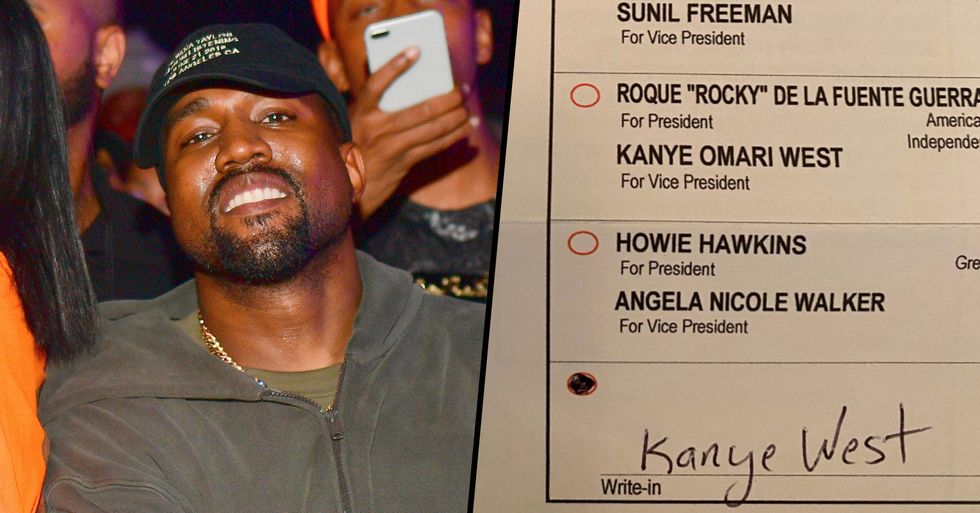 People Are Officially Voting For Kanye West to be President

Does this mean that Kanye now has a good chance of becoming the next president of the United States?

The ongoing presidential debates have been nothing short of a disaster, to say the least...

And people haven't been impressed by what they've been seeing between President Donald Trump and his rival, Joe Biden.

It's a rather hopeless situation...

And many are feeling extremely torn over who to vote for in November.

Notorious rapper Kanye West has been dragged back into the equation!

We all remember Kanye's alarming antics during his presidential campaign earlier this year...

But it seems that the rapper now stands a chance as people are officially voting for him to become the next president of the United States.

Now, where do we begin when it comes to Kanye's behavior?

Kanye West has never been afraid of letting his opinion be known and, throughout the years, he has been in and out of the headlines for his strange and eye-opening antics.

But this is a heartbreaking explanation for these particular behaviors...

Because last year, Kanye opened up about his battles with mental illness. He revealed that, in 2014, he was diagnosed with Bipolar Disorder, 2 years before he suffered his highly-publicized nervous breakdown in 2016, which was likely triggered by the anniversary of his mother's death.

Because on July 4th of this year, he suddenly revealed that he would be running for president.

And in July, he hosted his first-ever campaign rally.

However, his first campaign proved to be an extremely chaotic and alarming experience.

Kanye, who was clad in a bullet-proof vest with the numbers "2020" shaved into his head, threw his rally in Charleston, South Carolina, where he seemed to whip up various policy decisions right there on the spot... including humiliating his wife and family in the process!

He firstly disclosed how he and Kim had discussed the possibility of abortion when she found out she was pregnant with North...

And she posted a lengthy Instagram story explaining how difficult it is to live with bipolar disorder and how she will do anything to protect her husband and her children.

It was an understandably terrible time for Kanye and his family...

So his supporters weren't surprised when he stepped down from his campaign and took some time to reconcile with his family.

Kanye's presidential campaign was gradually brushed under the carpet...

And it was replaced with the firey face-off between President Trump and Joe Biden.

But now, there's been a shift in mood.

It turns out that people are that sick of Trump and Biden's arguing that Kanye's campaign has been reignited... and he's back in the running for being president!

Okay, so Kanye is actually running as a vice-presidential candidate for the American Independent Party...

But the rapper took to Twitter to share a photo of a ballot card with his name scrawled under the write-in section, along with the caption: "Friends writing me in."

Many are happy for Kanye and they are inspired by his achievements...

But it's safe to say that the vast majority aren't impressed with Kanye's presidential run...

@kanyewest @KimKardashian Please take his phone away and give this mofo some crayons and construction paper or something!!
— Tracey Mack (@Tracey Mack)1602340262.0

@kanyewest Congrats kanye! You've convinced other idiots to waste a vote on you instead of voting for someone who m… https://t.co/tEEiozlzdo
— Dylan Greco (@Dylan Greco)1602299184.0

@kanyewest You could have used your platform to get Trump out of office instead you let your pride and illness deci… https://t.co/XWsAMU1NZM
— Felicia (@Felicia)1602290796.0

Do you think he'll actually get the chance to be the next president of the United States? Or do you think this is just yet another one of his little games? Keep on reading for the latest in the presidential debates...