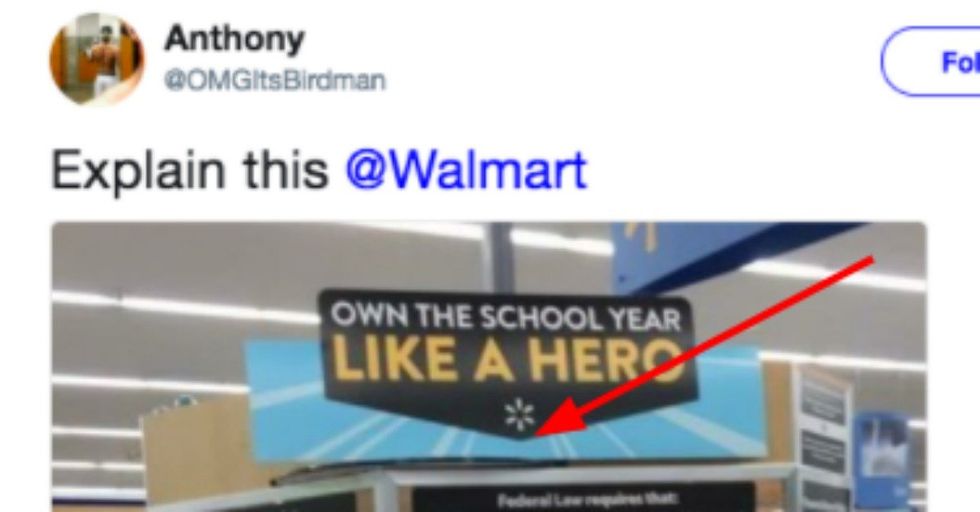 Walmart is the go-to store for back-to-school supplies. It's got everything you need for a successful year: notebooks, folders, pens, backpacks, etc.

But the store is currently under fire (pun intended) for an extremely misplaced sign.

Get ready for your jaw to drop.

As the nation's largest retailer, it's expected that Walmart will be the center of some controversies regardless of how the store operates.

For better or worse, it's an American institution that serves millions of customers every day. With that level of operation, it's going to be in the public eye no matter what it does. Heavy traffic and social media will certainly turn a small story into a big one with such a big brand name.

With so much attention on the retail juggernaut, it's always in a vulnerable position.

Sometimes that's the result of perceived stances on social issues. Other times, it's simply because a single employee at a single store didn't think something through.

As you'll see, it just takes one error in judgment for social media to do its thing and cast a cloud over a gigantic corporation.

Walmart may live by its ubiquity and popularity, but it will die by it, too, as you'll see. If you've ever wondered why standards for large companies are strict, this is it. To avoid scandals that have some swearing off the company.

Or maybe there's no term for it. But the effects are very real, and the company is still feeling the blowback from what some feel is an innocent mistake. Others feel it was a mistake so tone-deaf and insensitive that it borders on negligence.

The mystery is continuing to unfold about an incident at a Walmart store on August 9.

Spoiler alert: Walmart messed up. The good news is they seem to be trying to responsibly handle the situation. See for yourself the strange story on the next page.

Around noon on August 9, a Twitter user named Anthony posted this photo.

Uh, what? This back-to-school sign seems to be placed on top of a display of guns. It's unfortunate placement, to say the least. Right now, Walmart is looking like it's encouraging school shootings.

Given the current climate in the United States, it's easy to see why people would take note of this.

Whether or not it's worthy of the public's ire is another story altogether, but it's certainly...noticeable. It's also safe to say that this isn't in any way "positive" press for the store.

Which, of course, it wasn't doing intentionally.

Walmart was quick to respond. They immediately removed the sign.

But it still wasn't clear how the sign ended up there to begin with.

They responded seriously and urgently to the numerous tweeted complaints about the sign, indicating that they were taking the incident very seriously.

It would make sense. You'd think a company like Walmart would have strict regulations about how their products are displayed to make sure mistakes like these don't happen. Maybe they do, but the backlash was swift and severe nonetheless.

As they should have. This was an egregious error. There have been over 200 school shootings in the United States since 2013. It is not a subject to be taken lightly.

But the real story behind this misplaced sign isn't yet clear.

While one Twitter user identified the store as the Walmart in Evansville, IN, one tweet from Walmart seems to deny that the sign had been posted at all.

That's the type of response that, if proven false, could damage the company's reputation forever. Whether the sign is right or wrong, or in poor taste, the company certainly has the resources to figure out if it EXISTED.

So what's the truth here?

It's not this photoshop job involving Nintendo Switches, that's for sure. This is the case of the mysterious enormously inappropriate sign. While it seems like Walmart is taking the situation seriously, this is a bad look. School needs to be a positive, safe place, and stunts like these, whether they're mistakes or pranks, only stoke a worrisome fire.

Realizing this was quickly turning into a no-win situation for the store, Walmart issued an apology.

Whether or not it's sincere, or just a practical PR move remains to be seen, but given the sensitivities here, it's understandable why the company would want to get some closure on this and move on, even if it was the work of rogue pranksters.