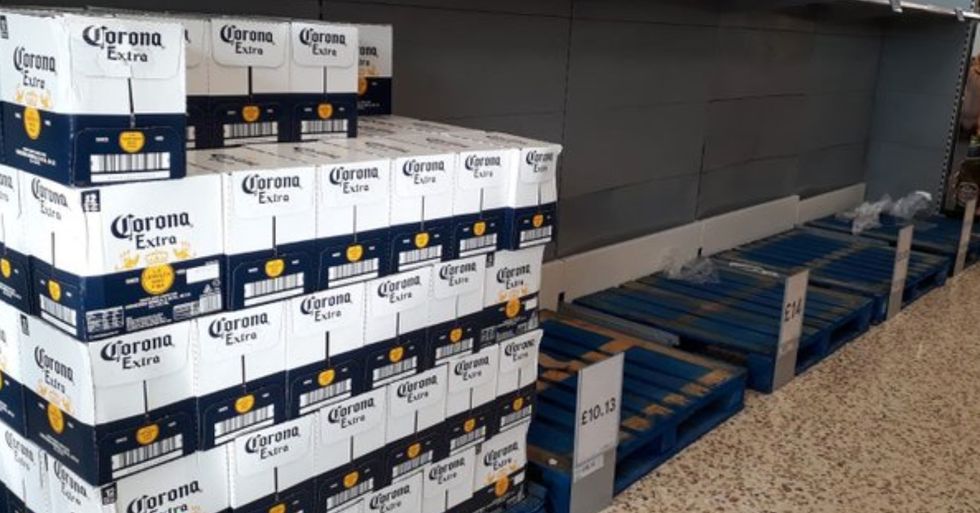 People Are Panic Buying Every Kind Of Beer Except For Corona

Amid all the (rather ridiculous) coronavirus panic shopping, it seems that the shelves are bare.

The aisles are mostly empty, even the alcohol aisle.

Although there is one kind of beer people simply will not buy. Keep scrolling for the shocking pictures...

Alcohol may be the only thing getting us through this global pandemic.

COVID-19 has turned the world as we know it upside down.

At the time of writing 550, 536 people all over the world have now been infected with the virus...

And, devastatingly, a staggering 24, 903 more have been reported to have died from the illness.

The virus has been alarmingly quick to spread, with cases now being reported all over the globe.

And the virus is not showing any signs of slowing down.

And, in their panic, many have been taking to supermarkets to stockpile on supplies.

And older, more vulnerable people who struggle to get to the supermarket often have been left with nothing left to buy. Things need to change.

But, despite the frantic panic buying...

There is evidently one thing that shoppers are reluctant to buy.

Yeah, the alcohol shelves are pretty much empty aside from that one beer.

People are avoiding the beer, Corona, because of the coronavirus.

In some shops, the shelves are still piled full of Corona .

No, we can't believe it either.

The fact that the similarity in names has put people off buying a whole brand is simply shocking!

It's still the same beer as before...

It just has a pretty unfortunate name.

Would it put you off? Keep scrolling for all the TV shows and movies that have been postponed due to coronavirus. Is your favorite on the list?