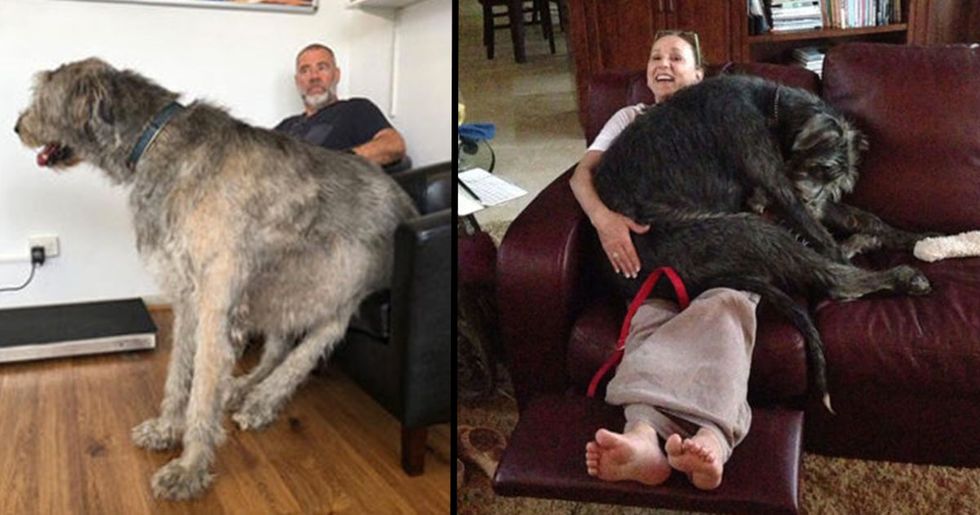 We can all probably agree that dogs are the best. Not only are they man's best friend, but they are ridiculously cute - not to mention hilarious.

Irish Wolfhounds are one of the oldest dog breeds on the planet. They're also known for being infectiously friendly, patient, all-round delightful, and exceptionally large.

In fact, they grow so big that anyone who isn't familiar with this breed would probably get quite a shock if they encountered one.

Whether you're simply intrigued to see more of these huge pooches or are desperate for some cute and hilarious content, look no further.

Keep scrolling, as we reveal the top thirty most hilarious and adorable pictures of these gentle giants. But, be warned, number 1 may make you laugh out loud...

This pooch was clearly very happy to see his owner...who he is literally the same size as.

This dog is so large that an entire little puppy fits snug on his paw. He certainly looks unsure what to do with himself though...

This pooch still insisted on getting comfy at his owner's expense. He's still a lap dog, right?

27. Look at those happy faces.

Jazza And Gandalf certainly looked thrilled to be chasing whatever it is that's keeping them so occupied.

Despite his best attempts, we have a feeling that this pup won't be fitting into that chair.

After a long, hard day at the office, this dog is calling it a day.

Judging by the kitten's face, she can't believe the size of that mouth either.

We think that this pooch may have heard some thunder. But it's okay, cuddles from his owner will make him feel better!

Is this some kind of new pilates move we haven't got the memo on yet?

21. He needs his teddy with him at all times.

This is probably one of the most adorable things we've ever seen.

20. It looks like this dog doubles as a couch.

His enormous body obviously came in handy for his other doggy pals.

We can't figure out who's taking who for a walk.

This pup may be massive, but he's such a gentle giant.

17. This kitten has bagged the cosiest spot in the world.

This is the maximum distance that we would be keeping from one of these precious doggies.

One definitely stands out more than another.

That's a lot of mouths to feed, but a whole lotta cuteness to go with it.

13. There is so much adorableness in this pic.

Let's be honest, the Irish Wolfhound definitely outsizes the rest of them.

Beep beep, this loyal pup has 2 dachshunds in tow. Isn't this one of the best things you've ever laid your eyes on?

That's one big couch. Either way, the owner got well and truly kicked off, that's for sure.

This pup seems to have got himself into rather a pickle trying desperately to get into the chair. Mission completed - sort of... he did manage to get onto the chair after all.

9. These 2 are quite literally opposites.

But they're still best friends.

These 2 are making full use of the sinks. Who even has dog bowls anymore? That's so last year.

He looks so content... even if it is quite a squeeze.

6. Erm, are you sure that those are the right beds?

At least his butt will be comfy for the night.

He's certainly determined to sit on her lap, even if it means crushing her.

Props to the owner for even being able to lift that big boy.

Although his face says otherwise.

Taking the top spot for the most hilarious and adorable snap is this picture. We honestly have no words other than this is something we didn't know we needed in our lives.