There are no longer family stereotypes to abide by. | 22 Words 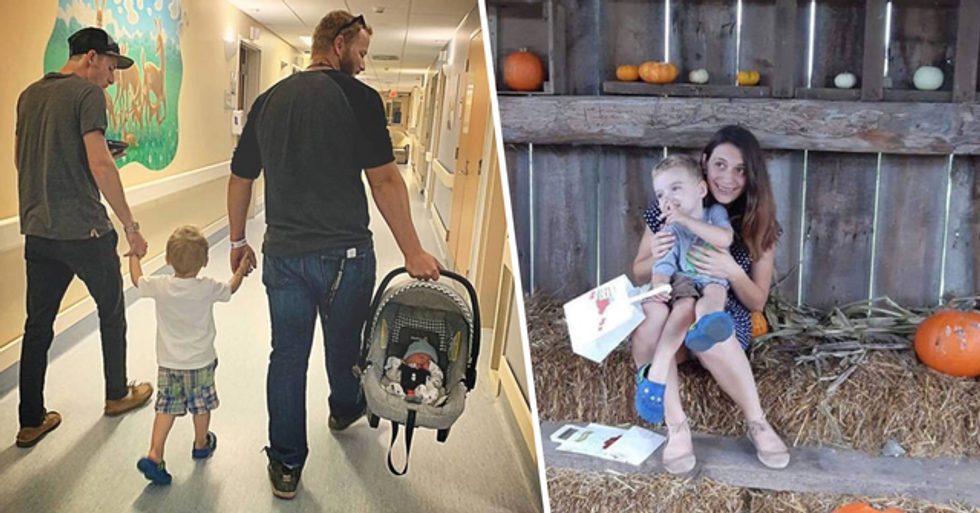 A woman has gone viral after she proved that broken relationships don't necessarily mean a broken family.

The mom-of-2 shared a heartwarming photo of both her fiance and her ex-partner leaving the hospital with her newborn together, while both hand-in-hand with her eldest son. The photo was posted to Facebook and quickly went viral, with social media users sharing their own heart-warming co-parenting stories...

A broken home can often result in a broken child.

Divorces and relationship breakdowns are always difficult, but they are even more so when there are children involved.

A family being separated is never going to be easy...

And it is always the children who suffer the most.

And, despite sharing a child...

Many newly-separated couples find it difficult to maintain a civil and happy relationship following their break up.

But, there are some couples out there who defy the odds...

And, despite an emotional and difficult break-up, manage to remain friends and continue to co-parent their children without any hostility or drama.

More and more separated couples are remaining friends in order to continue bringing their child up together.

And there's one mom in particular who has the co-parenting game down to a T.

Madison Holley, from Ontario, Canada, recently went viral after she shared a heartwarming photo of her slightly unconventional family set-up.

The first being from her previous relationship with Tyler Mcilveen - After the birth of their child, however, the couple split up.

Madison admits that her break up with Tyler was difficult...

She told CafeMom that when she first broke up with her ex and father to her eldest child, Cade, it was "very hard mentally." "We were in different places and I’m very headstrong, so it was hard for us to agree on things," she recalled.

And, when Madison went on to meet her new partner, Cody Pietz...

The strain on her and Tyler's relationship only intensified. "When I met Cody, me and Tyler barely talked," Madison admitted. "We didn’t want to even see each other. Cody used to message Tyler for me, believe it or not."

It was a difficult couple of months for the family...

But, 6-months after Madison and Cody started dating, Tyler met a new partner of his own.

This is when Madison noticed a positive change in Tyler's attitude...

"Meeting Karin [Tyler's partner] was when we both became happy again. I think meeting new people who put our child first and respected that we had Cade together no matter what and us both being happy again helped," Madison explained.

And Tyler's new partner was actually the reason behind their make up.

"She was the one who suggested we all sit down and put all our differences aside," Madison continued. "Leave the past in the past and everything that hurt or upset any one of the four of us resolve right then and there, so that the future was nothing but positive and full of love from the four of us for Cade!"

The 2 couples reached a compromise...

And were able to reach an agreement where they could talk civilly and always leave the table on good terms - For Cade's sake.

But this compromise was put to the test...

When Madison and Cody were suddenly expecting a child of their own.

Madison and Cody welcomed their new son, Waylon, to the world. Tyler brought Cade to the hospital to visit his new little brother and, when bringing him home, walked alongside, hand-in-hand, with Cody and Cade.

And, after sharing it to Facebook, the post quickly went viral, with thousands of people commenting on how lovely their unique family set-up is. "Honestly, ninety-percent of the people say things like, 'That’s how it should be,' and 'Very proud of us,' and 'Mature to put the child first,'" she says. "The odd people say negative things like, 'I shouldn’t be friends with my ex,' 'It’s messed up,' and some people just say things like, 'I shoulda been married before having kids' ... but it doesn’t phase me."

One Facebook user shared this adorable photograph, writing, "The two guys in the back being goofy are my dad & my stepdad walking down the aisle together. They are best buddies. This is second nature to me because this is how I was raised."

There are so many unconventional, yet happy families out there...

There are no longer family stereotypes to abide by.

"My family! Both dads are a huge part of my children's lives. I'm standing next to my ex, but still a great friend and parent partner with our son."

Madison, Cody, and Tyler are great examples of putting your kids first...

And they just go to show that, no matter what has happened in their relationships in the past, their children will always come first. However, it isn't always as easy for all divorced families. Luckily, there's a website that helps Santa to "find" children from separated families... Keep scrolling for more.