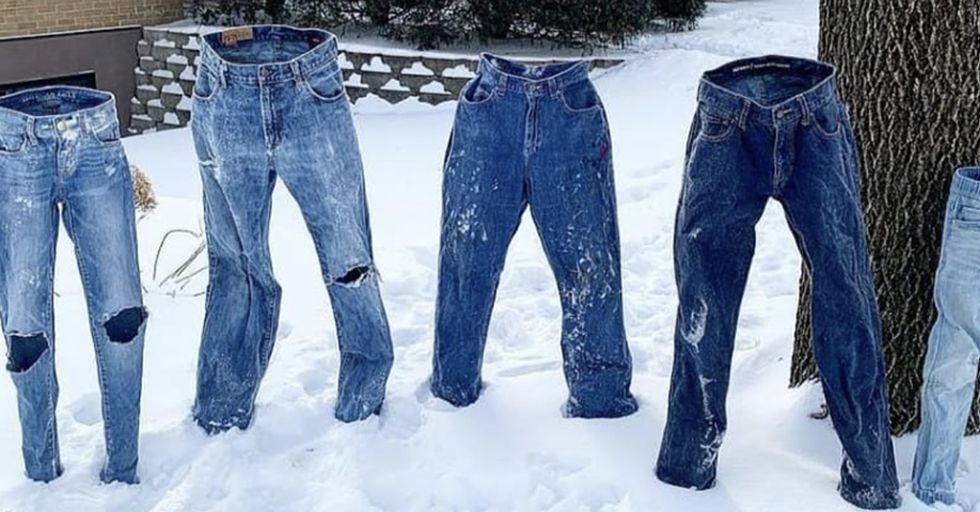 If you’re lucky enough to live in one of those magical places where winter is barely a thing, you may not know just how cold it is in some parts of the world right now. I’m not just talking about your classic winter wonderlands either. Yes, Antarctica, Siberia, Alaska, and The Poles are all as cold as ever, but this year a few unusual places are experiencing a bone-chilling cold.

The polar vortex being driven from the north down to the American Midwest has made it practically impossible to do, well, anything if you live between the Dakotas and New England. Record low temperatures shut down airports, trains, buses, schools, businesses, and even power in many homes. Cities are suffering an unprecedented cold they were not prepared for, and now all they can do is wait.

Well, waiting gets old pretty quickly. To avoid cabin fever, many Midwest residents have started experimenting to test the limits of the polar vortex. The most popular trend to emerge, and probably most startling, is freezing jeans to make it look like there’s an invisible man standing in them.

Cities in Illinois, Iowa, Minnesota, the Dakotas and more have been freezing in temperatures as low as 60 below zero.

The record-breaking temperatures are a result of a polar vortex.

An unusual heat spell from Morocco was displaced toward the North Pole, causing a split in the polar vortex that shifted cold air south to the states.

Now Chicago is colder than Antarctica.

With the wind chill factor, the city is reaching temperatures that can actually freeze your face off within 15 minutes.

This 53 foot tall Minnesota waterfall is the latest natural wonder to be solidified by the vortex.

Because the city has been colder than Siberia for over a week.

People are trying everything to stay warm.

Local government officials have urged residents to stay indoors to avoid the risks of extreme cold.

But the vortex isn’t stopping at the door.

People have been dealing with frozen pipes and a number of other cold weather disasters as a result of the record-breaking temps.

If you can’t beat the cold, eat it?

Engulfed in a miserable frozen tundra, some residents have gotten creative to keep spirits high.

Some of their experiments are pretty beautiful.

Why didn't anyone tell me that a frozen bubble is basically a real-life snow globe?

Others are even more beautiful.

Maybe she’s born with it, maybe her hair is frozen solid.

One of the wildest trends to emerge from the vortex is the frozen jeans movement.

It’s so cold that these jeans are standing up all on their own, no sticks or strings included.

It’s fun for the whole family.

Denim of every size and shape can get in on the frozen action.

Here’s how they do it.

They don't have to be jeans.

@DylanDreyerNBC Did you happen to see any frozen pants like this while you were here?? It’s actually a thing here w… https://t.co/MXDLdjAnQm
— Jo Vaughn (@Jo Vaughn)1548864506.0

Especially if you’re just coming out to grab the mail like this pair clearly is.

You might get tired of standing around in the cold.

So take a load off an enjoy a good book in this cozy weather.

Or go outside and get your blood pumping.

The best goalie is famously one that cannot move, as long as you’re on the opposing team.

You can even freeze yourself a boyfriend.

If you didn’t lock one down before cuffing season started.

Or just put your old pants to work.

Although having your jeans do your chores does kind of feel like the beginning of a Goosebumps novel...

Confirmed, my fear instincts were right on.

I feel like this is supposed to be cute, but it's actually straight-up terrifying.

These things are really frozen solid.

Who needs laundry starch when it’s -50 degrees outside?

And they stay frozen.

This is what I see at the end of my bed when I wake up with sleep paralysis.

Many are trying to make the most of the bitter cold.

When the anonymous stranger who booked hotel rooms for homeless people during polar vortex turns out not to be a Ch… https://t.co/8A0UjSmIeY
— Mackenzie Mays (@Mackenzie Mays)1549047829.0

But those without a warm home to return to are struggling as the polar vortex wears on.

After seeing fellow Chicagoans suffering on the street in sub-zero temperatures, Payne spontaneously paid for hotel rooms to ensure they had a safe place to sleep.

Wow, I’m so inspired by Candice and grateful for all that she and so many others did to save lives and keep people… https://t.co/Md9gbqlLue
— Tammy Duckworth (@Tammy Duckworth)1549124640.0

Since the story has gone public, donations have been pouring in to help pay for 60 hotel rooms for the week.

Others have been inspired by her act of kindness.

After one woman paid for hotel rooms for homeless people in Chicago during the polar vortex, an army of strangers… https://t.co/OpbGBxGqsQ
— CNN (@CNN)1549050006.0

Private donations of food, amenities and funds are helping sustain local populations who otherwise lack the resources to survive the extreme weather.

Clearly, this is no weather to be caught outside in.

Temperatures are reaching dramatic lows not seen since 1985.

It can’t be too long before everything thaws out again, right?

According to our favorite prophetic groundhog, spring is just around the corner.

The official Groundhog Day groundhog, Punxsutawney Phil, did not see his shadow, which means per tradition that winter is coming to an end.

So make the most of your frozen denim days while you can.

But honestly, there’s really nothing that can beat this perfect landing.