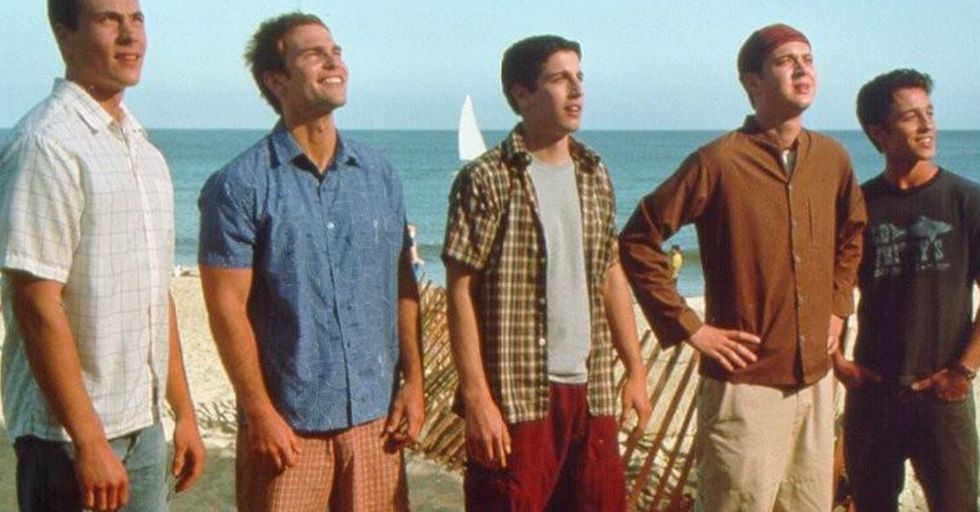 People Are Re-Watching 'American Pie' and Realizing Something Awful

In the good and holy year of 1999, a cinematic experienced graced movie screens involving a teenage boy and a precarious pie. The film was the epitome of teen raunch and late '90s crudeness. It launched a hundred famous one-liners and made everyone look at flutes differently.

The movie in question is, of course, American Pie. In 1999, I was ten-years-old, and American Pie was absolutely forbidden to watch, which made it all the more intriguing. If you're familiar with the comedy, you'll know it's ridiculous and gross nature.

But what you might not know, is that the film hasn't exactly aged well. It's nearly twenty-years-old, and there are of plenty of jokes and plot lines that are best left in 1999. Plus, there's been a recent resurgence of people watching American Pie– and let me tell you, they are not happy with the blatant sexism, misogyny, lack of diversity and terrible jokes.

If you were to rewatch now, it's very obvious that this is a movie that could not be made in 2018.

This dad gets it. Also, can you imagine watching any of these movies with your dad? AWKWARD.

Watching American Pie, and I never realised how sexist and misogynistic this film is
— Aimee Clift (@Aimee Clift)1428260219.0

Things were definitely different in the '90s.

Who knew this movie was still being talked about?

There really are a LOT of sequels.

American Pie is one of the worst movies of all time. This may be an unpopular opinion but I’ve always hated it and… https://t.co/wnxKiAbzc1
— Victoria Leane (@Victoria Leane)1532583723.0

Hollywood loves milking franchises for all they're worth.

Some people are over the hot takes.

This person is over it.

These movies are a particular brand of humor. Only certain types of people enjoy it.

You are not alone, my friend.

In fact, many people agree with you.

A '90s sex comedy that is also depressing? Fun!

One more time for the people in the back! Testosterone is not a qualifier.

Is this the through-line of the entire franchise?

These movies are insane. Right?

It's honestly on TV all the time. Who agreed to those syndication terms?

Which is kind of hilarious, since it has to be so heavily censored. It has to be at least an hour shorter on the television.

Some people still find it funny.

To each their own, I guess. I'm personally wouldn't like to watch a movie based on its few "moments" of hilarity.

This movie isn't the only thing that doesn't hold up to today's standards. Many other pieces of entertainment have similar qualities.

There are so many TV shows and movies that have cringe-worthy moments. Like Friends.

Let him play with a barbie, Ross!

If the Friends episode about Ross trying to convince his son to play with “manlier” toy than a Barbie came out toda… https://t.co/mDZSaCsds0
— Arpita (@Arpita)1514601505.0

This whole situation would not fly in 2018. Could you imagine the number of outraged parents? No, thank you.

Monica being shamed because of her weight as a teenager is an atrocity.

It's so hard to overlook this storyline since it's a runner throughout the series. It's the worst.

Leave Monica's past self alone.

Moving on from, there are still other movies and TV shows that don't hold up...

The '80s were so weird. These two movies need to be officially retired.

This is an abomination.

Just thinking about this racist casting is nauseating.

You'll notice that the Bond films are the MVP of sexist movies. They are so bad.

WHO KEEPS ALLOWING THIS TO HAPPEN?

Someone make it stop. And yes, I agree– the Adam Sandler movies are awful.

Every character should be Leslie Knope from Parks and Recreation.

This one is bananas.

It's a Wonderful Life is a fantastic movie, but Mary becoming an "old maid" is ridiculous.

This is a very valid complaint.

And unfortunately, Hollywood doesn't seem to be doing much better about it in 2018.

Being a lady is overrated, y'all. It's starting to have more cons that pros.

Can you imagine a world where movies aren't sexist?

James Bond was the MVP of sexist movies.

Can we have a female or POC James Bond? Please!

If you're going to watch an old movie, it's safe to assume it probably doesn't hold up.

It's better to know now rather than later.

The children are the future!

The problem with introducing your old favourite movies to your kids is that it becomes painfully obvious how terrib… https://t.co/uI20tkcxsd
— Skullcat (@Skullcat)1536782939.0

May they create and enjoy better entertainment than generations before them.

This is insanely true.

Ugh. I can't even explain how much this irritates me.

There are so many movies and TV shows that aren't great.

But there are also so many amazing ones out there that aren't racist, sexist and homophobic, and they're just waiting to be picked for your next movie night. Share this with your friend who still loves American Pie.