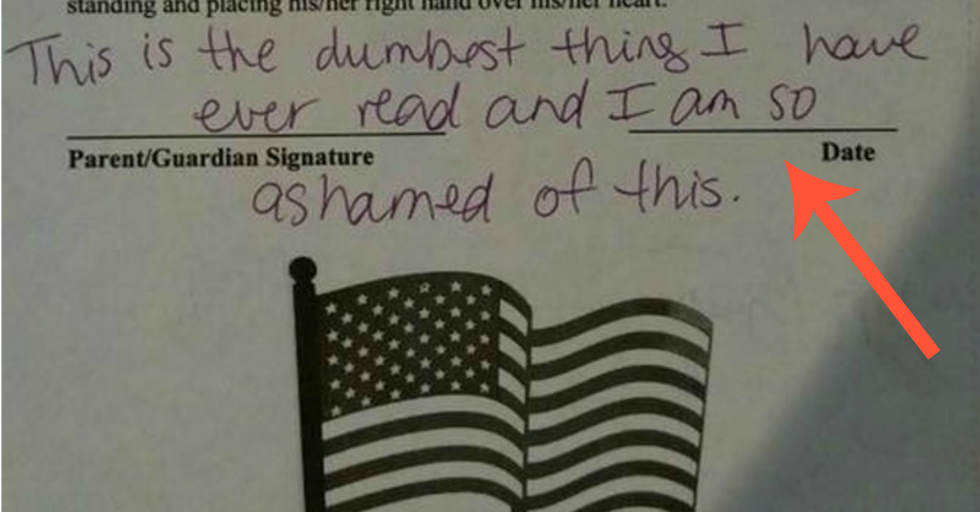 As a kid in elementary school, I remember saying the Pledge of Allegiance every morning. It was just part of the routine.

Given the fact that the words "under God" are included in the Pledge, it's no surprise that in today's politically correct environment, some parents would take issue with having their kids say the Pledge every day.

But recently, the Pledge of Allegiance has become a hot-button issue for a number of reasons.

It had been ingrained in our culture for so long that many people just gloss over it.

It seems the most vocal people are FOR the Pledge of Allegiance in schools.

In fact, many think it should be present in other walks of life as well. Adults should stand as well, in their opinion.

The people who want it gone aren't really AGAINST it, they just think it's sort of...silly.

Some argue that people droning the same thing every day lose sight of what the meaning of the words are. It's a fair, if unpopular, point.

But the controversy has gotten incredibly heated in recent years.

No matter which side you stand on, stuff like this is just totally unacceptable. However, it was a more civil dispute that had the Internet and all of America talking when a woman revealed a document from her child's school.

To address this issue, a school decided to send this letter home to parents that allowed their children to opt out of the Pledge of Allegiance.

When the waiver was brought home to his niece, Micah Brienen took extreme exception, as did the little girl's mom, who expressed her frustrations by replying that she was ashamed of it.

Brienen posted the photo on Facebook and it has since been shared more than 5,000 times and was also the subject of a Fox News feature.

After his post went viral, Brienen updated the comments to add that the Florida school eventually struck the Pledge of Allegiance request form from student handbooks throughout the district.

Needless to say, they definitely ruffled a lot of feathers. Were they justified in creating the waiver or did it go too far?

Here, the issue wasn't over the Pledge, but over the use of the word "God."

Which apparently is troublesome for parents, despite being, you know, a word. See what all the fuss is about on the follow-up. This isn't the first time something like this has happened.

Many people who may not believe in "God," don't appreciate being forced or shamed into making a statement.

That's understandable, but the form thing goes a little far to cover the school's butts from liability, doesn't it?

This is an important point, too.

We start saying the Pledge before we know what the words mean. If we're to subscribe to them and live by the words, then perhaps a parent's approval should be required.

As with any long-lasting tradition, things can get a little..nit-picky.

That's not really what this controversy is about, but it proves people can find controversy in lots of different ways.

It's unlikely that making sitting during the Pledge illegal is going to do much good.

People tend to revolt when matters of preference become law, especially for something as divisive as this is!

So what do you think about all this?

It's possible that everyone's being really, really silly in the matter, but you likely have a side you stand with more than the other, so let it be known...at your peril!