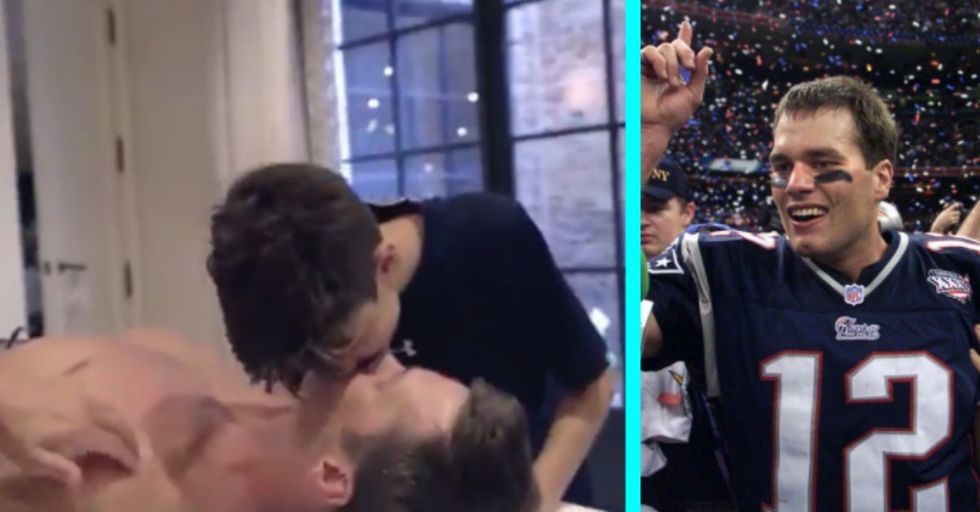 We're just a few days away from the Super Bowl and Tom Brady has officially taken over the news cycle. The only strange thing about that is the fact that it is not for any football reasons.

It's because of a kiss that he shared with his son. And people have a lot of thoughts about that kiss.

Tom Brady is quite the character.

He's very, very good at football, but for one reason or another, he manages to make headlines for things other than being an exceptionally good athlete.

For instance, there was that whole Deflategate scandal.

After winning the Super Bowl in 2015, the Patriots came under fire for allegedly using deliberately under-inflated balls during the game. As the team's quarterback, Brady was suspended for four games of the 2016 season. (Although that didn't stop him from winning Super Bowl MVP that same season.)

Tom Brady may be one of the pickiest eaters in the world (pretty bizarre for someone who's nicknamed GOAT, amiright?). He claims that he's never tried coffee. And strawberries? Don't even think about talking to Tom Brady about strawberries. "I’ve never eaten a strawberry in my life," he once told a New York Times reporter. "I have no desire to do that… Absolutely not." OK then. Moving on.

The latest Tom Brady "controversy" is actually about his family.

Brady is the father of three. His oldest son, John, is from a previous relationship. He also has a son and daughter with his wife, Brazilian supermodel Gisele Bündchen.

Specifically, people are talking about the fact that Brady kisses his kids on the lips. Now, I want to be clear, here. I don't think there's anything wrong with parents showing their children affection. I also think we as a society have some pretty messed up views about men showing affection. That being said, there's a video going around of Tom Brady kissing his son, and, well, it's really something...

OK. There's clearly a lot to unpack here.
Let's start with the fact that Tom Brady is half-naked and lying down. Again, it's not bad to kiss your kids! But this is just not great optics.

Then there's the fact that his kid (who, by the way, is 10 years old) actually gives him one kiss, and Tom Brady complains that it's "barely a peck." His son has to turn around and come back to give him a better kiss.

And then there's the length of the kiss. Boy howdy, that is a looooooong kiss. If Tom Brady held onto a football for as long as he held that kiss with his 10-year-old son, he'd probably get sacked. And his kid doesn't seem to like it, either. Notice how he immediately wipes his mouth off after both kisses.

Like I said, I'm not here to cast aspersions, but...this is weird, right?

I'm trying to imagine if it'd be as weird if it was a woman kissing her daughter, and I've come to the conclusion that yes, it would. That is a weird kiss for any two people to share when one of them is the parent of the other. What do you think? Is the kiss totally innocent or crossing over into bonkers territory?