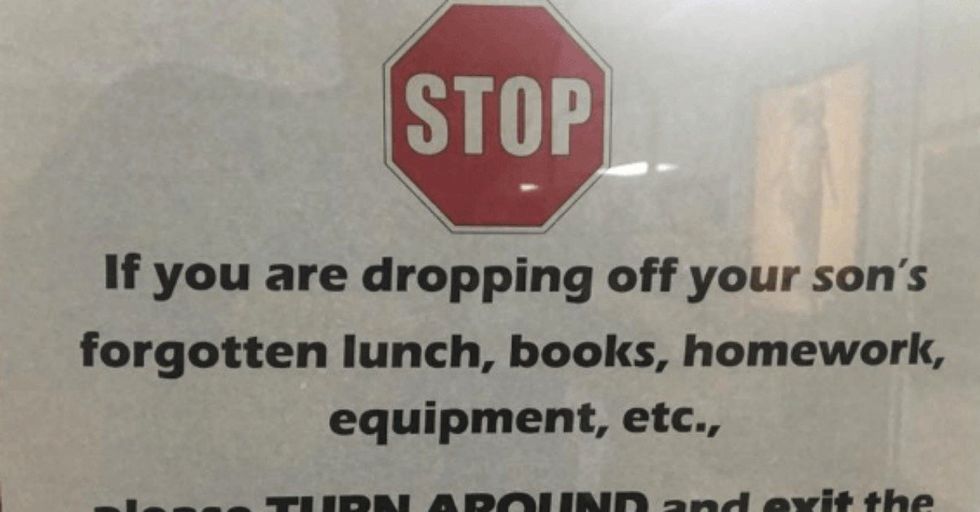 People Are REALLY Ticked Off By This School's Passive-Aggressive Sign

One high school in Arkansas has really lit the Internet on fire with a sign they put up that had an interesting request for parents on it.

What was the request?

And so Catholic High School for Boys in Little Rock, Arkansas recently attempted to teach kids important life lessons about independence. Though they might not have gone about it the best way.

And it caused some parents to just freak out.

They posted this sign, one that has since been shared more than 120,000 times on Facebook and counting.

It's pretty self-explanatory, and the comments went from agreeing that it was a good way to teach them a lesson to "clubbing baby seals" level of outrage.

That sounds like a healthy learning environment for kids...

The view from a teacher.

She made some valid points, but elementary school is a bit different than high school. How did Catholic High respond?

The principal of the school, Steve Straessle responded to the backlash.

“It’s not to deny anyone food. It’s to help students think beyond the default switch of calling on parents to bail them out," he said.

One could argue that calling their parents is a form of problem-solving, but to each their own.

Others just had a problem with how the sign was phrased.

The underlying message isn't terrible, but the way they phrased it was a bit rude. The school wouldn't like it if the parents spoke to them in such a condescending manner, certainly.

Some argued that since the parents are paying the school that the school should be quiet.

But it's kind of the opposite in reality - private schools are able to impose all kinds of rules and regulations. The debate didn't end there though. In fact, it was just getting started.

There were those sticking up for the school.

At least he gave the warning.

One of the main points that came up when defending the school is that it is a high school, and by the time students are in high school they should be responsible.

But if you think back to when you were in high school, how responsible were you really? ...yeah, exactly.

There was even more firing back.

An ironic part of Little Rock Catholic High attempting to teach kids how to prepare for the real world is that in the real world, you usually can go back and get something you forgot.

If the school won't let the children call their parents to bring them something, then perhaps they should let the students go get it themselves.

One thing is clear though, and that's that the school couldn't really care less if they tick people off.

But eventually, one Reddit user ultimately solved the problem for good.

Problem-solving at it's finest!