People Share the Best Decision They Ever Made | 22 Words 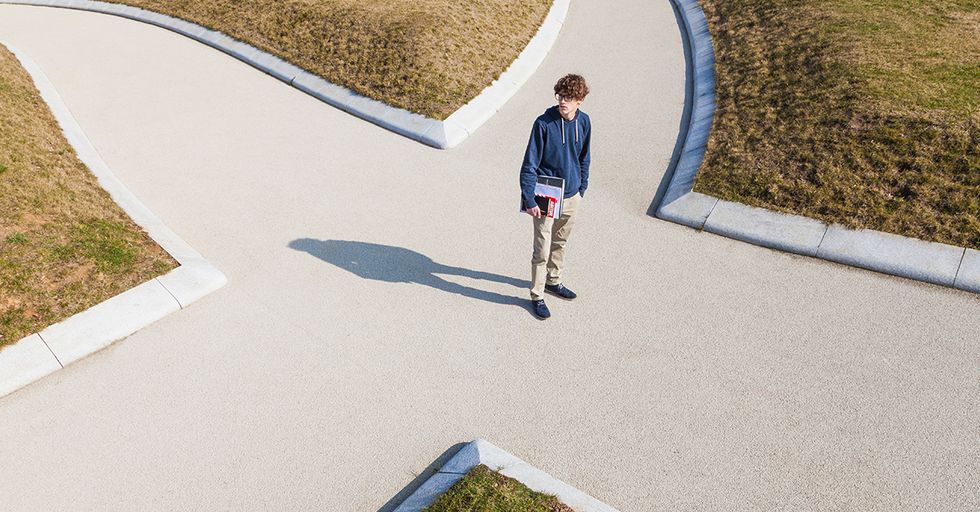 Do you what the best decision you ever made was? Maybe you told someone you loved them, or embraced your true identity, or upended your whole life and began on a new adventure! Or maybe you are young and still finding yourself and hope that the best decision you will ever make is still some years down the line. Either way, reading this list, where people decided to share the decisions they made that changed their lives for the better, will hopefully inspire you and comfort you.

No matter how hard life is, you can still take the reins and make decisions that will have real, lasting effects on your life. Not every decision you make will be the right one, but as this list will show you, being true to yourself can help and build the life you really want.

Patrick Strudwick, an editor for BuzzFeed UK, started the thread off with this:

He shared the best decision he's ever made, which was coming out when he was 14-years-old, and asked others to share their best decisions. The Internet responded.

This is such inspiring talk for someone who's been struggling with this same decision. Living authentically is the best thing you can do for yourself.

Are there estranged relationships that you regret? You have the opportunity to be the bigger person, forgive, and rekindle them.

Getting sober is so hard. But I imagine that it is almost always worth it.

@PatrickStrud To start my transition neatly 3 years ago even though I knew it would likely end my decade long marri… https://t.co/TOCFzsY6mv
— Katelyn Burns (@Katelyn Burns)1545047115.0

Huge decisions like coming out as trans and beginning the transition process can totally turn your life upside-down. But while it's harder than you think you can handle, if you're being yourself, you won't regret it.

@PatrickStrud Going blonde and I think the results speak for themselves.
— Paris Lees (@Paris Lees)1545045642.0

Sometimes, a seemingly superficial change can make a huge difference! It might actually be true in this case at least that blondes have more fun.

@PatrickStrud Staying strong even when anxiety and depression took over me and fighting against it because now I'm… https://t.co/xm9w8Kdl5S
— Emma Gennard (@Emma Gennard)1544991964.0

Dealing with mental illness like depression and anxiety can feel overwhelming and world-changing. But fighting to be yourself is always worth it.

This is such a complex and interesting life choice that she was faced with. So glad it worked out for her.

@PatrickStrud Best decision:Deciding to do a self exam on my breasts one Saturday night when I was 36,not ignoring… https://t.co/Jnx5VPVIfM
— Victoria (@Victoria)1545086984.0

It's so important not to ignore health issues that arise. It can be daunting to even think about dealing with them, but it's important.

@PatrickStrud Leaving my husband after 21 years and starting to find myself again 😊
— Samantha Farran (@Samantha Farran)1544976953.0

After so much time, it is so scary to leave a bad situation and start over. This takes real bravery.

Ending a marriage can feel world-ending. Your reality is totally redefined overnight. But if it's toxic, leaving is the best thing you can do.

No matter when you decide to share yourself with the world, it will be the best thing you ever do.

Sometimes you have to leave your hometown no matter how bittersweet. I did. And even though it was a rocky road, it was an important thing for me to do.

I mean, I can't imagine moving to Paris being a bad decision. It is worth it for the bread and croissants alone.

People often say that teenagers don't actually know what's best for them, but that couldn't be further from the truth.

Handing a girl a drink

I love this story! It's just the cutest.

This is really sad, but it's a lesson in calling and texting and talking to people just because you're thinking of them. You never know what's going to happen.

I tell you, I avoided the doctor for a long time, and it was a bad decision. Knowing is so much better than not knowing.

Pursue what you are passionate about instead of what you are expected to. It will lead to so much more happiness.

@PatrickStrud My other half & I decided after the Brexit referendum to quit our jobs, sell our house and move to Ir… https://t.co/VpXXTw6yVW
— Cas Smith (@Cas Smith)1545123418.0

Starting over completely is sometimes the exact right decision! It's amazing if you have another person to do it with.

@PatrickStrud This year I left a toxic job environment which had convinced me I was lucky to work there and last we… https://t.co/JyZUctK7Wo
— Jonathan Roberts (@Jonathan Roberts)1545002550.0

It can be so terrifying to leave the stability of a job, but if it's making you miserable, it's never worth it.

I love the stories of how people got together! Also, pets change lives!

You know, a live music show can tell you a lot about yourself. It may seem like a small thing, but it's not.

Taking control of your body and what you put in it is no small feat! Especially if people are so rudely making fun of you for it.

This is huger than you can imagine! This guy is a total inspiration.

@PatrickStrud Leaving an abusive relationship. And not going back no matter how much my brain and heart tried to confuse me.
— Jill Waiton (@Jill Waiton)1544969867.0

One of the hardest things to do is to leave an abusive relationship. It's not easy. This person is extremely brave.

Religion can suck you in and make you forget who you really are. But it also provides stability, so it's hard to leave.

@PatrickStrud Replying to a message from my daughter, who I'd not seen in nearly 15 years. Without her in my life I… https://t.co/XB2BxDOUqr
— Alexandra Forshaw (@Alexandra Forshaw)1544964639.0

Ugh, this made me tear up. This is beautiful.

@PatrickStrud Deciding to see a therapist to sort out my pretty gay head. Lots of us have so much shit to work thro… https://t.co/ndJ05hGMGU
— Barry Woods (@Barry Woods)1545060574.0

It's really hard to make the decision to seek help. But therapy is great. Everyone should go to therapy.