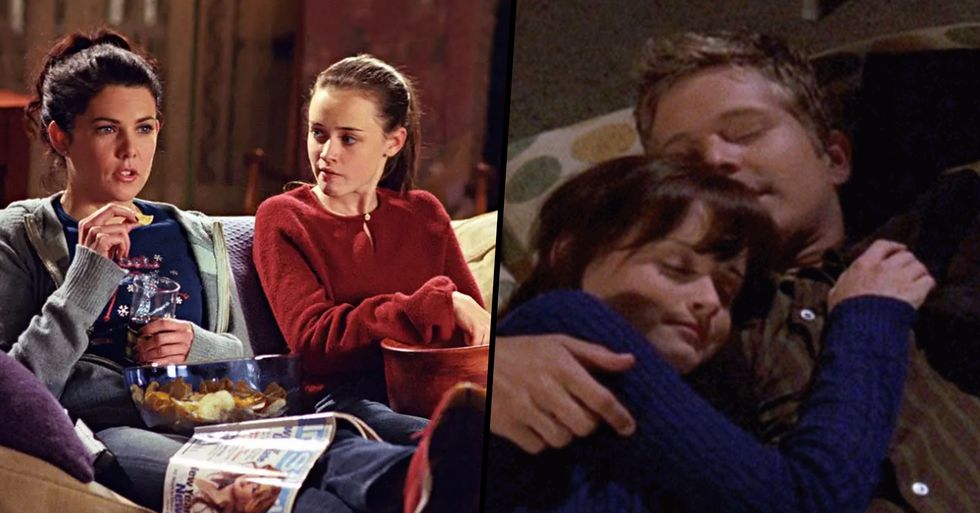 People Are Rewatching 'Gilmore Girls' and They're Furious

After re-watching Gilmore Girls, fans have noticed a big issue with the show, and they are far from happy...

There's nothing like going returning to a show you used to watch years ago.

When you don't know what to binge-watch next, nothing quite hits the spot like a good old slice of nostalgia.

One look on social media will show you the likes of Gossip Girl, Friends, and Desperate Housewives tend to be go-to's when it comes to this.

We've all been there. Rewatching something you used to love years later hits different.

But, there's one obvious downside to this.

Times have changed, and when watching through the modern lens, you start to notice some problematic aspects of once-beloved shows.

This has been the case for fans of Gilmore Girls.

Gilmore Girls is just one of those shows that everyone loved.

The comedy-drama, created by Amy Sherman-Palladino, was a fan favorite of the time, wracking up a huge fanbase.

The show truly paved the way in the noughties.

First airing in October of the new millennium, the series was praised for its strong female cast.

The show followed the antics mother and daughter duo, Rory and Lorelai.

And ran for an impressive 7 years, over 7 seasons respectively.

Television critics at the time gushed over Gilmore Girls for its witty dialogue and cross-generational appeal.

Not to mention the perfect balance between humor and drama.

In fact, the show generally still holds up now.

And the central force of the relationship between Rory and Lorelai Gilmore is just as compelling now as it was back when the show first burst onto our screens.

There were many iconic moments.

Like when Max had 1,000 yellow daisies delivered to Lorelai.  And then he just had to propose afterward. We're not crying, you're crying.

Or the moment that Christopher and Lorelai almost got together...

But then Christopher’s girlfriend got pregnant and ruined everything. Great timing, Sherry.

When Rory shares her first kiss with Dean in the ever-so-romantic Doose's Market.

Gilmore Girls has its problems.

Several fans have been taking to social media after re-watching...

And they all seem to have one common gripe.

Having re-watched the show, many have pointed out the fixation on Rory's sex life.

But here's where things start to get problematic: fans raised the point that when Rory is single and isn't interested in boys or dating - she is successful. But, when a relationship is her priority... everything seems to fall apart.

Now, of course, this can work in terms of the plot.

But one fan named Samantha Grindell, who wrote an article on the matter, pointed out that it reduces her "achievements and failures to a direct result of her relationships with men."

This is a very harmful message to send out to viewers.

In her article, Samantha goes on to say that the portrayal of Rory's dating life  "sends a harmful message to female viewers about the limited ways sex can function in their lives."

She came with receipts too.

"For example in season three, episode 16, 'The Big One,' Paris Gellar, Rory's longtime frenemy, confides in Rory that she had sex with her boyfriend for the first time. Lorelai eavesdrops on the conversation, hearing Rory tell Paris that she has never had sex," she writes. "Lorelai is elated at hearing her daughter is a virgin, and literally says to herself 'I've got the good kid' after hearing that her daughter hasn't had sex."

"Paris' choice to be intimate with her partner shouldn't be any indication of her morality."

This same issue seems to come up time and time again. "That message is reinforced when Rory finally does have sex a year after the debacle with Paris," Samantha writes. "Her first sexual partner is Dean Forester, a married man. The affair leads Dean to get divorced, and it causes a rift between Rory and her mother. The adulterous action and conflict with her mom makes sex an inherently bad thing in Rory's life, and it continues to be as she dates Dean, with the couple repeatedly struggling to find places to be intimate together."

"Plus, Rory runs away to Europe with her grandmother for the summer as a result of the affair, which ends up putting her behind in her career as a journalist. She continues to struggle professionally until she ends her relationship with Dean, getting into a groove as a writer for the 'Yale Daily News' when they start growing apart."

All in all, Samantha claims that the message of "good girls don't have sex" is being pushed throughout the show.

My beloved Gilmore Girls is wonderful for many reasons, but its depiction of Rory's sex life isn't one of them. The… https://t.co/53hQn7vPg4
— Samantha Grindell (@Samantha Grindell)1597698457.0

And that having sex is something Rory shouldn't be doing. What do you think? Do you agree? Fans have also been re-watching Friends and branding it as "horribly offensive." Keep scrolling to find out why...
20%

$11.41 $9.13
Buy Now
See More Deals
We hope you find these deals as awesome as we do! Just an FYI: we may receive a share of sales from links on this page