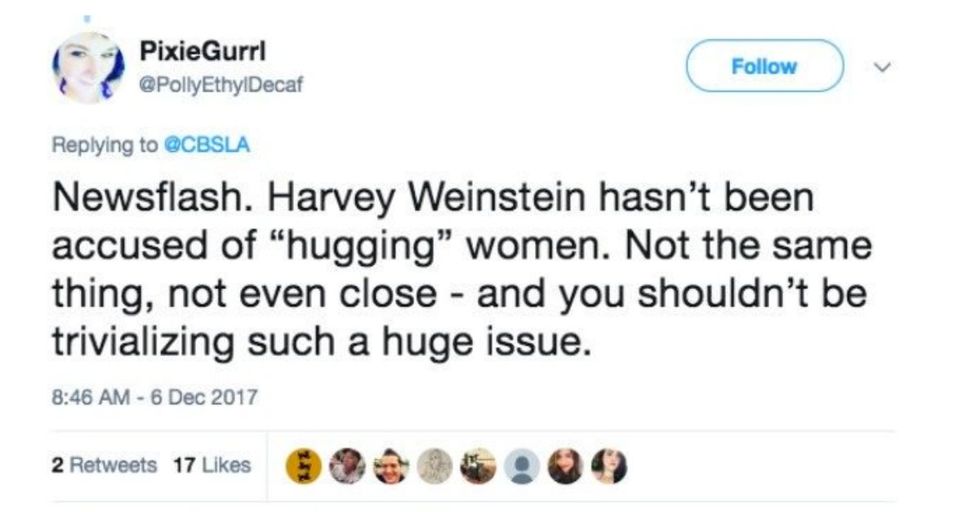 In a (highly) misguided attempt to include yet another sympathetic male perspective into our cultural dialogue of sexual assault accusations in the workplace, CBS Los Angeles printed an article that’s being lambasted on Twitter.

In it, they attempted to bring to light men’s fear over proper workplace etiquette, for those incompetent employees who are unable to see the difference between sexual assault and simple social niceties. (When did the world become so complicated?)

Steve Wyard, who is basically the only person quoted in the article (who is described only as a "veteran sales associate for a Los Angeles company") expressed his perplexity.

He wondered, “have we gotten to the point now where men can’t say, ‘That’s a nice dress’ or ‘Did you do something with your hair? The potential problem is you can’t even feel safe saying, ‘Good morning’ anymore."

Wow, Steve. You best check yourself.

Don’t know what you’re getting into in those back rooms while you're stocking shelves, but clearly you've got some residual guilt to deal with in the deepest, darkest parts of your soul.

The article continued on, as the author resumed digging their own grave at breakneck speed with a high-caliber jackhammer.

They wrote, "After all, if Garrison Keillor, the gentle-natured former host of public radio’s 'A Prairie Home Companion,' can be fired for accidentally (he said) placing his hand on a woman’s bare back, could they get in trouble for something similar?"

Wyard, who blunders more and more wildly with each quote (who wrote this thing?!) provides a brilliant solution to the fraught confusion of workplace etiquette. “Just treat everybody the way you’d want them to treat your sister."

Not that your sister isn't probably great (and might be Beyoncé).

But if Wyard decided to read anything other than the Playboy sitting on top of his toilet, he'd remember that people already got pissed about this reductive perspective. Writer Hunter Harris perhaps put it best in a piece for Vulture:

Only a sociopath needs a daughter — or a sister, a girlfriend, a wife, or even just a lady standing in front of him at Starbucks — to make him queasy enough at the thought of a sexual predator in his industry to do something about it.

Twitter, in the usual fashion, kicked up a high-powered shitstorm.

The responses ranged from incredulous to downright snarky.

Even Chance the Rapper got involved.

And while his Tweet initially led to a flurry of "The Rock" references, the raging hellfire soon quelled into a powerful political discussion.

One user drew a harsh and acerbic observation of the absurdity of comparing a hug to the Weinstein scandal.

Weinstein, who the author equates with your creepy coworker sitting two cubicles away, is now being accused of RACKETEERING. Because he hired a goddamn Third Reich of OPERATIVES, linked to one another "through corporate ties, contractual relationships, financial ties, and the continuing coordination of their activities."

Sorry, Todd by the water cooler, unless you're a mastermind con artist with sociopathic sexual tendencies, your hand brush with Karen as you reach for the same coffee cup (*blush*) ain't on par.

No offense. But if you want some help with etiquette, you should probably give it to her. That's free advice, Todd. Go hug a tree.

But if you need a diagram, as you and Steve clearly do, it is provided (for free) below.

Download it to your corporate-issued Dell PC. Learn it. Live it.

Go hug yourself in the shower, Steve. And Todd. If it makes you uncomfortable, don't do it.

This driveling pile of dog shit published on the same day that women — the "silence breakers" — were honored in Time Magazine.

They came out, in a bold way, to name their abusers — sacrificing their reputations and personal comfort, and allowing themselves to become focal points for this discussion — and their stories were horrific.

So equating this to fear over "hugging" in the workplace? It's a self-indulgent way for men to trivialize the extent of sexual abuse, and debase it through ignorance.

So, Steve, you're scared to hug me? Back atcha.