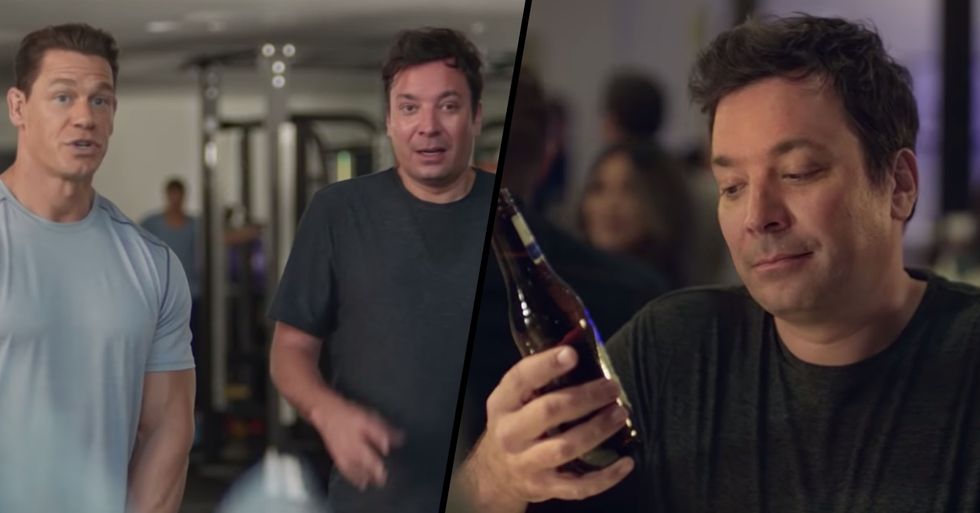 The Superbowl is known for its array of commercials. For companies, it can be hard to capture the attention of an audience, especially if the product you're advertising isn't as exciting as it may sound to you.

However, late-night host Jimmy Fallon and athlete John Cena teamed up with a bunch of other sports stars in order to create an all-star video that has been branded "the best commercial ever made."

Keep scrolling to see it.

John Cena is a monster athlete.

Cena is best known as an in-ring wrestling competitor contracted to the WWE.
Born on April 23rd, 1977, in West Newbury, Massachusetts, the professional wrestler quickly made a name for himself in the squared-circle because of his strength and determination to be the best at the sport.

Fast forward almost twenty years, and he is the biggest name in the sport.

After winning multiple championship belts and breaking many-a-record, the wrestling mogul knew he had cemented his legacy in the ring as a competitor.

He also found his feet in other parts of the entertainment industry.

Venturing out into other branches of entertainment, he managed to secure himself in acting roles. You may have seen him in The Marine (2006) and Playing With Fire (2019). He is also set to be making an appearance in this year's Fast and Furious.

And who could ever forget about his album?

That's right, he's even ticked that off his list. You Can't See Me took the world by storm when it was released in 2005, and even managed to crawl up the charts, peaking at number fifteen.

Currently, he is trying his hand at being a TV personality.

From interviews to day-time show appearances, Cena is currently our promoting his work, switching out his jean shorts and sweatbands for a slick suit and tie.

And recently, the athlete starred in a viral commercial.

Teaming up with Jimmy Fallon, Cena decided he would take the late-night host under his wing to teach him a thing or two about sports.

Fallon gave it his best shot.

But obviously, keeping up with a monster athlete slash wrestling champion slash part-time bodybuilder is more difficult than it sounds.

Here's how they got on:

The commercial starts off with both men in the gym, a dumbbell in their hands. A persona trainer is talking them through their training regime.

From the look on Fallon's face, he is not enjoying it...

Definitely not as much as Cena anyway. Well, with those muscles, I'm sure the dumbbell in his hands isn't posing an issue like it clearly is for Fallon.

By accident, Fallon swings his weight a little too much and lets go...

So it goes crashing through the window and out onto the street, just missing a couple walking past. Yikes.

They decide that Fallon might need to try something else...

So they head to a bar with a carefully poured Michelob ULTRA - yes, wonderful product placement - in order to discuss what they could do. "Working out sucks," Fallon whines, while Cena assures him it'll get better.

So off they go on an adventure to discover the perfect sport for Fallon.

They start off with running track. Probably the worst of the lot, well for people like me... And Fallon. As Cena laps him, Fallon manages to find some strength to continue with the aid of his band on The Tonight Show.

That's right, the legend of running, Usain Bolt gives him that extra push to make it to the finish line.

We then move to golf with Brooks Koepka.

Fallon seems to be more in his element here. He shouts "four" as he swings the putt and manages to hit the duck target that Cena has planted for him.

Things get better for the pair as they move to beach volleyball.

They beat the girls with their powerful spikes...

And the use of trampolines. When the two women ask to swap sides, the men refuse as they continue to bounce up and down.

And the final sport is none other than football.

With lines of paint on his face, Fallon tries to tackle a bunch of electronic dummies standing in his way of victory. And with some extra support from Cena, he manages to do just that.

The two then settle at the bar for another Michelob ULTRA...

Cena expresses just how proud he is with a friendly slap on the back, but Fallon grimaces claiming he's still a little sore. Nonetheless, the two enjoyed their workout.

And we really enjoyed watching the entire ordeal.

Twitter exploded with comments commending the commercial. A lot of them related to Jimmy and said that this was the motivation they needed.

Fallon is so relatable.

This user described it as the "best commercial."

And I wholeheartedly agree.

John Cena is filled with the best quotes.

And if you're in the mood to read more about Jimmy Fallon's heartfelt tribute to Koby Bryant, keep scrolling...