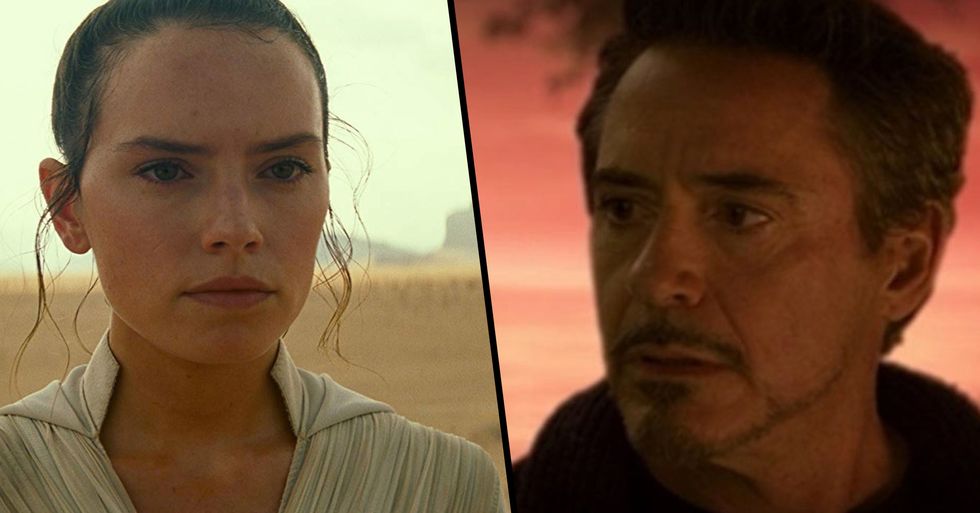 Last week, fans of the iconic Star Wars franchise flocked to their local theatres to watch the long-awaited final installment of the decades-long tale,  Star Wars: The Rise of Skywalker.

Critics and fans alike have been falling over themselves to dish out their opinions on the highly-anticipated spectacle. But it seems not everyone is impressed, with some arguing that the content isn't totally original.

Keep scrolling to see why fans are convinced that Star Wars: Rise of Skywalker is merely recycled from another smash hit movie.

Fans were thrilled by the news of another movie hitting screens this month.

Sadly, the news is bittersweet...

After over four decades, Star Wars: The Rise of Skywalker will cap off the lengthy saga - meaning the beloved franchise has officially come to an end.

The long-awaited movie sees the Resistance face the First Order once again, and the end of the ancient conflict between the Jedi and the Sith.

Well, of course, many fans were truly blown away by the flick, believing the well-loved saga got the spectacular conclusion it deserved. The movie has even received a respectable 7.0 score on IMDb.

But some fans have noticed something pretty, well, unimpressive about the movie...

Several viewers began noticing that the movie had a resemblance to another smash hit - Avengers: Endgame.

In fact, some are going as far as to say Rise of Skywalker is completely "recycled."

And why, you may ask? Well, one fan has created a Reddit thread explaining...

The first complaint came from the final space battle...

In the Reddit thread, a viewer wrote: "Anyone else notice how the final space battle played out like the final battle of Avengers: Endgame? With all the ships (returning characters) popping in on-screen altogether?
"And then there is the semi-final REY moment where I literally ruined a line cuz I knew it was coming... She looks at Palpatine and says 'I... AM...', " they added. "I literally said out loud 'Iron Man!' (I mean more like under my breath [sic] but a couple heard me and one laughed the other got irritated)."

"I just thought the movie was fun, but rushed and compressed to hurry up and close whatever plots from 7 and 8... I just couldn't get over the Avengers: Endgame comparisons lol."

Another fan chimed in.

"Oh yeah. When Lando comes to the rescue I immediately thought of Falcon and Captain America." Over on Twitter, another fan raised the same point: "There’s a scene in the new Star Wars where the villain says '“I am _____' and then Rey answers with 'And I...am _______' In the theater, I reached to my friend and said 'Iron Man'," they wrote. "But this got me thinking; is there a chance TROS was reshot to be more like Endgame; it felt like it."

Others have come up with another explanation as to why the 2 movies appear to be so similar...

"I honestly don't think the movie was rushed and as for the similarities, they're made by the same overall company," pointed out one user. "The movies are both huge and released relatively close together by the same studio. Comparisons are... inevitable," added another. Star Wars: The Rise of Skywalker is out in theaters now. In the meantime, keep scrolling to find out which Star Wars legend has come out as gender fluid.