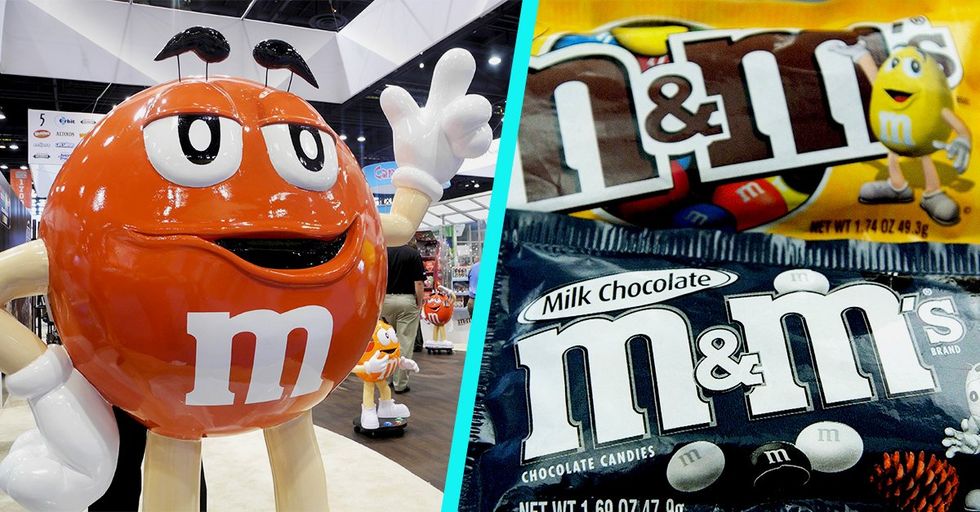 But if you take a closer look at the packaging, you may notice something seriously disturbing...

These days, M&M's are popping up in a huge variety of flavors.

Any day now, you'll start seeing Pumpkin Pie M&M's on the shelves. We're ready for them.

If you're looking for something a little less seasonal, we can't recommend Crispy M&M's enough.

They're just as delightful as a Rice Krispie treat, but they also have chocolate. What more could you want?

It was an M&M we'd all secretly hoped for, even if we never admitted it aloud.

But now, Caramel M&M's are here to stay. Thank the candy gods!

Caramel M&M's are great, but there's something about the packaging that's a little...problematic.

M&M's commercials have featured anthropomorphized candy as far back as 1954. We can imagine seeing the first talking M&M back then was probably a little startling. But in 2017, the arrival of the Caramel M&M brought a seriously dark turn to the living candy story. To see it, all you have to do is take a closer look at the packaging...

When people saw the Caramel M&M's packaging, some were immediately baffled.

Others weren't as quick to notice. But once you see it, it's undeniable.

What do you think? Pretty standard, right? Gooey caramel, etc.?

But look a little closer.

If M&M's are those little cartoonish characters like we've seen in ads... WHY ARE THEY TEARING EACH OTHER APART LIKE SAVAGES?

You can't unsee it. Neither can thousands of candy lovers out there.

Look at them! They're smiling as they rip their friend apart!

Seriously. How did this make it to print?

There has to be a system in place to prevent this kind of candy massacre, right? As soon as the caramel carnage was pointed out, people all over the Internet started sharing their reactions. Naturally, they were incredible...

The (faux) outrage is overwhelming.

"Brethren" is a very nice touch. But it is making us feel kinda guilty for eating a whole bag earlier...

Others met the revelation with a hearty "Meh..."

I mean, what do you think here? Sure, the Red and Yellow M&M's might be ripping their friend in twain, but you were going to eat him!

Think about it. Someone had to pitch this package idea...and everyone in the meeting must have just been like, "Yeah. Cool. Sounds good."

...But on the other hand, people don't necessarily want to feel good or righteous while eating a package of candy. That's not what candy is for.

Maybe this wrapper should read "Shame Size" if you're going to sponsor this savagery.

Or, you can just turn a blind eye and, you know, enjoy your candy. That's what we're planning on.